'The best Chinese is in the North. If they have to stop at the Border it’ll take ages'

Border villages seem to have become playthings in the game of Brexit, but locals have more prosaic concerns, according to artist Kate Nolan's latest project 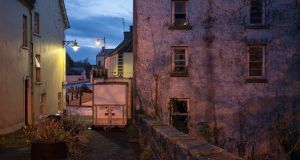 When European parliamentary Brexit negotiator Guy Verhofstadt visited the Irish Border a couple of weeks ago, news reports picked up on one particular reference he made. Standing in a field on a farm in Co Monaghan, he pointed out that the grazing cows felt free to ignore the invisible line beneath his feet.

With a nod to the great Belgian surrealist painter Rene Magritte, he continued: “I’m a Belgian so surrealism comes naturally to me, but to reinstate the Border would be more than surreal, it would be totally absurd, even for me.”

Kate Nolan’s project Lacuna, which currently forms an exhibition at the Gallery of Photography in Dublin, finds a dreamy surrealism in the subject of the Border. She’s also intrigued by the concept of the invisible line that might suddenly, post-Brexit, become a hard, policed border.

She spent a considerable amount of the last two years working with young people in the village of Pettigo, which straddles the Border between counties Donegal and Fermanagh. Flowing through the town to nearby Lower Lough Erne, the river Termon demarcates the division.

Her conversations with locals reveal the Border as a quaint anachronism or a fading memory occasionally recalled with a jolt of clarity: a farmer whose cows were seized by customs officers for grazing on the wrong side of the line, to take an example Guy Verhofstadt might appreciate.

Less divisively, it emerges that a school bus picks up its passengers, ventures south of the Border and then returns to the North before delivering them to their destination, because it’s far and away the most direct route.

Then there’s Milly who, thinking ahead, mentions her fondness for Chinese takeaway food. When Nolan suggests that may not be strictly relevant, Milly puts her right, with a grasp of detail singularly lacking among Brexiteers: “You see, the thing is, the best Chinese is in the North. If they have to stop at the Border it’ll take ages. Plus it’ll probably be freezing.”

Nolan evokes the strange, even surreal nature of the divide through surface ambiguities. The three-screen audio-video installation, with a rich, ambient score by Gavin O’Brien, plunges the viewer into three adjoining projections: the edge of a forestry plantation presents a conifer wall, branches stirring in the breeze, hinting at the depth of the unseen forest beyond.

The Termon flows swiftly and steadily along, offering us a dynamically distorted view of the riverbed. A breeze ruffles the surface of a body of water, presumably Lough Erne, lapping over a subterranean landscape. As time goes by we might be glimpsing vegetation, the sky. But perhaps they are but reflections.

Nolan links the external contours of the landscape with the inner, emotional worlds of the people who inhabit it. She manages to envisage the Border village and its setting as a kind of Tarkovskian Zone, that strange region of difference in his film Stalker. The Zone appears, to all intents and purposes, fairly ordinary, but is set apart from normality. People don’t go there.

That Nolan is drawn to comparable sites may have something to do with the fact that she spent five of her early childhood years with her parents in Baghdad during the Iran-Iraq War in the 1980s.

She has explored this period, of which she has “no real memories, just a sense of experience” by delving into her family photograph albums. They lived both in and apart from the world around them.

In 2014 she self-published a photographic book based on a four-year project, Neither. It was critically acclaimed and went on to win the Magnum Photo Agency and the Alliance Française awards.

Neither documents her exploration of another space of physical and psychological uncertainty: the isolated Russian outpost of Kaliningrad on the Baltic Sea, formerly the East Prussian City of Königsberg. Annexed after the second World War by the USSR and now effectively part of Russia – a Russian “‘island’ within Europe”, as Nolan puts it – its international status remains curiously undefined.

Nolan engaged with a number of young women, “strong, independent women”, in Kaliningrad, “the first generation to grow up after the collapse of the Soviet Union”, and produced an exceptionally rich body of work incorporating photographs and documentation.

She has an evident gift not just for depicting individuals with great empathy, eliciting their intimate thoughts and reflections, but also for placing them in their context. She draws in the landscape, from immediate domestic space to the urban fabric and elements of the natural world, providing emotional texture, depth and complexity, conveying a nuanced sense of the inner lives of her subjects. And we get an intimation of the historical forces that have shaped the place, and the people.

All of this applies to Lacuna, in which the small Border village seems to have become a plaything in the great game of Brexit. The futures of the individuals we see in her photographs will be influenced in ways as yet undetermined by the results of negotiations conducted in conference rooms far away.

In fact, Lacuna is but one project in the Gallery of Photography’s series Reframing the Border, which unfolds over the next five years. It was inspired not by Brexit but to mark 100 years since another fateful political decision: the partition of Ireland in May 1921. By the time of the centenary, the future of the Border, and the people who live along it, will have entered a new phase, one way or another.

Keanu Reeves: ‘Grief and loss are things that don’t ever go away’
10 The guarded words of Trevor Rees-Jones
Real news has value SUBSCRIBE