There’s some seriously strong painting on show, along with a few very surreal ideas 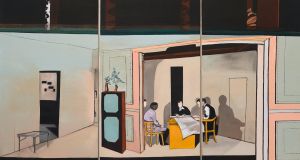 Did you ever wonder how much of your life is performed for an audience – whether imaginary, social media-fuelled, or right there in front of you? Sonia Shiel’s intriguing paintings make a virtue of the uncertainty, as she creates little stage sets for the figures in her scenes. This makes for nice, layered paintings, where you can look, and then look deeper still. Maybe we all inhabit our own stories? Better that, perhaps, than someone else’s. Question is: will it be a tragedy or a farce today? Check out Ragnar Kjartansson’s evocative film Guilt Trip at Crawford this week too, showing as part of the Sounds from a Safe Harbour Festival, which runs until September 18th.

Maybe we shouldn’t be surprised to discover that Ireland has more follies than anywhere else in the world – and that’s not counting political ones. The Jealous Wall at Belvedere Park in Co Westmeath is a gothic ruin, deliberately built to block the view of the house’s larger neighbour. It also has a backstory of jealousy, cruelty and tragedy to match. Five artists get to grips with the idea of folly at the Luan, including the wonderful Miranda Blennerhassett, David Eager Maher and Niall de Buitléar; there should be no need to block anyone’s views.

There’s a great deal of good painting on show round Ireland this week, and Mollie Douthit and Anne Harkin-Petersen’s presence are strong additions to the mix. Alongside Harkin-Petersen’s abstractions, Douthit’s hyper-real, yet softly gentle paintings are frequently more like little meditations on things we might otherwise ignore. Spent matches, a tea towel on the back of a chair, a small sprig of herbs: moments of magic.

Back when film was first invented, it must have seemed pretty paranormal itself. Susan MacWilliam has been working in the medium for almost 20 years, and, fittingly, the subject of her investigations is the supernatural. Mix up ectoplasm, X-ray vision, table-tilting and telepathy, stir in some poltergeist investigations, and you have a recipe for something seriously Other. This large-scale show has been touring, and after Uillinn, you can catch it haunting the Butler, Kilkenny in November.

While huge canvases have us stand back for a better look, you can get really intimate with something small. Stephanie Rowe makes this work strongly in her favour. Her highly wantable paintings, drawing on sources from film and TV, are more like mini moments in which entire narratives have been caught, distilled at a crucial but enigmatic moment. You feel as if you’re eavesdropping on intriguing interrupted scenarios. An alumna of the RHA’s consistently prescient Futures series, Rowe is a seriously good painter, too.