Visionaries or mythologisers? These two titans of Jack B Yeats and Paul Henry describe the conflict at the heart of Ireland 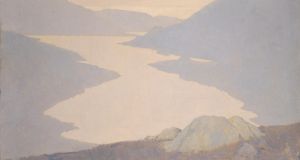 Misty mountains, gleaming white gable ends under golden thatch, and evocative pools of milky water: who could sum up the west of Ireland like Paul Henry? But wait, what about the rugged, ragged landscapes, angry seas and wild horses of Jack B Yeats? This difference of perspective is at the heart of the Hunt Museum’s excellent exhibition, in which Henry and Yeats, who were born just five years apart, worked together setting up the Society of Dublin Painters in 1920, and died within a year of one another, are not so much presented in opposition, but gently contrasted.

It’s a relatively compact show, given the extent of each artist’s output, and there are some obvious gaps. While it’s wonderful to see the Yeats paintings shine at the newly refurbished National Gallery, some of their holdings would have made useful additions to this landmark exhibition. Similarly, Yeats’s A Race in Hy Brazil (1937) is currently hanging in the Crawford’s What’s the Story? exhibition, so for maximum mythological kicks, instead we have In Tír na n-óg (1936), borrowed from its usual haunt at the K Club. In fact, there’s a good variety of diverse loan sources, also bringing less familiar works to light.

What’s clear from the works on display is that, just as much as his brother William, Jack was caught on that knife edge between gritty realism and the fantasies of a world beyond the sunrise / water / whatever you’re having yourself, in which humans, freed from the chains of the everyday, disport themselves among faerie folk. Put like that, it seems like trite escapism, and yet isn’t there an element of that in all of us? Don’t we all share the mundane trials of simply being human, set against a drive to think, be and hope for more? You can see it in spades in From Portacloy to Rathlin O’Berine (1932). At first glance, it looks as if a man is embracing his horse on the North Western shore. But isn’t he rather attempting to hold on to a wild thing, to hang on tight before it shakes him off and gallops all that spirit out of reach?

With The Irish Sea (1932) and An Atlantic Drive (1944), we have a pair of works in which a figure looks from darkness into light. While the former could be interpreted as another plight-of-the-emigrant painting, it’s pleasing ambiguities give it a little more to imaginatively work with. The orientation is just one of the conundrums. The figure has his back to us, but is he looking into a bright future, or taking one last look at happiness left behind? I’m inclined to find a clue in An Atlantic Drive, as one of the joys of seeing a body of work by a single artist together – especially works not so frequently seen as to have become mistaken for open books – is that conversations between them can create small enlightenments. In this painting, the people are being taken by horse-drawn buggy out of the picture to the bottom left. For the most part they’re painted in dark earth browns, but the girl who is gazing out to sea wears a dress of the same ocean blue. It’s that yearning for other, for the just out of reach again.

It’s tempting to see Henry as more of a realist, but of course he wasn’t. After his early years searching for a style, which this exhibition demonstrates very well – View of Cliffs (1912-15) is pure Post-Impressionist Pierre Bonnard – it’s well known that his spiritual home of Achill worked on his imagination, so that over time the peasant figures in paintings such as The Potato Digger (1912-15), and Old Woman (1914-16) not so much disappear, but evaporate, dissolving into that misty light that characterises his unpeopled – and therefore unspoiled? – landscapes. These so captured the Ireland of those imaginations that didn’t have to live the reality, that they were taken up for tourist posters by the London Midland and Scottish Railway Company, as well as being used to illustrate Saorstát éireann – the 1932 government-produced guide to the new Irish State.

Looked at this way, it’s clear that Henry is doing some pretty thorough-going mythologizing of his own. At a fascinating symposium, held as part of the exhibition, former Crawford Director, Peter Murray, pointed out that Henry had worked for the Congested Districts Board on Achill during 1917 and 1918, and so would have come into considerable contact with abject poverty, as well as with some of the less laudable aspects of the Board’s operations. In this telling, Henry’s pure landscapes become a panacea for the occupants of Dublin drawing rooms, and while later works, such as Village by the Marsh (1934-35), show he lost none of his facility, it’s clear he’s not as passionate about his project as he was when he was struggling to express the shocking grandeur and stricken poverties of a landscape that had grabbed him by the throat.

You can see this most clearly in his earlier work Mountain Cottage (1918-19), a dark and lowering canvas with broken thatch and stunted windblown trees, skeletal against a black mountain. Perhaps it’s unsurprising that both Yeats and Henry turned to mythologizing their worlds; Ireland as an emerging nation was engaged in doing exactly the same and, in this, it’s not unique. All nations use foundation myths as a way of binding their peoples together, though in tragic fact, it’s these myths that most frequently cause people to seek to tear one another apart.

In Yeats’s 1924 The Rifle Range, a man leans towards what, to my eye, is a woman. The pose is conspiratorial, though she appears less engaged in the encounter than he. Oddly the notes in the exhibition catalogue describe this scene as showing “two ‘cowboys’”, and as drawing on Yeats’ love of Wild West Shows, which “perhaps appealed to Yeats’s strong sense of the ridiculous”. While the painting does indeed show a entertainment shooting range, the military dress of the female figure speaks to me of a couple such as Maud Gonne and brother William, and in this immediately post Civil War time, of how and where one might channel a taste for violence. Another, darker reading suggests that such a duo may have been playacting all along.

Yeats and Henry, while revered in Ireland, don’t carry a similarly strong international reputation. Yes, there are fans, but while it may be sacrilege to say it here, they’re not considered first rate on the world stage. Both are inconsistent, and yet are capable of sublime moments, as the pair of paintings at the heart of this exhibition shows: Dawn, Killary Harbour (1921), and From Portacloy to Rathlin O’Berine hang side by side; and yet perhaps their reputations in Ireland rest on their separate abilities to capture the contradictions at the heart of the human psyche that informed the emerging Irish State: contradictions we carry the fruits of to this day.