Got the blues? Plunge right in to this week’s art highlights 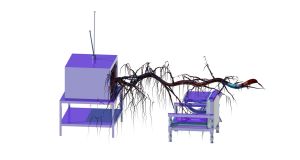 If you’re one of those people more comfortable with artists who stick to one thing, Vera Klute is here to show you different. Brilliant portraits capture the sitters, justifiably winning awards, while videos, drawings and sculptures prove Klute can also get under the skin to the strange goings-on of the world – and the mind. Plunge right in – it’s well worth it. Meanwhile, in the RHA’s foyer space, Janet Mullarney gives you glimpses into her own brilliance with small sculptures, sketchbooks and ink drawings. But oh! I wish they’d label the works, rather than leave you scurrying back and forth to the wallchart . . .

This is the first solo show by Bassam Al-Sabah, and comes at the end of a year-long RHA Graduate Studio Award. Drawing on his childhood in Baghdad, Al-Sabah looks at life through the lens of being shifted from one culture to another, finding the reality of your own life turned into a matter of politics and debate, with a measure of how violence is broadcasted and packaged – sometimes for entertainment – thrown in. Bright colours and pop culture references mash up with the serious themes. A fascinating artist – watch his work develop.

Got the blues? Or just fancy a dose of them? Well, get to Belfast, as Colin Darke has curated the third in a series of exhibitions through the prism of colour. Blue is culturally cold, sad, and also Conservative. Picasso had a Blue Period, and Cézanne got into it too. Some argue that particular depressive phases heighten your perception of this colour. Dive in to some contemporary takes by Colm Clarke, Angela Hackett, Catherine McLaughlin, Grace McMurray and David Turner.

We do it all time. It seems so inconsequential and yet, when it fails, we’re finished. One of Ireland’s leading and pioneering performance artists, Nigel Rolfe, turns his attention to something as simple-seeming as breathing. In the gallery, this transpires through photographs, performance, film and “drawings” made by blowing pigments across paper – which could have been one of those art things that cause you to sigh, but in the hands (or rather breath) of an artist like this, are a source of wonder instead.

We’re so used to those dusty portraits of the great and the good hanging on institutional walls, that frequently we ignore them entirely. This show, selected by Mick O’Dea, is something different. Inspired by the sight a portrait at a friend’s house, it’s a warm look in to the lives of the friends, families and lovers of 25 artists including Una Sealy, James Hanley, Vera Klute, Brian Bourke, Carey Clarke, Molly Judd and Gary Coyle. Part of the Ranelagh Arts Festival, it’s both personal and universal, and might even inspire you to commission one of your own.