The American conductor died on Saturday, hours before he was due to conduct the RTÉ Concert Orchestra in Dublin 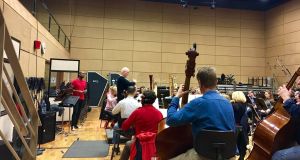 The sudden death of American conductor David Heusel was announced on Saturday, less than an hour before he was due to conduct the RTÉ Concert Orchestra in an evening of operatic favourites. The concert, at the National Concert Hall, was cancelled as a mark of respect.

Heusel’s career took him to opera houses and concert halls worldwide, but he had a strong association with Dublin, which began in 1994 when he conducted Hansel and Gretel for Opera Ireland with the RTÉ CO. He went on to conduct six more productions until 2002, many with then artistic director Dieter Kaegi.

“My collaborations with David are connected with some of the most wonderful artistic memories of my years in Dublin,” says Kaegi, now director of Theater Orchester Biel Solothurn in Switzerland. “To work with him was pure pleasure. His love for singers and musicians, his dedication to the art form of opera, his interest for staging and stage matters in general, his sense for dramatic moments, his sense of humour, his immense general knowledge and his sensitivity for languages made David unique and one of the best opera conductors I have worked with.”

From 2013 to 2015, he conducted two operas and two gala concerts with Lyric Opera Productions. Artistic director Vivian Coates recalls a friend and dream collaborator: “A man is remembered for his professionalism, friendship, sensitivity, grace and above all, humility. David had all of these qualities in abundance,” he says. “He had a smile that wove happiness through every conversation and brought his own wicked humour to a situation. A shifting in the chair, the folded arms, a glimpse of an eye in the rehearsal room and that smile would instantly tell you that all was well.”

He excelled in the opera house: a multi-linguist, his clear beat and unflappable temperament harnessed orchestra, soloists, chorus and dancers together to produce performances distinguished by vivacity, grace and natural phrasing. In the concert hall, he had a deep knowledge of orchestral repertoire, extending beyond the classics. With the RTÉ CO he conducted relative rarities, such as Kurt Weill’s Violin Concerto (with Michael d’Arcy) and Samuel Barber’s Knoxville (with Regina Nathan).

“David was a true artist with a vast knowledge of musical repertoire and the arts in general,” says Gareth Hudson, interim general manager with the RTÉ CO, noting the special bond between Heusel and the orchestra. “I am thankful that David spent his last few days amongst the very musicians that not only occupied a significant part of his career, but a very warm place in his heart.”

“He was loved and respected by each and everyone that had the pleasure to work with him,” says Kaegi. “That’s a rare thing in the sometimes envious and anonymous music world.”

50 scary films to watch at Halloween
10

Nealo: All the Leaves Are Falling review – Indignation and disillusionment never sounded so sweet
Real news has value SUBSCRIBE