Our Limerick crime comic: ‘I wanted to do something Irish’ 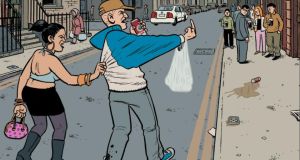 You don’t often see the streets of 1990s Limerick in a publication from Image Comics, publisher of Spawn and The Walking Dead, but they’re everywhere in Savage Town, which is “one of those graphic novel yokes”, as its title page proclaims.

The book is created by Philip Barrett and Declan Shalvey, with colouring by Jordie Bellaire. Barrett, the artist, is a stalwart of the Irish indie-comics scene. Shalvey, the writer, is a comic-book superstar, well-known as a penciller on high-profile American titles such as Deadpool, Moon Knight and The Punisher.

Who knows what Shalvey’s American fans will make of small-time Limerick criminals who say things like, “Now better get you home so I can head away and tear de lad off meself”? The beautifully rendered, blackly funny Savage Town may need to come with a glossary.

This is a kind of coming-of-age moment for Irish comics. When Barrett and Shalvey were younger in the 1980s and 1990s, Ireland was a comic-book desert. “You could get the English comics in Donegal but not much else,” says Barrett. “Battle and Eagle and 2000AD ... I can remember vividly the first 2000AD I read. Finding that in a newsagents, it fried my brain.”

Shalvey says: “I was too goody-two-shoes to read 2000AD. I grew up with Batman and X-Men cartoons and I used to read Asterix in the local library and Tin Tin. And on the news-stands you’d get Scrooge McDuck.”

In the noughties, a small local comic book scene emerged in Ireland. Aspiring artists would meet at get-togethers and conventions, and in the process Barrett and Shalvey became friends.

“Did you ever do 24 Hour Comics?” Shalvey asks Barrett, referring to events run at the Central Hotel at which artists would get together and create comics on the spot.

“Aye, I did once,” says Barrett. “But I was from Donegal. I didn’t know anything that was going on.”

“I barely knew how to work the internet,” says Shalvey.

“I think in the last few years there’s been an explosion of younger people doing self-published stuff,” says Barrett. “The Comics Lab, Sarah Bowie and Debbie Jenkinson, had been running, nurturing a lot of people into the more self-published side of things.”

There are a lot of more conventions and events for fans and artists now, says Shalvey. “When comic fans say ‘Ah, I don’t think I’ll go to that’, it pisses me off so much because there used to be nothing. ‘You bastards! We had to go to England for that stuff.’ ”

Comic fans like to talk about comics, so our conversation keeps getting sidetracked into the work of comic creators such as Alex Toth, Garth Ennis, Bob Byrne, David Mazzuchelli, Rob Curley, Jim Lee, Brian K Vaughan and Mad Max: Fury Road artist and writer Brendan McCarthy. For people who are not comic nerds, this is a pretty eclectic list.

They also talk, for a while, and a little ambivalently, about the increasing importance of comics to pop culture thanks to superhero movies and TV shows. “Now when I tell strangers I draw Deadpool or Punisher, they know what I’m talking about,” says Shalvey.

Shalvey always intended to make a career for himself beyond the Irish self-publishing scene. His first American work was for a 28 Days Later spin-off. “It didn’t pay great but it got me seen in America by American editors. To be seen to be making comics is important ... Once I got to work on Marvel, I let everyone know that I’m the nice Irish fella.”

Nowadays Shalvey is arguably the most successful Irish artist in comics and he’s increasingly becoming known as a writer. He has drawn and written a lot for Marvel (Deadpool vs Old Man Logan, which he wrote, is coming soon), but he has also been working with his girlfriend, the award-winning colourist Jordie Bellaire, and comic-book auteur Warren Ellis on the ongoing cult sci-fi comic Injection, for Image. Image famously gives its creators complete artistic control, and working there gave him a yen to do more independent work. That said, he’s a bit surprised they went for a comic filled with Limerick slang. “I wanted to do something that was Irish and felt Irish.”

In many ways, Barrett’s work couldn’t be more different from Shalvey’s, taking its cues from alternative cartoonists such as the Hernandez Brothers and Daniel Clowes. His early self-publishing history involves wrestling with photocopiers and staplers in Reads of Nassau Street. He is, in short, a cult hero of Irish comic books. He’s quieter than Shalvey. “I’m sorry if I’m dominating this,” says Shalvey at one point.

“Sure I agree with everything you’re saying,” says Barrett.

Shalvey, for his part, wants Barrett to be better-known. “Myself and [fellow Irish artist] Bob Byrne used always say Phil was the greatest artist in the country,” says Shalvey. “As a fan, I really wanted to get a book Phil had drawn, and he hadn’t done a full book. So that was always at the back of my head.”

Where did the idea for Savage Town come from? “I went to art college in Limerick and I always wanted to do a crime book set in Limerick,” says Shalvey. “Irish crime stories are always in Dublin or about the ’Ra. I also remember watching The Snapper years ago and thinking ‘I wish I could read a comic like this’. I grew up in an estate like that in Clare and there’s nothing like that in comics. Those two different ideas merged together at some stage [into Savage Town]. I wanted to write it but I knew I couldn’t draw it because I’ve agreed to do seven different things … I instantly thought of Phil, because then I’d get a Philip Barrett book out of it.”

What do Americans make of it? “I haven’t got too much feedback yet,” says Shalvey. “I worried the dialogue would be a barrier … but so far it’s all been positive. I talked to one reviewer who is an Asian-American doctor in San Francisco and he seemed to get it.”

How do you think it will go down in Limerick? “Well my friends there like it,” he says. “But I was invited to an arts event in Limerick. [I] sent them the first chapter and then they uninvited me. They said it was too close to home.”

“But nothing happens in the first chapter except a gun is pulled at the end!” says Barrett. “It’s just lads drinking and driving around in a car.”

“I think there might be a sort of middle-class resistance to it,” says Shalvey. “I did an interview with a radio station and they were kind of going, ‘Don’t you think it’s a bit bad to name it Savage Town?’ But ‘savage’, you know, there are two meanings to that.” He demonstrates. “‘We had a savage time.’”

Are they worried about a Father Ted-style backlash? “I’m expecting it,” says Shalvey. “But if anyone actually reads it, [they’ll see] that there’s stuff I love about Ireland in there and stuff I hate about Ireland. I wanted to treat Limerick the way The Wire treats Baltimore. Setting it outside Dublin reflects that weird gap where the countryside meets the city ... And I wanted to make sure we weren’t demonising anyone or glorifying anyone … Sometimes the way we write about people in the Irish press – as monsters or fiends, the sneering tone, all these dehumanising taglines – I think that attitude lets us all off the hook. That made me uncomfortable so I wanted them to be very human characters, even though they might do all these horrible things.”

“That went down to the level of designing the characters and the way we were depicting them visually,” says Barrett, “No one is completely bad and no one is totally good.”

How did Barrett go about drawing Limerick of the 1990s? “I used newspaper archives,” he says. “One that was particularly difficult to recreate was Thomond Park … And it’s kind of shocking when you see how places have been left for so long. It’s kind of frightening.”

Will there be a sequel to Savage Town? “It’s self-contained but there are so many threads to pick up,” says Shalvey. “Sometimes plotlines grew because of characters Phil drew. He did some great faces and I just thought ‘I want to see more of them’. I made it hard for him, too. I didn’t get him scripts until he needed them. I was getting it done just before he ran out of pages.”

As a fellow artist did Shalvey have advice for Barrett? “My stuff is cartoony,” says Bartlett. “So there was a struggle getting the balance right. Declan would say ‘the heads and the hands are a bit big on those guys.’” He laughs. “I read somewhere once that the difference between indie stuff and stuff that’s more mainstream in comics, is like the difference between theatre and cinema. I started to doing more widescreen stuff as I went along.”

What do readers get from comics they don’t get in any other medium? “There are very little filters between you and the artist,” says Barrett. “With film a lot of people are chipping in their bits but with a comic you’re getting it directly.”

“[With comics] the reader is adding bits,” says Shalvey. “Someone once said that the comic really happens in the space between the panels. You’re building a world as you read.”