Bruegel: one of the most evocative representations of winter

Art in focus: you’ll have to make your way to Vienna to view Hunters in the Snow 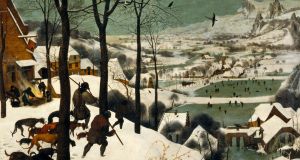 Hunters in the Snow is one of the most brilliant and evocative representations of winter in Western art. It was painted by Pieter Bruegel the Elder in 1565 and is probably his most famous painting.

In a superb, elegantly linear composition, to the left we see a trio of hunters trudging homewards through the snow accompanied by their dogs who seem equally downcast. Bare trees climb into the cold, ominous sky around them. Their frozen village is spread out below. People skate, carefree, on the ponds.

To the left of the hunters, several individuals, perhaps innkeepers, prepare an open fire to singe a pig – apparently, notes Cäcilia Bischoff, a signifier of December from medieval times. Only one of the weary hunters has anything to show from the hunt: a single fox hanging from the pole resting on his shoulder. The scene might be bleak but it is nonetheless life-affirming and beautiful with a sense of communality, endurance and an appreciation of all that is good.

Painted with oil on panel, physically it is not untypical of its time. It was the last in a series of six paintings (one now lost) recording the seasons that Antwerp banker Niclaes Jongelinck commissioned from Bruegel. His technique is breath-taking. The palette, balancing cold snow whites, grey-greens, close-to-black browns and the peripheral but luminous warmth of the flames, is superb. All this, and the stark, dynamic, graphic nature of the composition make it a timeless work.

If you don’t happen to be there at the moment, you will have to get to Vienna and make your way to the Kunsthistorisches Museum. This painting alone is worth the effort, but then, the museum also houses the finest collection of his paintings in the world. Its collection is one of the very best in Europe, and you will in all likelihood come face to face with numerous paintings that stop you in your tracks.

It is a masterpiece. Then again, that’s not untypical for Bruegel who was quite an extraordinary artist. A successor to Hieronymus Bosch, he was more firmly grounded in a human and humanist world (arguably by virtue of the Reformation). He was affiliated to a group of thinkers who argued for moderation and co-existence in response to the fierce religious conflicts of the time. In his work he is clearly an acute and sympathetic observer of human behaviour and a chronicler of communal life.

While his paintings are rich in generic incident, together with a vivid feeling for individual humanity, they also display a breadth of vision and a technical daring that sets them apart (witness the dramatic diagonal emphasis of Hunters). Like other Flemish artists, Bruegel travelled to Italy, but he was apparently most impressed by the Alps en route. They are in the background of Hunters, craggy vistas transposed to the more restrained landscape of his home country.

The Year Without Summer: a vision of climate upheaval seen through the past
6