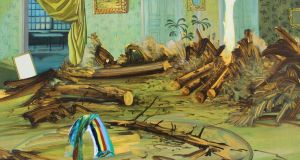 At the conclusion of John Fuller’s novella Flying to Nowhere, set in a remote island monastery, there is a startling image: the wood, which has been felled, seasoned, cut and carpentered to provide the essence of a comfortable interior, a haven for prayer, contemplation and scholarship, comes back to life, swelling and sprouting, rebelling against the straight lines imposed on it, breaking through the boundary between culture and nature, tearing asunder the dream of an orderly world view, with God in his heaven.

Fuller’s image comes to mind in relation to David Eager Maher’s fine exhibition, Locus at the Oliver Sears Gallery, consisting of just eight modestly scaled paintings. In the paintings it is as if the orderly, often classical interiors are invaded by vegetation, usually trees, sometimes unruly copses, sometimes individual plants. It is only as if, though, because the status of the spaces we see is in fact ambiguous, either or both inside and out depending on how you choose to interpret them.  When Eager Maher completed his MFA at NCAD in 2011, the essential elements his work as it is now were in place, but in a less resolved, less cogent form. Drawing, still essential, was much more dominant. His own facility, and the ease of drawing as a process tended to lead to greater, perhaps fussy elaboration. Classical, rather grand interiors, apparently based on art-historical models rather than architectural-historical models, were even then in evidence, as was the eruption of nature into these havens of civilised order.

One major development is that Eager Maher is now much more a painter than he was. Not that he couldn’t use paint – he certainly could – but now he is at ease with the medium, and able to use its characteristics in shaping his work rather than merely fleshing out an image. Witness especially Annexe, Spool and Thicket, all of which use the quality of brush strokes, the translucency of glazes, and selective colour to great effect. Add Fruit Tree, in which a resplendent interior is littered with felled trees, and you have the four best works in a consistently impressive show, a terrific quartet.

From the beginning a retrospective quality in Eager Maher’s work has attracted comment. Somewhere along the way the description “a 19th-century explorer living in 21st-century Wicklow” became attached to him. Whether it was his or someone else’s phrase is not clear, but it’s accurate enough, though not in the empire-building sense of the term. Does the work express a nostalgia for an earlier era? Not quite, no. Tie it to history and there is a built-in critique of imperialism, with exotic jungles reclaiming the outposts of European colonialism.

More than a critique is embodied in the paintings. There were many kinds of explorers active at the time. The Victorian era, especially the latter half of the 19th century into the Edwardian early 20th century, saw seismic shifts in almost every area: science, politics, religion and the arts. As old ideas became unmoored, everything was up for grabs. Ruskin bemoaned the geologists tapping away at the biblical account of earth’s history; Darwin recast humans as a product of evolution; Einstein confounded our understanding of time and space; Marx had planted the seeds of political and economic upheaval; mystical and occult ideas flourished.

Despite the recreational trappings evident in some of Eager Maher’s paintings (a deckchair, a beach umbrella), they suggest not serenity and ease but a state of flux. The world won’t stay still. Presumed meanings evaporate, certainties collapse. Civilisation’s apparent achievements are tentative and evanescent. Orderly pattern is symbolically shredded in Awning, as tropical vegetation bursts through the geometry of the tiled floor and the fabric shade.

Catherine Hammond, whose gallery in Glengariff and latterly in Skibbereen has a record of strong, carefully considered exhibitions extending over the last 14 years, has announced that she will close the doors for good next Saturday, December 23, when Oonagh Hurley’s show, Timelines, concludes. Hammond is not going to disappear from the scene and intends to continue working in the visual arts “as a curator, consultant, project manager, grant writer, and teacher”. And she plans to engage in several pop-up exhibitions in the coming year, as an alternative to maintaining a full-time exhibition space.

Similarly, in Dublin, changes are afoot in Francis Street, where Mark St John Ellis, a curator of immense experience and flair, has bowed out of his basement space, nag. Upstairs in the same building, the Cross Gallery is also closing its doors. Although, like Hammond, Nicholas Gore-Grimes is giving up his full-time exhibition space, he too hopes to create offsite exhibitions, and he will continue to be involved in the area of 20th-century design.