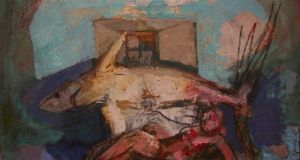 Here and Now – Diarmuid Delargy – Ballina Arts Centre, Barrett Street, Ballina, Co Mayo. Until August 26th. ballinaartscentre.com – Diarmuid Delargy makes art of things that concern him. Back in 1987 that, naturally for the Belfast-born painter, included the Troubles, as seen in the landmark Douglas Hyde Gallery show, Directions Out. Nevertheless, the artist says, “there was no conscious effort on my part to make ‘political art’ [but] it would be fair to say that my work did reflect many of the concerns of the time,” adding that “much of the work is allegorical”. The concerns have shifted to include the omnipresent environmental catastrophe under which we live today, and the relentless consumption of contemporary society. The allegories are still there, and the paintings, influenced by Delargy’s interest in printmaking (his prints are wonderful), are rich, layered and passionate. The landscape is a shaping force too: from his Sligo home to the sunnier colours of Crete, where the artist has spent time.

Without the Words Garter Lane Arts Centre, O’Connell Street, Waterford. Until August 26th, garterlane.ie – Oh, we know the cliche that a picture tells a thousand words; but even better than that, a picture can set off wild imaginings that take you way beyond the realm of mere letters in the alphabet. If you haven’t yet caught this touring exhibition, now’s your chance. See work by more than 30 illustrators including Steve Simpson, and current Laureate na nÓg, PJ Lynch. It’s inspired by a line from Emily Dickinson, who is rather good on hope: “…the thing with feathers – /That perches in the soul /And sings the tune without the words - /And never stops – at all…”. For the perfect visual illustration of that, April’s Garden by Dermot Flynn might make you want to weep with joy at the impossibility of it all.

Somewhere in the Future - Siobhán McDonald Catherine Hammond Gallery, Bridge Street, Skibbereen, Co Cork. Until August 31st. hammondgallery.com - You could be forgiven for thinking that the unspoiled white wastes of the Arctic are actually crawling with artists. Roni Horn made a celebrated series of photographs there in the 1990s, and ships crammed with artists and writers ply the icy waters. Irish artists Siobhán McDonald, Alva Gallagher and Blaise Drummond have all made work inspired by this extraordinary place. McDonald and Gallagher are currently in a joint exhibition: McDonald’s paintings getting, beautifully, to allusive grips with climate change; while Gallagher’s glass sculptures catch the movement of water, frozen in light. Earlier this year McDonald was named the UN Climate Action Programme’s artist of the week, and her work has also been shown at the European Space Agency in the Netherlands.

Captured in Time - The Arthur Collection Ennistymon Courthouse Gallery, Parliament Street, Ennistymon, Co Clare. Until August 23rd. thecourthousegallery.com - Mindful of the Chinese curse “may you live in interesting times”, it’s easy to think that our current age of anxiety trumps (sorry) past eras. Take a closer look at the recent past, however, to see just how wrong that view proves to be. The Arthur Photographers, headed by Joseph Arthur, began their photography business in Ennistymon in the 1860s. Now, thanks to research by the Old Ennistymon Historical Society, together with Arthur’s descendants, a collection of key images has been amassed for exhibition. See the Kilshanny Boycott (c. 1896), the Black and Tans’ burning of Ennistymon and Lahinch (1920), alongside lighter moments, such as the trundling of seemingly endless horse-drawn circus wagons, as Fossets pulled out of town (1939). Fascinating.

Written in Water, Shone in Stone, Lost in Light - Richard Proffitt Kevin Kavanagh Gallery, Chancery Lane, Dublin 8. Until September 9th. kevinkavanagh.ie - Wander into a Richard Proffitt exhibition or installation and you could be forgiven for thinking you’ve either walked onto a dystopian movie set (from Mad Max or the uncomfortable denouement of the first series of True Detective, perhaps), or stumbled into the temple of some strange sect. Proffitt is fascinated by how things become emblems of the Other, how histories and myths come to be wrapped around certain things: bells, beads, masks, even twisted wire attracts a satisfyingly creepy significance in his set-ups. The Liverpool-born, now Dublin-based artist mashes culture, belief, ceremony and National Enquirer-style media (yes, aliens are among us) to draw us into worlds that it could be easy to dismiss, and yet consider this: they have endured for millennia.