We should highlight the simpler, modest buildings of eco-builders, community activists and Men’s Sheds participants 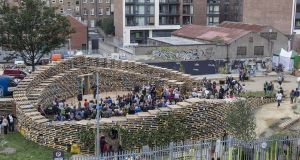 Enabling environment: Granby Park on Lower Dominick St, Dublin, was transformed from a vacant site into a place of creativity for everyone

Every industry has its shindig: a glitzy award ceremony, sales fair or seminar. For architects, the Venice International Architecture Bienniale is the most prestigious; a chance to strut one’s stuff with the best in the field. Since 2000 Ireland has funded a national stall (grandiosely called a “pavilion”) where we get to portray something about ourselves to the wider world. All too often, though, it fails to inspire; getting caught up in intellectual abstractions, stylistic irrelevancies or the glorification of architectural icons.

This time around things could be different: the curators, Yvonne Farrell and Shelley McNamara of Grafton Architects, are seeking proposals around the theme of “FreeSpace”, that offer architectural solutions “for the wellbeing and dignity of each citizen of this fragile planet”.

Instead of trying to strut and stylise with the best of them in our black-framed Liebeskind glasses and hand-tailored shirts, we could have the courage in 2018 to offer a more humble submission, highlighting the simpler, modest buildings of eco-builders, community activists and Men’s Sheds participants. They may not be as familiar with latest CAD design software or industry jargon, but the dwellings they build can be nourishing and nurturing, responding to an inner desire to create homely cocoons or welcoming public spaces at an affordable price.

I’m talking about the likes of the Upstart collective who created Granby Park, a temporary public space on a vacant site in central Dublin in August 2013, or the amateur home-builders who manage to construct “natural” homes out of cob, hemp and straw-bale, or the single mothers creating well-insulated timber homes from salvaged materials for less than the cost of an architect’s swanky German car.

There are so many examples: the rare few county engineers who insist on building quality public seating; the lone-wolf town planners who actively believe in the potential of cycling; and the many genuinely soulful architects who don’t chase high-profile commissions or capitulate to a client’s demand for maximum return per square metre.

We should aspire in 2018 to the aims of the new “Friendly and Inclusive Spaces” awards of the International Union of Architects (UIA). Ireland won two awards this year: McGarry Ní Éanaigh Architects for a secondary school in Donegal, and Seán Harrington Architects for Malahide Parish Centre.

The co-director of the programme in Ireland, Fionnuala Rogerson, said that the winners reflected their vision that “good architecture contributes to the creation of ‘enabling’ environments which are suitable for people of all ages, abilities and cultures to use and enjoy”.

In 2006 Ireland did attempt to showcase a radical vision at the Biennale, with an exhibition titled SubUrban to SuperRural, featuring Quixotic visions for rural housing in Ireland. It was prophetic in its insistence that something was rotten at the heart of Irish planning practises, especially considering the economic crash was just about to hit, with the subsequent evisceration of so many architectural practices.

Heneghan Peng proposed a high-speed rail bridge from Rosslare to Fishguard, connecting Dublin with London and Paris. Dominic Stevens proposed a river-borne market that would bring the buzz of urban life to 250,000 people living in floating houses along the Shannon-Erne Waterway. Boyd Cody Architects proposed self-sufficient dwelling areas for up to 80 people in storehouses suspended over the vast wetlands of Bord na Móna’s Boora complex.

MacGabhann Architects investigated sinkable seaside holiday villages in Donegal that are only visible when occupied, disappearing into the ground during the long months when nobody’s at home. Henchion+Reuter Architects suggested focusing all new housing along corridors between the big cities to create the critical mass needed to support Danish-style high-speed trains, cutting the travel time between Dublin and Sligo to 48 minutes, for example – while also improving access to Ireland’s Atlantic tourist zones. DePaor Architects argued for a new form of rural housing inspired by the medieval towerhouse that would house four families on different levels.

While all were a bit far-fetched, they had vision and were genuinely stimulating. The hope is that in 2018 we can present Irish architectural solutions that are stimulating, but practical. Less abstraction of impenetrable CAD designs and prim graphics, and more buildings and public spaces that make us feel human, and that are accessible physically, emotionally and spiritually.

Mary Berry’s Ireland vist: here’s what she did and what she cooked

Hong Khaou: ‘Vietnam is always seen as a victim. I wanted to show it as it is’
7

Oliver Jeffers: Before my son, I wrote my children’s books for myself
10