Here's how to make a city graffiti-proof 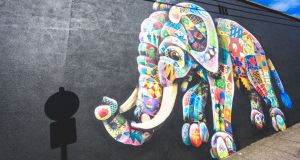 Martin Duffy is shaking his head from side to side as he watches a young man in a hoodie spray-paint the wall of the Distillery building opposite his Waterford city apartment block.

He crosses the street to shout something up at the man, who is struggling to hear him over the noise of cherry picker he is using to hoist himself to the top of the building which overlooks the Suir. “I said, ‘Would you like a cup of coffee?’” Duffy yells.

The man in the hoodie, an American who prefers to be known as Arcy, is not just any kid with a can of spray paint. He’s an internationally recognised artist, who is participating in the 2017 Waterford Walls International Street Art Festival.

“This is going to be our view. It’ll be like having a new piece hanging on the wall,” says Duffy of Arcy’s mural of a rugged fisherman, which is beginning to take shape opposite. It is one of 40 works of art by 40 artists that will be painted in the city during Waterford Walls – most of them during three days between August 17th and 20th.

“I’ll tell you one thing: this festival is absolutely fantastic for Waterford,” adds Duffy, who says he doesn’t know much about art, “but I know what I like. And this is terrific.”

Joe Caslin’s vast, iconic mural on the front of the soon-to-be refurbished Ard Rí hotel, which was created as part of the 2016 Waterford Walls festival in aid of Pieta House and A Lust for Life, and overlooks the city, is “the loveliest bit of art I’ve ever seen”, Duffy says.

Waterford Walls director and project manager Edel Tobin, a teacher by training, is watching the exchange. “This is what it’s all about,” she says of the festival she founded in 2015. Then, there were just 24 artists taking part.

“In the beginning the challenge was about changing people’s perception of graffiti and street art as vandalism. Street art has been used in so many places to regenerate and enliven cities. I always saw the potential of it once people actually saw the art. It’s not just about the beauty of the work, but it’s about the way the public engages with it.”

Waterford Walls is unique internationally because of its scale and the buy-in from the whole city, Arcy says. “I do a nationwide mural tour in the US and I do a lot of work internationally, but to have something like this come along, it’s like a gem for me. And I am Irish on one side, but I’ve never been to Ireland, so I jumped at the chance to come here.”

The other thing that appealed was, he says, that the artists participating in Waterford Walls are given complete creative control over what they want to do. He chose a fisherman to “play off the location beside the river” and the city’s maritime history.

“In theory, something like Waterford Walls could happen anywhere. There are similar festivals in Derry and Belfast,” says Dublin artist Jess Tobin aka Novice. “But a few things make this one a bit special. Waterford lends itself well to something like this because of the creative energy that’s in the city. Unfortunately, too, there are a lot of empty and derelict buildings there, which is good for street art. But what really makes this festival different is the dedication and professionalism of the team behind it. The festival brings a lot to Waterford, but Waterford has a lot to bring to the festival.”

Other headline artists participating this year include Irish artist James Earley; Fintan Magee from Australia, who is one of the biggest names internationally in street art; Kelsey Montague from the US; Lula Goce from Spain; and Sonny from the UK.

“The artists love the opportunity to come and work alongside one another,” says Edel Tobin. “We can only afford to pay them a small fee as a token of our respect and gratitude, but they come anyway. We get submissions all year round from artists wanting to be part of it.”

There will be 15 artworks in the O’Connell Street area, which has been earmarked to become the city’s creative quarter, and 14 in New Street Garden. And for the first time, there will be three murals on walls on the newly opened Waterford Greenway, commissioned by Waterford City and County Council. The remainder will be scattered around the city.

Each artwork will have a QR code that visitors can scan with their phone to bring up information about the individual piece and the artist. The festival, which is free to all, also features three separate art trails; music; art, hip hop dance and yoga workshops; and street food.

“Waterford has such a long tradition of the arts. The idea behind founding this festival was to tap into that appetite for the arts that has always been here, and breathe new life into parts of the city that had been neglected,” Edel Tobin says.

This will be Jess Tobin’s second Waterford Walls. She is planning to paint two faces on a large wall alongside the Waterford Walls headquarters in her trademark bright colours.

“Part of the appeal is meeting the other artists. You really get inspired by them, and bolstered by being around them and working alongside them. As we were painting people were stopping and chatting to us, thanking us for what we were doing – so there’s a really good vibe there.”

The city’s business owners have embraced the festival and in the three years since Waterford Walls launched, at least half of the property owners who offered wall space to be used in the festival have chosen to preserve rather than paint over the artworks. Are Edel Tobin and curator Louise Flynn worried about running out of walls? “No, because next year, we’re looking at extending it out to include street furniture, lighting, electricity boxes, and that kind of thing. Anything that you’d think of as a potential eyesore,” Tobin says.

One of the positives of the festival is the pride of place it fosters across all sectors of society. “What’s remarkable is that no wall painted during the festival has ever been tagged or vandalised,” she says.

The festival is entirely volunteer-led and relies on contributions from local businesses. As it has grown, so too has the need for funding: this year’s budget was €63,000 and by 2018, Tobin estimates that €150,000 will be needed to make Waterford Walls happen. “This year the Arts Council has come on board for the first time, and we get some funding from Waterford City and County Council. But mainly we raise money by knocking on doors. It’s a tough graft.”

Lisa Fitzgerald, local business owner and business manager of Waterford Walls, says the festival “puts Waterford on the map. The more business owners in the city can support these sort of initiatives and local festivals, the more we’ll see the benefits right throughout the year, and not just in the three or four days of the festival. It’s not a sprint, it’s a marathon. It’s about getting Waterford’s cultural and artistic heritage recognised on a global stage.”

Waterford Walls runs from August 17th to 20th in locations around the city. See waterfordwalls.ie

‘Conor McGregor is an inspiration. There’s a severe vulnerability to him’
9