The strange and intangible attraction of colour 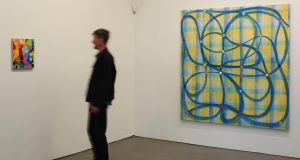 Colours pop on the walls of the Limerick City Gallery, as Ronnie Hughes takes us on a dance through (almost) everything you could do with line and paint without getting representational. There are op art extravaganzas that make your eyes ache; bursts of geometric shapes that seem to warp the flat surfaces of the paper and canvas into pinnacles and troughs; and grids of line and colour to take your senses for a walk through a series of endless mazes.

Sligo-based Hughes, whose much earlier work focused on recognisable forms and figures, has in more recent years pulled up the anchors to all that, to explore the limits of seeing, freed from the shaping nature of stuff we think we already know. Put it this way: if poetry, at least in part, uses allusion and metaphor to attempt to get beyond the confines of words and give us glimpses into the infinity of feeling, emotion and matter outside of them, then abstract art does something similar with line, colour and the spaces in between.

“At one time I used to make work that used recognisable images to try to eke out ideas or expressions about particular thematic issues,” said Hughes during a series of discussions with Emer McGarry, curator at The Model, where this exhibition originated. “At a certain point I wondered what would happen if I emptied out the symbols and tried to work without reference to essentially linguistic ideas. I soon discovered that this was a folly as the world follows you into the work anyway.”

Hughes is a generous artist, and is not the type to push you away by captioning work with a series of annoying Untitled I, II and III exclusions. Instead he gives us clues to those intersections with the world. Titles such as Carnivale, Nebula, Cascade and Badass hint us into the work. Then there’s his Circus series (one to seven), a set of colour blocks, like children’s toy bricks, laid out in grids, following one another around the paper. It would be easy to step back and mutter words about how your five-year-old could have done it. But stop: first of all, your five-year-old didn’t; and secondly, there’s something deeper going on here.

A thing about colour, which is both tragic and magical, is that it can only be explained in relation to itself. Try to describe the green you’re seeing when you look at a lush lawn, and you soon find you can only bring up comparators, which isn’t much use if the person you’re with sees green as what, to you, is blue. Anyone who has ever got stuck in one of those circular arguments over whether that lovely top is orange or pink will know that, looked at like this, colour is a metaphor for the impossibility of ever fully understanding someone else’s perspective.

Part of the reason for this is that colour isn’t a matter of fact, but of perception, and this is surely one of the reasons that abstract art like this has fascinated since first cameras liberated the painter from coming up with things that looked like things. Now they could make things that feel like things too.

In this, Hughes’s work sits in a distinguished line of artists trying to get behind the language of image and symbol, including, on the op art side, Bridget Riley, and, in the pure geometries field, Piet Mondrian.

Weave, a large acrylic on cotton, in which rectangles in shades of grey are punctuated with bright candy-coloured squares, took me right back to Mondrian’s famous Broadway Boogie Woogie, which he painted in 1943, after his move to New York. That work is an amazing dance of chance encounters, geometries underlying the seeming chaos and the adventure of popping colour everywhere – a very apt rendering both of the city and the New York state of mind.

Another artist whose gestures are everywhere in this show is Brian O’Doherty. O’Doherty’s use of the lines and spaces of Ogham as a metaphor for the hidden languages of structure, emotion and feeling that lie behind – and therefore reach far deeper than – word and image is paralleled in Hughes’s grids. That said, Hughes, here and there, brings in more organic forms, swirls and dots, which also hark back to earlier phases of his own work.

All in all it’s a satisfying adventure, so forget literal meaning, and you might find you gain something rather more.

Chris Doris: The Space Between ***

Shown alongside Strange Attractors, Chris Doris picks up on that idea of exploring the things that colour can do. The fascinating thing is that colour doesn’t really exist, not in a fixed, stable way. Light changes it, as does the way our brains and eyes work, so it’s a uniquely personal experience.

Mark Rothko, whose work is a clear influence on Doris’s Open Painting series, used to sit in his studio for hours, watching the changing daylight altering the subtleties of his shimmering colour-field paintings.

When you’re depressed, a trick to ease the mind is to concentrate on colour. Focusing on the grey or blue of the sea, or the greens in nature, can go some way to relieving your brain of circling thoughts. Colour appreciation is, apparently, connected to different neural pathways. It’s no surprise then to discover that Doris, who graduated from Dún Laoghaire College of Art in the mid-1980s, also works as a healer, and there’s no doubt that looking at his gentle gradations of colour – a pale mauve, outlined on three sides with ochre; olive green, with a greyer green border – has a calming effect.

These works are also in a direct line to Josef Albers, whose hundreds of paintings and prints based on different-coloured squares, known as Homage to the Square, were begun in 1949. In these, Albers explored how colours inflect one another. Red makes blue recede, yellow can cause orange to sing. “All my doing,” he wrote, “was to make people see.”

In Doris’s hands, the colour choices are, instead, a set of gently profound invitations to meditate. Seeing, maybe, but in the mind’s eye.

In contrast, Who Goes There is a grid of 200 A4 images on sandpaper. Black and white scratchings of words and images, veering between anger and resignation, declamation and introspection: the mental noise, perhaps, that makes respite so necessary.