An absorption with substance and finish, as antidote to a fast-paced world

Aidan Dunne: Finding a handle on Niamh O’Malley’s new sculptures at the RHA 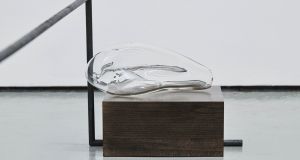 The RHA’s main gallery is a big room, and a solo exhibition there involves taking on the scale in one way or another. Various strategies have been tried, with varying degrees of success. Niamh O’Malley’s approach doesn’t depend on making any great dramatic impact. Instead she populates the space with a large number of abstract, generally non-massive pieces distributed at an even, rhythmic pace, as though it’s a kind of sculpture gymnasium. There’s even a large LED monitor flickering away in the midst of the various pieces of “equipment”.

The equipment analogy is enhanced by the linear character of much of the work: black steel bars arranged in different configurations, vertically and horizontally, obscurely purposeful in appearance, punctuated by clusters or blocks of other stuff – glass, wood, metal. Then there is the show’s title, in lower case lettering: handle. As you make your way around the exhibition – carefully, given its angular and fragile elements – you’ll encounter several handle-like forms incorporated in different pieces. Handles imply approachability and utility, but O’Malley doesn’t encourage interaction or provide any real clues as to function, even though segments of particular works might evoke doors or windows, say. Perhaps her intention is more figurative: to get a handle on something, opening up a line of access to the sculptures. Which does happen.

O’Malley was born in Co Mayo, a county of many contained settlements surrounded by vast, distinctive spaces, intricately involved with the Atlantic through its complex coastline. She studied art in Belfast. While she has made work set in Mayo or nearby locations, she is not a landscape artist per se, and her preoccupation has been more with human perceptions of the surrounding environment, be it domestic, urban or rural.

From early on her work has occupied an in-between space. Between a fixed moment and the flow of movement, as in her landmark The Dene Vignette, which projected a video of people moving through urban parkland onto a painted representation of the park. Between visibility and slippages in, or barriers to visibility, as in Nephin, an account of how we can fail to register something in plain sight and familiar. Between the fixed and solid and the fleeting and intangible, recurrently.

In relation to the work in handle, she writes of her current instinct towards the fixed and solid: “Perhaps this comes out of anxiety, a sense of a too-fast changing, unreliable world. I’m not sure what it means to be absorbed and to scrutinise, to give attention to making, handling and touch in these circumstances, but that is what I find myself doing.” Perhaps there’s a kind of caring, an attentiveness, in this absorption with substance and surface finish.

Together with this tendency, there is a corresponding desire to orientate and move the viewer in relation to the work, so that in a sense we stand in for the moving images that played a more significant role earlier on. That sounds as if it could be prescriptive, if we were being obviously directed around, but it should be said that negotiating your way through handle is not like a visit to Ikea, where your path is strictly ordained, or to one of those museum or interpretative centre displays where you are similarly corralled into a narrative trajectory.

You’re invited to explore the exhibition, rather than being hustled through it, to find your own path through the maze, though the visual language of the work, which includes barrier-like structures, forms suspended high overhead, lines extending out of one’s line of sight and more, not to mention many slivers of glass, invites a degree of wariness. It’s not that it’s actually menacing, but it tends to read that way. You are inclined to think about how to negotiate your way around each piece rather than taking anything for granted.

The LED screen, of a kind often used for advertising displays, shows video footage, apparently shot on the move, of a tract of vegetated landscape. But a regular, lurching movement disrupts continuity. It resembles the effect of flicking through images on a Smartphone, which is pretty much what it is. O’Malley shot the landscape on an iPhone, then screen recorded the movement of her finger “swiping through the ‘live’ images on the phone”. Simple enough, though ripe for multiple interpretation: nature as an all too dispensable backdrop; diminishing attention spans; a failure of perception.

O’Malley is very taken with glass as a material in her work. If transparent, it offers a view on to a scene and often it frames the view. It can also fragment the view or obscure it. Though transparent, it is a solid, or at any rate a liquid that might as well be a solid. It features a great deal, in many forms, in handle, and it adds to the show’s abiding sense of edginess and unease. For all the felicities of surface and form on offer, we are never allowed to settle into relaxed aesthetic contemplation.

Can you be racist against white people?
3

Steve Coogan: ‘Come Out, Ye Black and Tans is two fingers to the British’
4 Why Dr Seuss is the real hero of children's literature
5