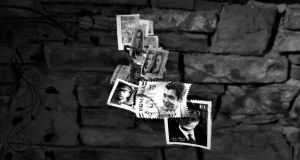 This survey show highlights the core of Conor O’Grady’s “projects and research topics”, coming from a relational aesthetics perspective, in the form of sculpture, moving image works, drawings and more, made since 2009. He addresses the process of the damnation of memory, or perhaps banishment from memory – that is, the systematic erasure from public record of a person, organisation or ideology. He sees this happening to many minorities and marginalised groupings today.

As Leonard Cohen sang: “Thank you for those items that you sent me… the monkey and the plywood violin”. The items, in this instance, include a trumpet, ostrich feather dusters, some tools and electrical bits and pieces, all shipped from Tokyo to Dublin by Yuko Mohri. From these things, plus additions garnered on forays to (charity?) shops and warehouse retailers – a lot of electrical cable – she has assembled her unpredictably kinetic exhibition, with unpredictable sounds, including the sea.

In Patrick Horan’s meticulously made, asymmetrical diptychs, one painting  represents two nude figures, male and female, lying intimately together amid bed sheets; the other is a close-up view of a section of earth. In each case the latter is an almost all-over composition of organic, interconnecting forms. But then, he seems to imply, that also describes his paintings of couples.

Curated by Michele Horrigan, Simon Lincoln and Sean Lynch, the title is from R Buckminster Fuller’s 1968 book. Hough (who explores the neo-pagan Fellowship of Isis founded in Carlow in 1976) and Marron (a video on the instinct to build, looking at Craigavon) are the IAA’s inaugural artists in residence. Also included are some of Carson’s 1977 conceptual projects and Stuart Whipps delves into the tangled weave of human interactions with the landscape.

Previously on view in Limerick, a survey of the paintings of Limerick-born Robert Ryan. In resplendent landscapes, “generic creatures wander like lost souls.” He is describing the mystery and strangeness of the way living beings find themselves in the world, in images charged with a sense of wonder, and a feeling of inherent fragility against the vastness of space and time.