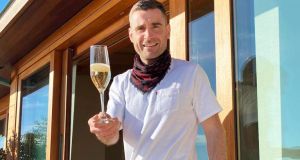 Dave Stewart says the Irish community have an incredible work ethic, which works in their favour

Opportunities to work beachside in Malibu don’t come around very often, so when restaurant manager Dave Stewart saw his chance, he went for it.

“As a kid I watched things like Baywatch. I followed American sports, I listened to bands like the Beach Boys. You can’t help but dream about being there.”

After growing up in Malahide in Dublin, Stewart got the travel bug well before landing in tinseltown in 2016. “After finishing school in 2000, I studied CAD – computerised design – in Dún Laoghaire College of Art and Design. I worked in design after completing his degree.”

But the outback came calling. “My now wife and I travelled across Africa, India, South East Asia and ended up in Australia. We were away for two years, working in hospitality along the way. It was a great time, we hadn’t a care in the world.”

But the mood was different back home and when they returned, Ireland was heavily affected by the recession.

“When we got home, I decided on changing careers into hospitality. I thought about teaching but my passion was in the service industry and I had worked in bars and restaurants in Australia. I got a job in Herbstreet restaurant on Hanover Quay, Grand Canal and, in terms of career choice, never looked back.”

In 2012, the couple decided to move to London, where Stewart had his eye on working with Soho House and Co.

“My wife Kate and I wanted to spread our wings and expand our careers. So I went to a restaurant called Pizza East in Shoreditch in London, which is part of Soho House and Co to ask if they had any managerial positions.”

Soho House is a London institution, which first opened in London’s Greek Street in 1995 as a members club for local artists, actors and those with a ‘creature soul’ to eat, drink and mingle in comfortable surroundings. As it’s out of the public glare, Soho House is popular with A-listers from Victoria and David Beckham to Kanye West and everyone in between. Since opening, Soho House now includes 27 houses in 10 countries, with more openings in Europe, Asia, and North America.

“They didn’t have a managerial role but I was given a waitering job and just months later, I got a job at the new Pizza East in Kentish Town as a manager.” Stewart was to return to Shoreditch some years later to manage the restaurant there, going full circle in the process.

“London is tough, a slog at times, but it gives certain tools to progress. It makes you fight a little harder to succeed. We wouldn’t have had it any other way and, looking back on it, it was a huge stepping stone and a wonderful time in our lives.”

In March, 2016, however, a general manager role at Little Beach House in Malibu, just off the Pacific Coast Highway in the US presented itself.

“My wife and I had been saying to each other for years how one day we would live here. She had already been going back and forth to LA from London with work and loved it. The opportunities seemed endless and it was an exciting prospect.”

After applying and subsequently getting the position, Stewart and his wife were in Los Angeles within two months. Little Beach House, which is part of Soho House and Co in Malibu, attracts people involved in film but also creatives and artists with quintessential unobstructed views of the Pacific, and the sunsets made famous by US TV series.

Just like every other industry, the venue was affected by coronavirus, and closed in March last year. “It reopened during the summer and now we are open for takeouts only as we are experiencing tight restrictions again.

“The service industry is one of the most badly hit and businesses will take a long time to recover. Some won’t unfortunately and that is truly sad.

“I am lucky as I work for a company that supports everyone in the organisation. These are definitely challenging times and no doubt there will be more, but you have to keep moving forward and believe in the journey you are on. Service industry people are resilient. We will bounce back.”

Stewart says there is a strong, supportive Irish community in Los Angeles. “People have gotten behind one another and encourage each other in many different ways. We’ve been lucky to have great friends and family here. We spent Christmas with my aunt – model and actor Olivia Tracey – last year, which was a blessing.”

He says, the Irish community have an incredible work ethic, which works in their favour. “I’m very proud to be part of a community that is so well received and celebrated here. People are out for success over here, which is good, as you have to keep up with that.

“In terms of visas, I have an L1 visa, which is sponsored from my job, so we can stay here for the long haul. But Dublin will always be our home. We miss our families so much, especially now.

“Luckily our families have been amazing in supporting our decisions to be away from Ireland. We’ll be home again whenever we next can and I can’t wait.”

Stewart says he has been blessed with balmy weather and access to the great Californian outdoors.

“We can stay within country lines [during Covid], so we have lots of outdoor offerings. The weather here has been lovely – almost 30 degrees at one point in January. So we can go the beach, which is wonderful, especially with our young family.

“But whenever I get homesick, I’ll listen Damien Dempsey, Soft Rain, and then I can get transported back to Ireland.”