‘Covid has not helped the diversity agenda’ 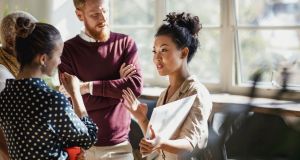 Ongoing development of a strong talent pipeline is very much linked to the diversity and inclusion culture within an organisation. File photograph: Getty

Coronavirus may have turned how companies do business on its head, but it hasn’t changed their fundamental need for good people.

Without employee buy-in, many organisations would have struggled to weather the crisis and this is not the time to ease up on talent planning, says David Collings who is Professor of Human Resource Management at DCU Business School.

“The ongoing development of a strong talent pipeline is very much linked to the D&I [diversity and inclusion] culture within an organisation and organisations tend to come at it in one of two ways,” he says.

“The first is almost as a tick box exercise. This is usually in response to something, such as a report about the lack of diversity in their organisation or because it’s the subject of legislation or an employment case. In other words, there’s pressure to do it. These organisations also favour high profile initiatives that everyone can ‘see’ but are often little more than window dressing.

“The other approach is much more positive. It’s where diversity is ingrained in the organisation’s culture and has real sponsorship from senior leadership.”

One company putting its money where its mouth is on the D&I agenda is the international catering and facilities management company Sodexo. It has a global chief for D&I (Irish woman Margot Slattery), who oversees a team of D&I managers working worldwide. The company’s aim is to think globally but act locally to integrate D&I policies under five headings: cultures & origins, gender, generations, disabilities, sexual orientation/LGBT+.

“We recognise the benefits diverse teams bring to our performance,” says Raj Jones,  D&I manager for Ireland and Britain. “Our own gender balance study (carried out over five years and reported on in 2019) demonstrates this well, with better client retention, enhanced employee engagement, a better safety record and improved operating margins.”

Jones says that, with half a million employees looking after the needs of 100 million people worldwide every day, Sodexo believes it can leverage D&I for the greater good.

“Transparency is important and we often share our approach with clients, customers and other stakeholders to contribute to wider societal change,” she says.

“We were early adopters of gender pay reporting in the UK – ahead of legislation – and we are also committed to ethnicity pay reporting. Sodexo’s goal is that by 2025 women will represent at least 40 per cent of senior leadership staff. In 2018, it was at 33 per cent and we’re currently at 37 per cent.”

To reach this goal the company established a global strategy for gender equality, with initiatives such as inclusive workplace training, mentoring and gender networks throughout the group. “The cornerstone of the strategy is the SoTogether advisory board (senior executives representing different business segments and global regions) which is dedicated to promoting women’s professional advancement and gender equality on a global scale,” Jones says.

Sodexo has made a commitment to including those with disabilities in its workforce and is currently looking at designing workspaces to suit them while it also has a race and ethnicity taskforce led by senior leaders from ethnic backgrounds.

“This group has led our BeHeard campaign which was a series of listening groups specifically for black colleagues to share their lived experiences of working at Sodexo. Their feedback led to the identification of a number of recommendations.

“We also have an employee network specifically for Bame (Black, Asian and Minority Ethnic) colleagues and allies,” Jones says.

With the focus among executive teams now moving beyond firefighting to future planning, Prof Collings says that analysing the talent pipeline and specifically looking at where the blocks are, is crucial. For example, if an organisation’s senior management team is all white and male and the management tier below them is too, succession is unlikely to change the diversity composition in that C suite any time soon.

“Companies need to be pro-active in creating a diverse talent pool for the future and to take a hard look at what’s getting in the way of it happening in their business,” Collings says.

“One of the stumbling blocks is that diversity is often considered through a very narrow lens. People don’t see much beyond gender, ethnicity and sexuality.

“But it’s a much wider conversation and should include those with disabilities, those who are neuro diverse and two other cohorts that rarely get considered part of the D&I agenda. The first are women whose careers have been derailed because organisations treat them differently if they’ve taken maternity leave and the second are those caring for older family members who often don’t qualify for the same family friendly initiatives as those with children despite having a major caring role. Covid has not helped the diversity agenda,” Collings adds.

“There is clear evidence that it has had a disproportionate impact on women and other groups. For example, we’re involved with company internships for young people from disadvantaged backgrounds and we’ve seen a 60 per cent drop in placements during the pandemic.”

Simple changes, that often cost nothing to implement, can make a huge difference to inclusion Collings says. “One example is where meetings are scheduled for times of the day that make it impossible for some people to attend because of outside responsibilities. Very often there is no good reason why the meeting should be held at that time. It just got stuck there historically.”