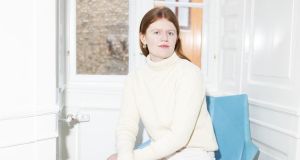 Writer, lecturer and creative consultant, Dubliner Isabella Rose Celeste Davey is head of communications and digital for Copenhagen Fashion Week, which was running this week, and has been resident in the Danish capital since September 2019.

Schooled in Mount Anville in Dublin, and a graduate in art history and classics from Trinity College Dublin, she is the daughter of art conservators. Her father Ranson Davey, now retired, was senior paper conservator at the National Gallery of Ireland. Her mother Susie Bioletti, from New Zealand and of Italian ancestry, is head of preservation and conservation at Trinity College.

Her parents moved to Dolphin’s Barn in Dublin from Canberra where Davey grew up with her sister Tallulah May (now a marine biologist). She credits her parents with her interest in all artistic aspects of expression, including fashion.

Prior to her appointment in Copenhagen, Davey worked for the British Fashion Council in London on designer initiatives and creating the show schedules for London Fashion Weeks. Gregarious by nature, she was known for her friendship, enthusiasm and support for Irish creatives such as Richard Malone and Richard Quinn.

Now her work covers Copenhagen’s two fashion weeks, in February and August, “and they are full on”, she says. “We are trying to make alignments with leading sustainable fashion brands as well as looking to see what we can do interseasonally as well,” she explains.

She lives in the centre of the city in a street she compares to Dublin’s South William Street, in an apartment in a 19th century building “that feels like living in a boat because the walls dip into each other, the ceilings are low and the floorboards creak, but there is a great feeling of history and authenticity”.

In a city where cycling culture is long established, she cycles everywhere. “When I worked with the British Fashion Council, people would arrive at fashion events in Mercedes and big cars, but here some of the biggest industry leaders arrive on bicycles, so there is a sense of egalitarianism.”

Moving from London where she lived in Hackney, “it was nice to feel in a community again. The population is the same as Dublin, but what is incredible here is the high level of creativity across so many Nordic industries.

“The fashion industry has grown exponentially, and I think the reason is that they design democratically with everyday women in mind. There is a very special look to Scandinavian style and I think it is very approachable and relatable.”

Copenhagen has been in lockdown, but it is a very different experience there. “Because of the Danish approach to home and the concept of hygge or cosiness, staying at home is quite natural for them and people create beautiful interiors and environments. That was a pleasure after years of living in London where life is lived outside rather than inside.

“So, people here have adapted quite naturally to the new realities. Danish people prize good food and good cooking and their ideas of extracurricular activities don’t centre around going to the pub or going for dinner.”

Living beside the harbour, she has daily swims in its cold water – “you get in and you get out and you feel incredible. Whole families do it and it’s just part of life here”, she says.

Attitudes to work are different too. “Danes really respect home life and switch off as soon as they get home. Women can be leaders here, but also have the right to be mothers.”

Before taking up the job in Denmark, Davey worked as brand manager for an award-winning London jewellery company called Alighieri, masterminding its promotional campaigns. “It grew 500 per cent in one year, turning over €3 million. I was the most senior person in the company after the owner, but in the end it was too stressful,” she recalls.

Copenhagen’s diverse food and music scenes are huge attractions. But what she most relishes about Copenhagen Fashion Week “is its sustainability aspect which is not only vital, but inspiring in the change it is incurring, so I feel I am making a difference in what is such an important issue”.

“Our dedicated CEO, Cecilie Thorsmark, is driving massive change in our fashion industry with her three-year sustainability action plan, so it is amazing to work with her.”