Wild Geese: Citrix executive vice-president PJ Hough took the leap to the US in the 1990s 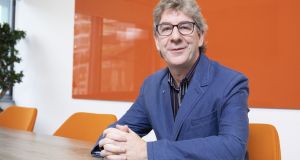 Citrix chief product officer PJ Hough: “I’ll say the rumours of the Bay Area are not exaggerated: it’s everything they say it is.’ File photograph: Peter Houlihan

“As my mother would say ‘you didn’t land in Hill Street Blues’. We moved to quite a normal part of America from a cultural integration perspective.”

When Tipperary man PJ Hough set sail for Seattle, it didn’t seem too big of a culture shock.

“Our families thought we were mad. This was at a time where permanent pensionable jobs in Ireland working for an American company meant you were set up,” the Borrisokane man recalls. “We went as far away in America as any of our family had ever gone. Nobody had ever been to Seattle, no one had heard of Seattle. This was 1994 and no one had heard of Microsoft. ”

Hough is now based in Santa Clara where he is executive vice-president and chief product officer for software company Citrix. If anything, it is this last move in career that has “cultured” him the most.

“It was very much a shock to the system,” he says. “I’ll say the rumours of the Bay Area are not exaggerated: it’s everything they say it is. It’s busy, the traffic is terrible, the weather is great, the industry is vibrant – what an amazing place to live.

“It was somewhat unintentional when I was looking at companies and thinking of going back to work. Looking back on it, I’m learning a lot about our own industry by being in Silicon Valley.”

Now heading up the entire product portfolio at Citrix, Hough has spent his working life exploring his curiosity. As a child, that curiosity first emerged when he taught himself to use his school’s only computer, an Apple 2.

He then broke the borough boundaries, going on to study computers in Dublin. He worked as a consultant in the Galway office of Digital Equipment Corporation (DEC) until its downturn but, surviving the cull, Hough made it to their Dublin branch.

The green card lottery then provided the opportunity to start looking for positions in the US.

“Microsoft actually had a high regard for people at Digital and, when the downturn happened at Digital, they hired a number of the senior engineers to come to Microsoft. I would always have said that there was an engineering culture in both companies that was very similar but the management culture was very, very different. Bill [Gates] had a very different philosophy of managing Microsoft than the management team at Digital.”

By comparison, he says, Microsoft was a “very driven company”.

“Every day you woke up and you felt like you had to do better than yesterday; personally, the team had to and the company had to. We were in an industry that was moving incredibly fast and moving fast was one of the things that was a necessity.

DEC at its roots had a hardware heritage. In hardware, you do get to celebrate for longer but the world of software changes so fast that you did a version of something and then people were looking for the next one. That also is a little bit of the difference in the two companies.”

My parents let me off to Dublin to do this computer course. Aside from the computer that I had shown them, I’m pretty certain they’d never seen one

Emigrating can often mean leaving family and friends behind, missing out on some of the significant moments in your family members’ lives but, for Hough, this was always non-negotiable.

“One of the commitments we made when we moved abroad was, if there was something significant in the lives of our families, it was up to us. We were the ones who moved, it was up to us to make the effort to get back – that’s how we made it work.

“Thankfully technology and travel has made the world a smaller place and every time the world gets smaller, we take advantage of it.”

Leaving a corporation such as Microsoft once Office 2013 shipped, after a career working, innovating, learning and leading, Hough started thinking about shipping too. After 21 years with the corporation, he decided to take a break. With his wife and dog on board, he jumped into his campervan and took to the road with one mission in mind, to visit as many US national parks as they could.

“I couldn’t think about anything else until I at least stopped doing that and so I created a gap and stepped away. I saw parts of the US I would never have otherwise seen.”

In 2016, Hough was ready to get back to work and joined the team at Citrix.

Now as he watches his own daughter leave home, to start a career that doesn’t follow in the family footsteps, he thinks back to that stage in his own life. A country boy with a curiosity for computers, not satisfied that they could only do what the manual said they could.

“My parents let me off to Dublin to do this computer course. Aside from the computer that I had shown them, I’m pretty certain they’d never seen one.

“That was probably a very delicate time. If my parents had said ‘are you sure?’ or ‘we don’t think so’, it would be easy to undermine the confidence of a teenager who was thinking about taking a risk and going to do something daft like that.”

It’s a risk that paid off.

1 Why are markets booming when a crash is on the way?
2 Income tax receipts prove remarkably resilient to coronavirus
3 High Court appoints interim examiner to Compu b parent company
4 How to further divide the economy using the wage subsidy
5 Brexit: System agreed for Irish goods to skip checks on UK trade
6 Rosslare Europort in line for €30m upgrade from Irish Rail
7 Could your old car be giving away all your secrets to its new owner?
8 Why UK supermarkets are not making super profits
9 Home or car: what’s the best use of my savings?
10 European stocks pause as coronavirus worries offset rebound hopes
Real news has value SUBSCRIBE