The gloomy world occupied by women in the workplace 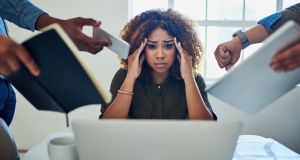 Research shows women in professional services tended to be the happiest at work while women in banking and financial services were the most unhappy. Photograph: Getty Images

In February, Maggie Brereton and Ina Kjaer handed in their notice at work. On the face of it, there was nothing unusual about it. People leave their jobs all the time. What made their decision to quit significant, however, is the fact that both women were highly respected senior partners at KPMG in Britain and their very public departure was a kick in the teeth for the establishment.

Brereton and Kjaer left because they were tired of an organisational culture that was particularly hard on women and minority groups and had failed to respond appropriately to serious claims of bullying by a senior executive. They have since set up their own consultancy and plan to disrupt how the deals advisory market has traditionally done its business by employing a more diverse workforce and giving a wide berth to bruising working practices such as overly long working hours, gender pay gaps and allowing high performers to get away with conduct unbecoming.

Brereton and Kjaer are not untypical of a growing cohort of mature women choosing to change job or leave the mainstream paid workforce because they are disillusioned with organisations stuck in a time warp that are unable or unwilling to change.

This haemorrhage of talent is a trend in Ireland too, says Ciara Garvan, founder of recruitment and training consultancy Workjuggle, who is seeing women like this all the time.

“I was looking at so many talented and successful career women wanting to leave their jobs that I decided I had to delve deeper and try to understand the ‘why’ better,” she says. Garvan began a piece of research with a 400-strong sample group, aged between 35 and 44, educated to master’s level and working fulltime with pre-school or schoolgoing children.

At the end of it she knew that women in professional services tended to be the happiest at work while women in banking and financial services were the most unhappy. Over a third of those surveyed were actively looking for a new job.

“The results can be clustered into three key areas: working culture; flexible working opportunities and; better gender diversity at senior levels which would indicate a more inclusive environment,” Garvan says.

“In our experience women want to work for companies with great values where there is a high trust environment. When people say ‘great values’, I always think of Daniel Pink’s book Drive in which he asks what really motivates people and comes up with three things: purpose, autonomy and mastery. This resonates with what I find when working with candidates.

“They really want their work to have a purpose, not least because, if they are going to devote 40 hours a week to it, they want it to make a difference. I hear this most from working parents and young millennials. Autonomy amounts to having a level of control over your work and not being in back to back meetings that serve no real purpose and mastery is about being allowed to do something really well and building meaningful relationships,” Garvan says.

Brereton and Kjaer want their new company, Eos Deal Advisory, to have a structure that makes it easier for women and minorities to work there. For example, no all-night sessions or excessive after-hours working. They also have a zero per cent gender pay gap – something that immediately marks them out as different in a sector where discrepancies of up to 20 per cent are the norm.

Brereton and Kjaer are high profile examples of employers paying more than lip service to implementing diversity and inclusion policies and closing the gender pay gap. However, it seems that just as soon as one troubling gap is closing employers are about to face another that is opening up.

According to the World Economic Forum (WEF), the next big gender gap will be in the area of advanced technologies because the automation of jobs and the development of artificial intelligence (AI) is going to have a bigger impact on women than on men. AI is set to become a booming jobs sector, but as of 2018 the WEF says women only make up 22 per cent of roles in AI, creating a gender gap that is three times greater than in other industries.

It also notes that this gender gap has remained constant over the past four years even as the overall number of professionals with AI skills has risen. This suggests a hardening talent gap that will require focused intervention to change.

“In an era when human skills are increasingly important and complementary to technology, the world cannot afford to deprive itself of women’s talent in sectors in which talent is already scarce,” the WEF notes.

Within AI there is also a gender imbalance when it comes to areas of expertise. Women are more prevalent in areas such as information retrieval skills, natural language processing and data structures but underrepresented in some of the really crucial emerging skills such as deep learning and neural networks.

Broadening it out, the overall picture for women in the workplace remains gloomy. The WEF says the number of women in managerial roles in public and private sectors is growing and pay discrepancies have narrowed. However, at the current pace of change, it estimates it will take 202 years to close the gaps women face based on disparities of earnings and representation in senior and top jobs.

1 How can I view my dead brother’s will if I’m not the executor?
2 Provisional liquidator appointed to Dublin engineering firm
3 Bursting of Tesla bubble a case of ‘not if, but when’
4 Finance Ireland’s IPO, Huawei and Irish 5G, and pay rises at Bank of Ireland
5 ‘Germans are very efficient and reliable. Cancelling is alien to them’
6 Bank of Ireland staff in line for 2.95% pay increase
7 US reiterates opposition to Huawei equipment being used for Irish 5G
8 Finance Ireland plans stock market flotation in May
9 What’s in a name change?
10 Must you pay a price for ethical investment?
Real news has value SUBSCRIBE