Businesses can only gain from adapting to needs of Generation Z 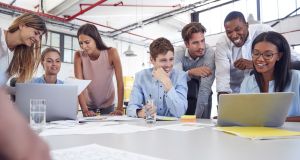 Millennial managers are beginning to face a generation gap of their own as Generation Z enters the workforce. Photograph: iStock/Getty Images

When the first wave of millennials joined the workforce around 2000, their Baby Boomer and Generation X managers struggled to understand them. Now the shoe is on the other foot. Millennial managers are hitting middle age and facing a generation gap of their own as their successors – alternately known as centennials, Generation Z and screenagers – have begun entering the workforce in significant numbers.

The most mature members of the centennial cohort are roughly 24 years old and while they may have learned a thing or two from watching the millennials at work and play, their outlook on life is distinctly different not least because they grew up in the shadow of an economic crash followed by a recession.

Millennials were confident trailblazers who turned received wisdom about the world of work on its head, often in a good way. However, this also made them hard to manage as they saw loyalty to an employer as a somewhat outdated concept and were quite prepared to job hop for status and material gain.

Centennials by contrast, are more cautious and see self-actualisation and career development as two sides of the same coin. This makes them more likely to stay with an organisation if it offers them a clear path of well-defined personal and professional growth opportunities.

Also informing their mindset is the rise of the gig economy, which is going to have a massive impact on the structure of their working lives. They can see its advantages but also its downsides and recognise that, for their generation, working and living may be more about achieving a blend than a balance.

As a group, centennials are credited with being autonomous, creative, innovative and independent thinkers, all skills that make them an ideal fit for fast-moving business environments, according to Sinéad D’Arcy who heads the Irish Distillers Jameson graduate recruitment programme.

“Generation Z are not as needy as millennials and, once they know what’s expected of them, they fly,” she says. “This makes practices such as mentoring and induction really important for this group, who do best when they’re let get on with things – with guidance – and given the chance to develop the skills they need to succeed.

“For a company like ours that is constantly adapting to new challenges, their mindset is ideal because they are full of bright ideas and want to progress. In our experience, they are also more likely to be loyal because they are prepared to take the time to choose an employer that will be right for them for the long-term. Our retention rate from the programme is over 50 per cent with many of the graduates going on to work either within Irish Distillers or the wider Pernod Ricard group.”

D’Arcy says the companies most likely to struggle to attract and retain centennials are those not agile enough to pique their interest. “This group wants to evolve at work, they also want to grow and this means being able to offer them lots of different engagement opportunities,” she says. “For example, if they start in sales, they want to know they’re not stuck there and can move into roles in HR, or digital marketing or finance in the years ahead.

“This generation are also true digital natives, with excellent technology skills that should be leveraged by the companies they join,” D’Arcy adds. “On average, centennials live their lives with five screens open at a time across different devices and this is actually a big plus because it makes them really good at juggling and multitasking.”

The downside of the centennial’s umbilical connection to tech, however, is that they have an average attention span of just eight seconds. This compares with 12 seconds for millennials.

“Generation Z-ers want to move forward at a pace that’s incompatible with the practice of earning one’s stripes,” says one manager whose responsibilities include bringing through about 40 graduate recruits a year. “They’re keen to please and do well and, in many cases, they’re very capable. What they’re missing is the experience piece and they find that hard to accept. They want to be at the top of the mountain but to get there by helicopter rather than by slogging their way up.

“In my experience, they don’t like to be micromanaged but at the same time they want you there in the background constantly providing reassurance and encouragement,” he adds. “One of the ways I deal with them is by giving them self-contained projects where they can cut their teeth without causing a major meltdown if they screw up.”

The Jameson graduate programme, which recruits internationally, is now in its 28th year and applications for this year’s programme which will offer opportunities to work in emerging markets in Africa, Asia and Latin America, close in mid-January.

“Each year we look for graduates with ‘serious character’ who are driven, charismatic and creative,” D’Arcy says. “In our experience these are all qualities that Generation Z-ers have regardless of what discipline they come from. We have recruits from law, arts, the medical professions and teaching.

“The main aim of our programme is to provide the graduates with the resources to establish our brand in a seed market or to accelerate its growth in an established one while at the same time helping them to build their professional confidence and competence.”

1 Knock gets visit from world’s largest passenger plane
2 How do you know if you are wealthy? It’s not straightforward
3 Galway development could transform skyline with 21-storey tower
4 Judge asks if injunction being sought ‘to facilitate a dog’
5 High Court overturns permission for height increase in Johnny Ronan apartments
6 Chinese state may bail out Avolon’s main shareholder
7 How can I view my dead brother’s will if I’m not the executor?
8 Barclays scraps system monitoring how long staff spent at desks
9 Planning permission refused for major new office block in Galway city centre
10 Green Reit recruits Arthur Cox to help get planning for new cinema
Real news has value SUBSCRIBE