The Irish Times Business Person of the Month: Pat McCann 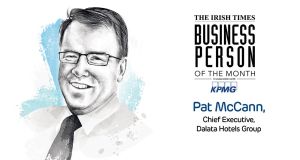 Dalata Hotel Group chief executive Pat McCann has been chosen as The Irish Times Business Person of the Month for September, an award run in association with KPMG.

The country’s largest hotel chain said in early September that it expected to post record revenues across a number of its properties during the month. It also published results showing a 19 per cent increase in profits for the first half of the year.

Dalata’s pretax profit increased to €42.2 million in the six-month period on revenues of €201.9 million, which were up 12 per cent year on year.

McCann told The Irish Times that room prices in its key Dublin market weren’t softening, in spite of extra capacity coming into the market and the impact of Brexit on visitor numbers from Britain.

Having successfully built out its portfolio in Ireland in recent years, Dalata is now increasing its presence in the UK, in line with its stated aim to build up to 8,000 hotel rooms there. It announced last month that it had acquired a site in Shoreditch, London for €35 million that comes with planning approval for a new hotel. The site, which will operate under the Maldron brand, will have between 130 and 140 bedrooms and is expected to open in early 2022.

In May, Dalata was chosen as Company of the Year in the 2nd annual Irish Times Business Awards, in association with KPMG.