Lustful leaders: The good, the bad and the narcissistic 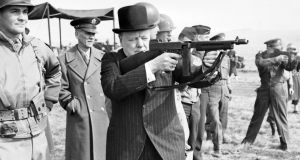 Winston Churchill: A characteristic of lustful leaders is insatiability. Churchill, commenting in 1938 on the rise of Adolf Hitler, said the appetite often “grows with eating”. Photograph: Capt Horton/Imperial War Museums

Herring grew up to be Elizabeth Warren, US senator and would-be president, fuelled by a “lust for success”, according to Barbara Kellerman. “Lust really separates most ordinary leaders . . . from the exceptional ones,” the Harvard Kennedy School leadership professor told me last week.

Lust goes well beyond ambition – “wanting it more” – considered a necessary quality for success in many domains. Lust is also unteachable, as Prof Kellerman and fellow academic Todd Pittinsky lay out in a new book, .

Grit and drive – two leadership qualities that were largely ignored until recently – can be acquired and practised; lust is innate. The professors offer no checklist for people seeking to find their inner lustfulness. There is no “Lust 101” course at business schools.

Less forgivable, Kellerman says, is the failure of the “leadership industry” to study lustful behaviour.

She reckons most business schools and leadership gurus indulge in wishful thinking about what leaders should be like, rather than what they are like.

“Leadership and balance, leadership and moderation, go hand in hand only some of the time,” her book points out. “Other times they do not. In fact, sometimes leadership, including exceedingly effective leadership . . . is quite the opposite.” Apple’s Steve Jobs, Tesla’s Elon Musk and other driven business leaders come to mind.

Yet even if few are born to be lustful leaders, many will be drawn to follow such men and women.

We should learn how to avoid the bad leaders and pick the good ones. Otherwise, we are destined to be led into very bad places, because another distinguishing characteristic of lustful leaders is that they are insatiable. To paraphrase Winston Churchill, commenting in 1938 on the rise of Adolf Hitler, their appetite often “grows with eating”.

Kellerman and Pittinsky extend the familiar triad of lust for power, sex or money to create a wider taxonomy, which includes lust for success, for legitimacy and for legacy.

This helps support their proposition that lust is “value-neutral”: Hitler is one of the first leaders they mention, followed shortly by Gandhi. Nelson Mandela and Aids activist and writer Larry Kramer are profiled for their tireless quest for identity and equity. Bill and Melinda Gates and George Soros join the roll call as leaders lusting for legacy.

There is a link here with recent research into leaders’ narcissism, a field that was energised by the election of Trump in 2016. Berkeley’s Jennifer Chatman, co-author of the cheekily titled When ‘Me’ Trumps ‘We’, just published by Academy of Management Discoveries, has challenged the assumption that a little bit of narcissism is an essential attribute for leaders.

Narcissists tend to be paid more, be less collaborative, less ethical and more of a magnet for lawsuits than their less-puffed-up peers. Worse, the latest study suggests, their bad behaviour infects the culture of the organisations they dominate.

Chatman recently mentioned Bill Gates as an example of a successful leader who contradicts the view that “leaders are supposed to be loud-talking and overconfident”.

Leaders Who Lust, though, uses Bill and Melinda Gates to show that “being to an extent narcissistic and being to an extent altruistic are not necessarily mutually exclusive”. Their multibillion-dollar charitable foundation satisfies their obsession with legacy and a global need for development, health and educational resources.

It is just about possible to see how old-fashioned governance might prevent leaders’ necessary self-confidence and self-regard tipping over into narcissism. MWM Consulting, an executive recruitment firm, produced a paper called Taming Narcissus in 2013 and has since developed the idea that boards, acutely aware of financial risk, should spend more time assessing “people risk”.

Lustful leaders cannot easily be tamed, however. Resisters, as many whistleblowers know to their cost, are often swept away. Followers and overseers, from elected politicians to non-executive directors, can easily become enablers of bad leaders’ damaging desires (the subject of Prof Kellerman’s next book, about President Trump’s entourage).

There is no easy antidote, except to learn about lust. And choose your leaders wisely. – Copyright The Financial Times Limited 2020

Leaders and their targets of lust

Source: Leaders Who Lust, by Barbara Kellerman and Todd Pittinsky