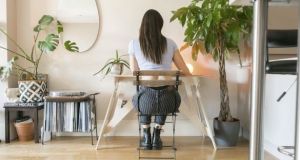 Companies like Flying Elephant targeted the work from home market with €149 desks.

Home workers across the country will be disappointed to learn that they will not be able to claim tax relief against many items, such as a laptop, printer or chair, that they may have bought over the past number of months to help them work from home.

However, there is some good news from Revenue, as home workers will be allowed a higher deduction on their tax bill for broadband costs, compared with heating and electricity.

With hundreds of thousands of normally office bound PAYE taxpayers working from home as a result of the Covid-19 pandemic, many are hoping that tax reliefs will help defray the cost of keeping a home office running.

However, the latest clarification from Revenue is likely to disappoint many. According to a spokesman, “ capital items”, such as laptops, computers, office equipment and office furniture, purchased by an employee are not allowable deductions under Section 114 of the Taxes Consolidation Act (TCA) 1997.This means that unless your employer reimburses you for the cost of such purchases, you won’t be able to get anything back from the taxman and will bear the full cost yourself. The rules for the self-employed are different however, in that such expenses can be deducted from their tax bills.

In better news, Revenue has clarified the announcement in the Budget that broadband costs will now become an eligible expense, with a deduction of 30 per cent allowed. This compares favourably with heating and electricity costs, both of which are only allowed a deduction of some 10 per cent. The broadband concession will apply for the 2020 tax year and “for the duration of the pandemic” Revenue said.

However, it should be remembered that this rule only allows you to claim a credit on the 30 per cent portion of your tax bill - and must be apportioned on the basis of the number of days worked from home over the year. So, for example, someone paying tax at 20 per cent will pay €27 less in tax by claiming 30 per cent of total broadband costs of some €450, while a taxpayer on the higher 40 per cent rate, will save €54 in taxes.

The most financially beneficial solution when working from home is when an employer pays an employee a daily stipend of €3.20 (which is not subject to benefit-in-kind), or about €800 a year, to cover their work from home costs. However, many employers do not offer this benefit, despite the change in working habits seen this year.