Dear older people, could you please slow the hell down?

From politics to business and beyond, evergreen elders are setting the bar far too high 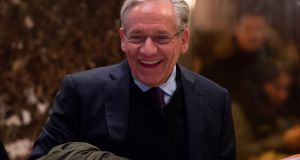 Whoever wins the US presidential election will make history for a reason that is causing an unseemly amount of anguish: their age. Donald Trump is 74. Joe Biden turns 78 this month. Either would be the oldest president ever to be sworn in.

Mr Trump already holds that record: he was 70 when he got to the White House.

Yet he is a nipper compared with the elders of Congress, where there’s a 78-year-old Senate majority leader (Mitch McConnell); an 80-year-old House Speaker (Nancy Pelosi), and a sprinkling of 87-year-olds.

Mr Biden is in the race for the White House after beating senators Bernie Sanders (79) and Elizabeth Warren (71).

If he wins on Tuesday, there is talk he will create a new position of “climate tsar” to manage his green agenda and fill it with the 76-year-old former secretary of state John Kerry – or possibly the former Democratic official John Podesta, who will be 72 in January.

America’s top business leaders are not all coltish, either.

You may know that Warren Buffett is 90. But nearly 40 per cent of chief executives in the biggest companies are over 60, say US recruiters Crist Kolder. The average age of a new chief executive has gone up by nearly 20 per cent since 2005, and 13 per cent for finance directors.

Critics do not approve of all this. They fear they may be governed by the gaga, or a weathered elite bent on self-protection at the expense of its grandchildren.

The most hyperbolic among them also claim that the use of national Covid-19 lockdowns that restrict everyone’s activity, instead of targeted measures affecting just the elderly and others most at risk, have exposed this self-serving gerontocracy’s dire traits.

I disagree, and not just because I am a quinquagenarian.

What worries me far more is the exhausting example these unwilting evergreens are setting for the rest of the workforce, including the parts I know best.

The 77-year-old Bob Woodward is still at the Washington Post nearly 50 years after he reported on the Watergate scandal – and still breaking important political stories.

In September he revealed in his latest book that Mr Trump had known early in the pandemic how deadly Covid-19 was but had played it down in public.

CBS journalist Lesley Stahl, who turns 79 next month, was at the centre of a more recent Trump story last week, after the president abruptly got up and ended her 60 Minutes interview with him in the White House.

It is not just the fact that all these troopers keep on trooping. It is the way in which they do it.

In 2018, at a mere 77, Nancy Pelosi broke modern records when she stood up and gave a marathon eight-hour speech in the House of Representatives – in 4in-high stilettos.

Her only problem, she said later, was that something in the carpet made her sniffle so she had been supplied with a constant flow of tissues.

I find this feat unimaginable. After seven months of working at home in trainers, or Ugg boots if it’s nippy, I gingerly tried on a pair of high heels for an in-person work event the other day. After managing to hobble from one end of the bedroom to the other I decided flat-heeled boots would have to do.

The US is not the only place where tireless stayers are putting the rest of us under pressure.

The other day, Ignacio Galán, the irrepressible 70-year-old who has been chief executive of Spain’s Iberdrola utility since 2001, sealed an $8.3 billion deal to buy a US group – his eighth acquisition this year.

But it is the UK that has shown that age is no match for the unquenchable nature of the competitive spirit.

One of the more cheering pandemic stories of the year arose when 99-year-old army veteran Capt Tom Moore decided to do 100 laps of his Bedfordshire garden before his 100th birthday to raise money for the NHS.

Last month Ruth Saunders, a 104-year-old former Red Cross nurse, decided to go one better and walk a marathon distance of 26.2 miles for charity. “I thought if he could do it, I could do it,” she told the BBC. “And I beat him because he didn’t do as far as I’m doing – and he’s not as old as me.” – Copyright The Financial Times Limited 2020