It’s not true that we’ve too much work to do, it’s just that we want to appear busier 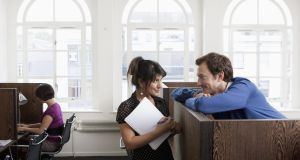 In these inhospitable surroundings dedicated chatters are being forced out. Photograph: Getty Images/Cultura RF

A couple of weeks ago I paid a visit to a media production company in east London. It was filled with hipsters sitting around large tables under a concrete ceiling.

“There’s an incredible buzz here,” said the man showing me around. I nodded obligingly, though could feel no buzz at all. In this temple to cool, no one was talking. They were all working in silence.

Every time I have visited an office since then I have kept my ears open, and every time it has been the same thing – no sound, save the gentle rattle of computer keyboards. Office workers do not seem to chat any more.

Just now I took a walk through the central newsroom at the Financial Times. Almost everyone was staring at a screen, mute. In the entire space I spotted only two groups of people talking, and both were discussing work.

It used not to be like this. Two decades ago, every working day began with a compulsory 15-minute chat about what had been on television the previous night. Anyone who had recently been on holiday, had a baby or done anything else of note would bring in photographs and show them around.

We would chat about the big issues of the day and about what we had had for lunch. Above all we would gossip about each other. In any lull, it was perfectly normal to get up and cruise the building in search of fresh people to talk to.

I have just strolled over to the desk of a colleague and perched on the edge of it, just like in the old days. Why do people not chat in offices any more, I asked. Because they have too much work to do, he said, glancing at his watch. This is what everyone will tell you; it just happens not to be true.

There is little evidence that people are working too hard to speak to each other. According to the Bureau of Labor Statistics, office workers in the US spend fewer than three hours a day engaged in productive work, the rest being gobbled up on news websites and looking for another job online. Of the five hours wasted every day, only 15 per cent was spent talking.

The biggest killer of chat is the most obvious of all – the internet. It allows us to skive while giving the appearance of being hard at work. Worse, it has made conversation obsolete.

What stops us from chatting is not that we are busier – it is that we want to appear so. Charging around with a sense of purpose is high status. Leaning back on your chair and entertaining a colleague with a funny story is not just low status; it can be career limiting too.

Office buildings have also done their bit in killing conversation. The best chats used to happen between two people behind a closed door. Open plan is chat-unfriendly, and when combined with hot-desking, it is fatal. Your neighbour will not only be someone you hardly know but will also probably be wearing headphones. Even if you tried to strike up a chat they would not be able to hear you.

Most offices have communal spaces where talking is meant to happen. But even these are unconducive to a delightfully meandering gossip because they are usually filled with people wearing lanyards having earnest meetings.

In these inhospitable surroundings dedicated chatters are being forced out. Every department used to have a couple of big personalities who did little else, but prevailing corporate culture requires that everyone behave in the same blandly beige way as everyone else. There is no place for the noisy.

It is not just that chat is discouraged, there is also less to chat about. No one has seen the same television programmes and, if people want other people to gawp at their holiday snaps, they do that on Facebook instead.

The biggest killer of chat is the most obvious of all – the internet. It allows us to skive while giving the appearance of being hard at work. Worse, it has made conversation obsolete. Email taught us long ago that it is easier to type out a message to someone sitting 10 yards away than to stagger out of our chairs and talk to them.

As chat was the main point of coming to the office, this is worse than worrying: it is a tragedy. Just to be sure, I called the person who had shown me around the media production company and asked if anyone ever chatted there. Of course they do, he replied. They chat all the time.

When I said I could not hear anything, he laughed at me pityingly, then said some of the saddest words I have ever heard: “We do it on Slack.”

1 Bank leaked my loan request to family who tried to rip me off
2 Eason acquires rival Dubray Books for undisclosed sum
3 Siblings who became ill next to wind farm settle case
4 Average weekly wage rose to €783 in final quarter of 2019
5 Solar panels: Are they worth the investment?
6 Can I see my father’s previous wills?
7 Ryanair and Aer Lingus monitor impact of coronavirus on travel to Italy
8 Fuel company loses €1.3m challenge over tax bill
9 What is at stake for Ireland in the new Brexit talks?
10 Accumulated profits at David McWilliams’ media company hits €675,000
Real news has value SUBSCRIBE