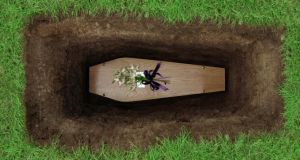 “The brutality of death is a disrupter of habit – it stops the living in their tracks.” Photograph: Getty Images

In November I wrote an article inciting people of a certain age to jack in their fancy jobs and join me in training to be a teacher at a tough London school. It was a tall order, but I hoped to rustle up enough interest for a small pilot project. A few dozen applications would have been decent. So far, Now Teach, the organisation I co-founded, has received nearly 800.

While sifting through them I have been looking for patterns, many of which are much as I expected – notably that the charms of the corporate world dwindle with time, while the desire to do something more useful gets stronger.

But there is one thing that has surprised me: the part played by death.

Last week, a prospective teacher told me that what did it for him was the funeral of someone he had been at business school with. This man had become a distinguished doctor who had done so much good in his life. His former classmate looked at his own achievements in marketing and in property and resolved to do better.

When my mother died 10 years earlier, I had entertained a brief teacher fantasy but it did not last and, within a couple of months, journalism seemed as charming as it had before.

Mostly, the death in question is that of a parent, and often the last remaining one. Becoming an orphan in your 50s seems to encourage all sorts of people to stop doing something comfortable (like being a partner in an accountancy firm) and apply to do something exhausting and possibly very uncomfortable indeed (like being a physics teacher).

I ought not to be surprised by this, given it is precisely what happened to me. In May, my father died. He was 90 and had had a good innings. A couple of days after his death I dragged myself into work, knowing that Dad would have disapproved of my malingering at home.

I remember listening to colleagues arguing over a headline and gawping at them with incredulity. Seriously? I thought. I could not imagine how intelligent, grown-up people could care so much about which of two almost identical sets of words was better.

At the end of that miserable first week, I told close friends I needed to do something different with my life, to which they all said the same thing: don’t. They pointed out that it would be mad to do anything rash when you are bereaved. This disconnected feeling, they warned, would not last.

I knew they were right about the last bit. When my mother died 10 years earlier, I had entertained a brief teacher fantasy but it did not last and, within a couple of months, journalism seemed as charming as it had before.

But when Dad died, I knew that waiting would be fatal. Within six weeks I had found a partner to help me set up Now Teach and a couple of weeks after that I had told the Financial Times about my plans.

Now that I discover my story is commonplace, I have been wondering what it is about death that is quite so galvanising. Most obviously, it forces you to ask yourself if you are doing what you really want to do. There is a cheesy trick practised by career coaches, in which they make you imagine your own eulogy. This has always struck me as too morbid and artificial to work, but the real death of someone you love makes you take stock, whether you want to or not.

Second, death tears into routine. Part of the reason people trundle along in the same jobs is because it is easier to keep doing them than to stop. The brutality of death is a disrupter of habit – it stops the living in their tracks.

Everyone says the death of both parents forces you to think: it is my turn soon. But for me the reverse has been true.

Becoming an orphan in late middle age can be liberating. It has made me more willing to take risks, with no parents to try to please or to care for in their declining years. With my children grown, I have fewer ties. So if I want to do something risky, there is no one to stop me.

The final point is about mortality. Everyone says the death of both parents forces you to think: it is my turn soon. But for me the reverse has been true. Given my father lived to 90, I will probably live longer still. I have just typed my details into an online life expectancy tool, which assures me that I will live until I am 94. “Thirty-seven years left!” it declared.

Instead of time being frighteningly short, it may be even more frighteningly long. What the death of my father has taught me is that in late middle age there is plenty of time to start all over again. – (Copyright The Financial Times Limited 2017)