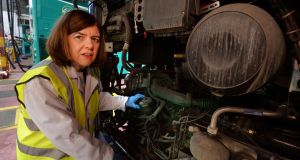 Marie Beegan, the first woman graduate from CIÉ’s heavy goods vehicle apprentice scheme in the 1980s, is encouraging more women to sign up for the scheme. Photograph: Cyril Byrne

The first woman graduate of the CIÉ heavy goods vehicle mechanic apprenticeship programme is urging other women to apply to this year’s scheme.

Marie Beegan graduated as an HGV mechanic from the four-year placement in 1984. She later worked for the CIÉ group and finally joined Dublin Bus in 1991.

She is encouraging other women to step into careers in mechanical professions by applying to apprenticeships such as these, which have traditionally seen a low level of women applicants.

Both Bus Éireann and Dublin Bus are now looking to recruit apprentice mechanics across Ireland. Beegan, who is now executive in charge at the Dublin Bus training centre in Phibsborough, says she especially enjoyed the social aspect and how the apprentices supported each other, making strong bonds.

“It’s a good few years ago now, but I still have friends that I made during my apprenticeship that I keep in touch with,” she says.

After graduating and working with a ferry company, Beegan joined CIÉ. She climbed the ranks at Dublin Bus, reaching depot administrator in Donnybrook depot.

In 2015 she made the move to Phibsborough, where she has five full-time staff and 18 part-time instructors. They train new drivers as well as providing periodic training for existing drivers on a daily basis.

“There are 2,500 drivers who all have to go through the training centre once a year anyway, never mind the new recruits,” she says.

It was widely reported last year that fewer than 1 per cent of State-sponsored apprenticeships were being taken up by women, with only 52 in State apprenticeship spots at the time against a total of 9,535 men; there were just five in mechanical schemes.

In January, Luas operator Transdev put out a call for more women applicants to drivers’ roles where only 4 per cent of drivers are women, or eight women among 180 drivers.

“It can be a daunting prospect to embark on a career in a male-dominated environment, but things are changing,” says Jen Kelly, founder of Women in Trades Network Ireland. “Where there may once have been resistance to women working in these roles, there is now support. We know from examples here and overseas that women are exceptional in these jobs.

“These jobs are great for women. They say that such professions provide them with an improved quality of life through a solid wage and the skills they can use in and out of work.”

Applications for the programme close on April 15th with the successful candidates starting their apprenticeship in the autumn at centres in Dublin, Cork, Waterford, Rosslare, Stranorlar, Ballina, Limerick, Thurles, Tralee, Galway, Athlone and Longford.