Lucy Kellaway: Why do we tolerate Buffett’s lame, sexist ‘jokes’? 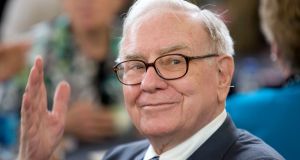 Warren Buffett: “Either he should get in touch with modern ways or he should retire.” Photographer: Andrew Harrer/Bloomberg News

When Warren Buffett was interviewed on CNBC last week about Unilever’s rejection of a bid from Kraft, he told a funny story. Or rather, he told a story he thought funny. He looked at the young woman doing the interview and asked if she knew the difference between a diplomat and a lady. No, Becky Quick replied.

The camera angle broadened to take in the face of the interviewer, who was staring at him in horror with her mouth locked into a smile. The joke was not funny. Even in the universe of unfunny sexist jokes this one was particularly crass.

On Twitter, the global breeding ground for easy moral outrage, very few people seemed to care that the man who runs one of the largest and most respected companies in the world had just told a joke that could be construed as making light of rape

Yet Mr Buffett got away with it. Most newspapers (including this one) did not see fit to mention his ill-advised pleasantry. Fortune magazine merely referred to the “strange analogy” that he had used to explain the response of Unilever to the bid. On Twitter, the global breeding ground for easy moral outrage, very few people seemed to care that the man who runs one of the largest and most respected companies in the world had just told a joke that could be construed as making light of rape. A couple of people tweeted that Warren Buffett was a chauvinist pig, but that was about it.

Five years ago, Sebastián Piñera, then president of Chile, made the same unfunny joke – only then all hell broke loose. The story was picked up by the BBC. Politicians queued up to denounce him, calling the joke “sexist and prehistoric”. One of them said Mr Piñera had brought shame on the nation and put back the cause of women by two decades.

Lesser transgressions have landed people in an even bigger pickle. When Sir Tim Hunt, the Nobel Prize-winning scientist, said the trouble with having girls in labs was that you fell in love with them and they cried when criticised, he was made to resign. As was Kevin Roberts of Saatchi& Saatchi when he said there was no longer a problem with gender diversity in advertising. So why was Mr Buffett allowed to get away with it?

It could be that the bar for unacceptable tastelessness in the US has just got a lot higher. By comparison with what other prominent old men have been saying recently, Mr Buffett’s joke looks tame. Set against Donald Trump’s assertion that “If Ivanka weren’t my daughter, perhaps I’d be dating her,” it hardly seems creepy at all.

Or it could be that we forgive the Sage of Omaha because he is 86. He grew up in a different time, when sexism had not yet been invented. No doubt the young Buffett and his friends often innocently joked with one another that a “lady’s” no meant maybe, without anyone seeing any harm in it.

Yet this excuse will not do. Age is only a defence for oldies in their dotage. When your ancient uncle from the comfort of his Bath chair says something sexist or racist it is perfectly reasonable to let it go, on the grounds that he is out of the swing of it, that little is to be gained from correcting him, and often much to be lost from making him upset.

But it is not like that with Mr Buffett. He is a public figure whose folksy language is often held up as an example. He controls an unconscionable amount of money – his Berkshire Hathaway fund is worth about $450billon. If he is out of touch with modern ways it matters very much indeed. Either he should get in touch, or he should retire.

We are all so invested in his cuddly, homespun persona, and so revere his judgment that when he starts making hideous sexist jokes, there is only one thing for it.

But I suspect the true reason we forgive Mr Buffett is the most inexcusable of all. It is simply because he is Warren Buffett. I can think of no business leader who has been so worshipped for quite so long, ever, anywhere, with the possible exception of Joseph Rowntree and George Cadbury, both of whom went on being adored into their 80s.

People feel they need Mr Buffett, now more than ever. We are all so invested in his cuddly, homespun persona, and so revere his judgment that when he starts making hideous sexist jokes, there is only one thing for it. To pretend we have not heard.