Codes of conduct are corporate weapons that can backfire 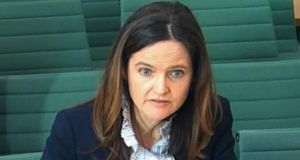 “Charlotte Hogg, who helped write the Bank of England’s code, still managed to get tripped up by it and this month had to resign as deputy governor.” Photograph: AFP/Getty Images

I am in breach of my employer’s code of conduct. I have broken it in not one but in four ways, one of which involved barefaced lying.

The normal thing would be to keep quiet about this, but I am choosing to shop myself, partly because I have reason to believe I am in good company but also because the real wrongdoing was not done by me, but by the codes themselves – which breach the principles of common sense, human motivation, and snappy writing.

Codes of conduct are scary things. Charlotte Hogg, who helped write the Bank of England’s code, and is also an adviser to my charity, still managed to get tripped up by it and this month had to resign as deputy governor.

Seeing what happened to her, I decided to do something I had never done before: settle down to read my own.

The first thing the Financial Times’s corporate code of conduct demands is that employees “act in a professional, honest and ethical manner” – which is fine, if a little general. But by the second bullet point I had already come a cropper: “Be familiar with the information contained in this code,” it orders.

In my defence I have tried to read it on various occasions in past years but I am a slow reader and nine pages of dull text is a bit much.

This does not make me an outlier. It makes me just like most humans, who are not naturally drawn to the small print on health-and-safety policies.

In the past week I have asked everyone I have met if they have read their employers’ codes of conduct. The majority either said no or looked sheepish and said they had skimmed it. Some claimed to have read theirs, but when asked what it contained could do no better than: “Oh, you know: the usual stuff.”

This means every year, millions of wage slaves – including me – commit another violation and perjure themselves by ticking a box claiming to have read, understood and committed to complying with the code, when they have done nothing of the sort.

The next breach concerns my obligation to report any colleague who is not following the code. I know for a fact that a certain FT journalist has not read it properly either, in which case I am again at fault for not shopping him.

But to grass up a person for something so tiny would interfere with my own ethical principle of not sneaking on a friend, especially one who is a fine, upstanding journalist. So what should I do? On this, as on every tricky, real-life dilemma, a code of conduct is of no help at all.

As for the rest of the code, it is perfectly sensible in a general sort of way. Alas I fear the state of my desk may not be 100 per cent compliant with fire regulations, and I see I have an obligation “to read, understand and abide by our Treasury Policy, Travel and Expenses Policy and Data Retention and Destruction Policy” – which saps the spirits no end.

Yet by comparison to most other codes, the FT’s is a work of brevity and precision. At my alma mater, JPMorgan, the new code runs to 50 pages, beginning with a picture of Jamie Dimon smiling angelically and staring into the middle distance. There are further pictures of happy women and black people, as well as one of employees throwing buckets of water over each others’ heads. How the last relates to the commandment that all JPMorgan staff treat each other with dignity, it does not say.

The report is an interminable mish-mash of important things and trivial ones – of strict regulations on money laundering and vague waffle about being a good global citizen. Which is nonsensical in a code of conduct. What does it mean? And what business is it of the bank’s?

I would rather a code that came without the pictures, the values and the cloying letter from the chief executive, but with a simple list of clear commandments. A reasonable start might be: don’t do anything illegal. Don’t do anything that fails the Private Eye test – would it look ugly if published in the satirical magazine? Don’t do anything that you would be ashamed to tell your colleagues about.

The trouble with this is that it misses what a code of conduct is really for – part PR exercise, part excuse for firing anyone who a manager deems to have violated it. Sometimes, as the Bank of England has found out, the trap catches the wrong person. – (Copyright The Financial Times Limited 2017)

1 Hugo MacNeill steps back from Goldman Sachs role
2 Should AIB compensate me for upsetting letter on arrears?
3 Irish company paid €1.2m a year by collapsed Blumenthal-linked Australian restaurant
4 Why bosses should not be afraid of speaking out on Instagram
5 Poll on second election, concerns over Irish pension gap, and Ireland’s rich list
6 ‘I wouldn’t be a big saver. I tend to buy now and repent at leisure!’
7 Clean energy’s dirty little secret on wind turbines
8 Tax shifts won’t drive multinationals out of Ireland - Moody’s
9 North’s consumers will be ‘hardest hit’ if UK fails to secure EU deal
10 Irish economy to grow by 3.4% this year, predicts EY
Real news has value SUBSCRIBE