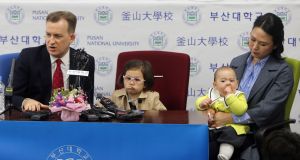 Prof Robert Kelly with his wife, Kim Jung-a, and their children Marion (4) and eight-month-old James, at a press conference after a video of the children crashing Prof Kelly’s Skype interview with the BBC went viral. Photograph: EPA

It ought not to have been especially interesting. All that happened was a man sat in his study at home in South Korea and did a live Skype interview for the BBC. His young children wandered into the room behind him, appeared in the frame for a few seconds until a woman rounded them up, and the interview continued.

Yet the video of this minor domestic mishap in the home of academic Robert Kelly has been watched more than 100 million times all over the world, causing much amusement, squirming and comment. For a couple of days the Kelly family became one of the most famous on earth. When the Wall Street Journal landed the first post-mishap interview last week, the resulting piece was the normally serious business publication’s most-read story online.

Mr Kelly’s case was extreme because he was on live telly wearing a suit and tie, adopting the gravitas we demand of experts. Nothing could be less grave than a child in a yellow jumper gleefully hopping behind him: indeed the very sight of his kids lurching into view was as much a faux pas as if he had suddenly appeared in front of the camera stark naked.

The chasm between the two worlds played out on his face. At first, he wore the mask required by his job. He was the expert, all seriousness and authority. Then the mask slipped to reveal a quite different person, an exasperated father giving his daughter an indulgent smile. Then, after more embarrassed consternation, he just about managed to get his work mask back on.

Toddlers on the rampage

Yet despite these evident truths, the latest management fad – possibly the daftest ever invented – is to encourage managers to behave like young children. Last week Swatch published its 2016 annual report with the theme “Now we are Six”. It used photographs of all its directors as six-year-olds – an excellent idea visually because they were all considerably easier on the eye back then, but otherwise baffling. The opening message from the chair is about the joy of building sand castles, which is all fine and dandy but most unlikely to distract even the laziest investor from the fact that in 2016 the watchmaker made about half of what it had made the previous year. Unless the point was to explain that the company had done so badly because its directors were otherwise engaged with buckets and spades.

Little Wins: the Huge Power of Thinking like a ToddlerRichard Branson

Growing down, explains the book’s author, Paul Lindley, is a great idea for managers, as they become confident, creative, honest, fun and never give up.

These traits ring few bells from my memory of toddlers, though I can think of some other ways in which three-year olds resemble senior executives - all of which are better avoided. Toddlers have tantrums. They are very bad at sharing. They do not listen. Common sense is not a strong point. They are extremely selfish and view other people as objects. And they are no good at all at working out profit margins.

The behaviour traits exhibited by the Kelly children consisted of skipping, hopping and staggering around in a baby walker - none of which strike me as worth emulating by managers. The main point about such activities is they are better carried out in a room where BBC interviews, or serious work of any sort, are not being conducted.