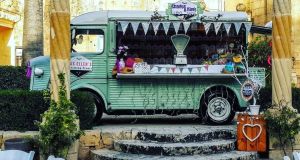 It can often be a road less travelled, the decision to bring your product to the people rather than the other way around. But for one Irish entrepreneur, it was something she feels only sweetened her success, although the journey did come with a few bumps along the way.

“Keeping chocolate from melting in 40-degree heat was one of the first challenges of working with a food truck and not one I had fully thought through when I decided to set up my company,” laughs Sarah McGourty, co-owner of Miss Ellen’s Sweet Shop and Sweet Truck in Malta.

McGourty moved to Malta from Boho, Fermanagh four years ago but not with the intention of setting up her own business.

“I had been studying hotel management in GMIT and working in Neven Maguire’s restaurant, but I needed to get some work experience. I first came to Malta in 2009 to work in the Phoenicia Hotel in Valletta, which at that time was owned by Irish developer Paddy Kelly, hotelier Ray Byrne and four others. I worked here for a while and then went home to finish my degree.

While I was figuring out whether to stay in the hotel industry or not, my mother happened to read an article in a Sunday newspaper which said old-style sweet shops were making a comeback in Ireland. She thought it would be a good idea to try it out in Malta as the Maltese have a very sweet tooth. I wasn’t so sure at the time, but now here I am.”

McGourty and her businesses partner, Sandro Grech, have been up and running since January 2014 and have expanded Miss Ellen’s to include party events and decor. They also sell their sweets online.

The original idea was just to have a van, which they bought and named Henri. But it took months of negotiating with Maltese authorities to get it registered and on the road, so they ended up parking Henri in a garage and operating from there. And that was how their shop was born.

“Ironically, when we couldn’t have the van on the road, it led to us having a sweet shop and the van part came later.”

Both the shop and Henri operate six days a week, although, in Henri’s case, logistics can sometimes get in the way. “Being mobile is great as it’s a free-roaming advertisement, but there are also a lot of challenges, which include parking, parking and parking!” says McGourty.

“We always have to plan ahead. Finding the ideal spot to base ourselves for a full day is not easy. You also have to consider running costs like fuel and electricity and you need to have your own [power] source with you at all times.”

And then there’s the maintenance of Henri himself – a 1954 Citroen H van.

“The fact that he is mobile means you can bring him to clients, so we can use him for weddings, baby showers, corporate events or birthdays and, compared to the shop, the running costs are lower. But from a negative point of view, he’s more than 60 years old so it can cost a lot to keep him in working order. Sometimes if he breaks down, we must wait weeks to get him fixed again, which means we are losing money while he’s off the road.”

Having a novelty addition to the business gives McGourty plenty of fodder for social media.

“We mainly use Instagram to let people know where Henri will be every day, but it also helps show off what we have available in the shop as well as give people an idea of the types of events we can cater for.”

Instagram also allows her to advertise her large range of products to the Maltese and the growing expat community. Customer favourites include Vegemite, Swedish Fish and Reese’s Pieces.

Looking back at that conversation she had with her mother, does McGourty believe setting up a business in Malta is easier than it might have been if she had decided to stay in Ireland?

“Probably not,” she says. “Certain aspects are harder here, simply because there is no communication between departments or local councils. For example, when it came to the address of my shop, it borders two places called Santa Venera and Hamrun. So, when I was trying to get information or documentation, both offices were sending me back and forth between each other.

“The banks are also very frustrating. I had huge problems with the state-run Bank of Valletta simply trying to open an account to put money in. I was told it was illegal to hold two different bank accounts in two different countries. As someone from Northern Ireland who holds three different accounts, I know this was not true.

“Registering the van was also a headache and it ended up with me having to send solicitors’ letters to get things moving. I feel that, in Ireland, you would have more information and more help if you were setting up a small business. There are greater initiatives by the government and more of an emphasis on getting women into business.”

But of course, there are some positives. “Competition isn’t very high in Malta with what I do. In Ireland, I would never be able to compete with the larger department stores, but here I can.

“There also isn’t the same drive in Malta when it comes to healthy eating, so they still spend a lot of money on sweets, which is a good thing for me!”

And how has McGourty evolved her model to deal with that melting chocolate in summer? “We usually put it in cool boxes until around May and then have to bring it inside for the hotter months I’m afraid.”