Brexit Proof Q&A: ‘Everything in business has, largely, stagnated’ 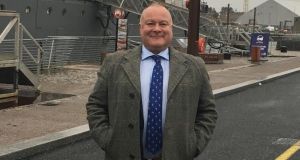 Belfast-based Glenn Bradley is the corporate head of global supply for Hardscape Group which specialises in sourcing natural stone and eco-friendly man-made products for use in public and private construction projects. The company employs more than 60 staff at offices in Ireland and Britain with supply chains employing thousands of people across the globe.

Q. What was your reaction when you heard the UK had voted to leave the EU?
A. I was surprised, if I’m honest, disappointed and later frustrated. With hindsight, I believe the Remain campaign became complacent and did not constructively challenge the misinformation, nay, outright deceits, prevailing at the time.

Q. How is your business likely to be affected?
A. We are losing business in the EU because we could not offer contractual assurances on our supply chains post [the original] March 29th [Brexit date] which is now revised to October 31st. To date, I’d say the non-information and lack of political leadership around Brexit has lost our company €1.1 million in sales. And we’re an SME, so what are larger companies losing? Everything in business has, largely, stagnated with huge fear regarding the scale of damage that tumbling out with no deal or World Trade Organisation tariffs will cause to a great many companies. There has been a fundamental failure by politicians to comprehend business functionality. A no deal or WTO tariff Brexit will have a disastrous impact on our company.

Q. How much do you rely on exports or the supply of materials across the Border?
A. We import. The Irish operation of Hardscape trades across Ireland and around 60 per cent of our sales would be to public-realm projects in the Republic where we already are facing the impact of Brexit because we cannot meet certain contractual conditions. It’s not our fault as a business that we cannot meet those supply chain caveats: it is a political failure by the UK government and its DUP allies. They risk the livelihoods, wellbeing and quality of life of, not just our staff but a very great many workers across various industry sectors throughout Britain and Ireland.

Q. When did you begin preparing for Brexit and what contingency plans have you put in place so far?
A. Our preparations started before the referendum result came in at all, with contingency planning, but that was based on a political solution that enabled an amicable withdrawal from the EU that respected the Good Friday Agreement (GFA) and global trading practicalities and, or, treaties. The Conservative/DUP strategy has been to disregard the GFA entirely and rip apart pragmatism regarding trading realities in the world. As such and like many companies we are in limbo.

Q. Are you examining new markets/suppliers and, if so, how practical is that?
A. Brexit or not, we will always explore and drive innovation in our market.

Q. Does Brexit present any opportunities for your business?
A. No. I can see how, with political leadership, Northern Ireland plc could have been creating jobs and enhancing the wellbeing of people through an agreed trading alignment. A huge opportunity is being lost to help lift communities out of poverty as a result of Northern Ireland not being exploited as a UK and European portal.

Q. When do you expect to be Brexit-ready?
A. Given the political instability and unknowns, we are as ready as we can be.

Q. What’s your best- or worst-case scenario?
A. A deal is essential and thus best. A deal encompassing the Good Friday Agreement and trading realities even better. Worse case scenario is no deal and WTO tariffs, a hard Brexit. If Brexit must proceed then a managed exit is essential. A crash out of the EU could drive us out of business, destroying livelihoods and it is unfortunate that some politicians are actively working to that disaster.

Q. Are you stockpiling goods or raw materials?
A. We have brought in extra stocks of quarry block and standardised modules of material just in case.

Q. How might the Irish or British governments, or the EU help ease the pain of Brexit for your company or sector?
A. That’s difficult because it centres around a managed Brexit or a no-deal Brexit. The hubris and pomposity needs to end. We are in a scenario where the potential future prime minister of the UK exclaimed “f**k business” in regard to legitimate concerns raised by CBI and the institute of directors. Business requires certainties and cohesiveness. It is essential that the conversation becomes grounded in reality of the practicalities of world trade and commerce, respecting supply chains and the population’s need.

Q. How do you think the Irish/British (or both) governments has handled the Brexit negotiations?
A. I’m unsure what more the Irish Government could be doing – possibly reminding the UK of its obligations under the international treaty that is the Good Friday Agreement regarding citizens’ rights? I think the UK has completely mismanaged negotiations because the Conservative party is at civil war. Most of what is happening is not about the UK or indeed the EU but about power in a party torn apart by internal selfish factions.

Q. Looking out five years, how do you think your business or industry will have changed as a result of Brexit?
A. We are passionate, innovative optimists. Brexit is unwelcome and the political hubris around it has created a soul destroying, life sapping drain on most companies presently. We want certainty (in as much as can be given) and for relations to get on an even keel again. I think Brexit will come to serve as a warning for the future.

1 What is Covid Tracker Ireland? The HSE’s new app explained
2 British holiday home rental company exits Irish market
3 Ireland’s economy forecast to shrink 8.5% due to Covid-19 pandemic
4 Will family’s tax debt stop me getting my inheritance?
5 Why gift a son now if it eats into his tax-free inheritance threshold?
6 TikTok to quit Hong Kong mobile market ‘within days’
7 How to save money while helping to save the planet
8 Poverty could afflict more than one-in-five children in State by year end
9 Central Bank governor to call for ‘credible’ path’ to cut State debt post-Covid-19
10 Big Four told to outline plans for audit split in UK by October
Real news has value SUBSCRIBE