Pilita Clark: A planned global action in September will test corporate resolve on the issue 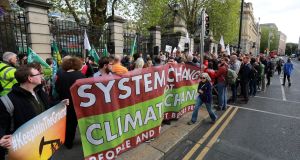 Which company should you work for if you care a lot about climate change? Which should you avoid? Until now it has been hard to tell, unless you have time to plough through company statements to see which business is doing what to cut carbon emissions. Likewise, figuring out how a company deals with employees who want greener action has been tricky.

It is about to get much easier. On September 20th, workers are being urged to join a global climate strike, the latest sign of widening unrest about the problem. Organisers say they hope people will walk out of offices on to the streets. For those who would face the sack or cannot take leave, the idea is to do something relevant, such as calling a meeting to discuss company climate plans or holding a brief stoppage.

The move is aimed at backing the thousands of school students who have been striking over climate change in the past year. More than 4,000 potential organisers in 121 countries are said to be ready to help.

There is no way of knowing how many adults will down tools or take any action at all, but it is clear such protest poses a new dilemma to many employers. Few large businesses question the existence or importance of climate change. Many agree it is “one of the most significant environmental challenges of the 21st century” (Goldman Sachs) and the risks “warrant action” (ExxonMobil) so we must act “before it’s too late” (Facebook).

This concern may be genuine or it may be spurred by a need to lure socially-minded workers in a tight labour market. But either way, is it deep enough to overlook the loss of labour to a climate protest? To find out, I emailed a dozen global companies two weeks ago to ask what they thought of the planned action and how they might treat any employees taking part. Would they dock the pay of a striking worker? What was their policy on employees joining public protests and would it apply in this case?

Apple and Amazon both said they were tackling emissions, but neither addressed the climate strike

The companies were chosen at random from several different sectors. I make no claim for scientific rigour but the results are still revealing. At one end of the spectrum there is Patagonia, the outdoor gear company founded by rock-climbing environmentalist Yvon Chouinard. It said it actively encourages its employees to take part in environmental protests and has a global policy of providing bail for workers arrested during such actions. In September it plans to expand digital efforts to connect customers with local green groups.

Meanwhile, Germany’s GLS ethical bank, which finances environmental and social ventures, says it will close on September 20 so all employees can march “against the climate catastrophe”. What of much larger companies founded by eco-billionaires such as Michael Bloomberg and Richard Branson? Bloomberg declined to comment. Sir Richard’s Virgin Group said it was still “gathering views” on the climate strike. So is Ikea, a big renewables investor. Its parent, Ingka Group, said it had no global policy on workers joining protests but was “exploring” with its far-flung teams “what our approach will be on the upcoming climate strikes”.

Of the energy companies I contacted, Shell said it backed peaceful protest and its employees could seek leave to join such action. I did not hear back by deadline from BP or ExxonMobil. Nor the investment behemoth BlackRock, whose chief executive, Larry Fink, thinks companies must make a positive contribution to society to prosper.

Finally, there were the big tech companies at the sharp end of recent employee activism. Facebook declined to comment. I heard nothing from Google. Apple and Amazon both said they were tackling emissions, but neither addressed the climate strike.

By September 20th this may change, at least at Amazon. Nearly 8,000 Amazon employees have put their names to a letter urging the company to produce more comprehensive climate plans and rethink products such as machine-learning services to boost oil companies’ extraction of fossil fuels.

After a shareholder resolution on these aims failed to pass this year, some employees are now considering what they will do on the day of the climate strike. I doubt they will be alone. – Copyright The Financial Times Limited 2019