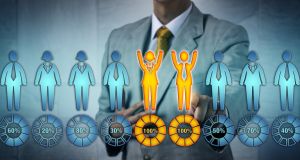 It took a while for technology to make its way into the hiring process but, over the last decade, tech solutions such as game-based assessment have caught on. But while games might seem cool, they are no substitute for science-based assessment says Eric Sydell, vice-president for innovation at international virtual hiring platform, Modern Hire.

Sydell is not against the use of gaming in hiring. In the right tight context, such as interviewing someone for a role that demands specialist skills, they have a part to play, he says. However, he believes their use should be limited and specifically linked to job relevance.

“Gamification takes elements from games and uses them in other contexts. It’s a trend not just in hiring but in a lot of technology applications and it can add a level of value and interest to a software application that otherwise might be somewhat dry and boring.

“But we need to distinguish between this, which is okay, and the sort of complete games that companies are using in the hiring process.

“One of the main distinguishing features of a good game is that it’s fun and most of the games being used in the HR space fail on that criteria,” he adds. “It sounds like a great idea but, in practice, it falls down as there’s a mismatch between the idea of a game and the job application process which is very serious and inherently stressful for people.

“As a psychologist, I find it somewhat demeaning and dehumanising to suggest that someone can play a fun game and apply for a job at the same time.”

The evolution of HR technology has happened very quickly with new ideas coming thick and fast. Games have made a particularly big splash not least because it was assumed that a technique that mirrored the consumer-facing technology candidates were used to in their personal lives would be well accepted. For early adopters, games appeared to tick two boxes by making recruitment more “fun” while also providing predictive data about which candidates would do the job best.

“Now that time has moved on, it has become clear that it’s not the ultimate hiring solution,” Sydell says. “Games may have a small predictive relationship with job performance, or with certain jobs where something is being measured in a very precise way. What games don’t measure is someone’s ability to fit into a team, to be persuasive, to work with a certain personality type or to be conscientious which is a big predictor of job performance.

“There’s a much broader range of job competencies that need to be measured to make a good hire. Games are far too narrow.

“For over 20 years at Modern Hire, we have been building virtual experiences into our hiring approach [which includes gamified elements], collecting data and validating that data’s relationship with job performance scientifically. So, we are not saying that gamification in itself is bad, but it has to be realistic, job-related and preferably used to give candidates an insight into the job and whether it’s right for them.”

Sydell says that another tech-related trend has seen companies begin scraping social media data for hiring purposes. “This has not been shown, by any rigorous research, to have any predictive value yet. In fact, a recent study has shown that social media is useless in the hiring process. All of these things tend to be driven more by marketing hype than science,” he says.

Prof Peter Cappelli, director of the Centre for Human Resources at the Wharton business school at the University of Pennsylvania, also takes issue with social media scraping.

Writing in the Harvard Business Review, Cappelli says: “Whether companies should be examining social media content in relation to hiring or any other employment action is a challenging ethical question. On one hand, the information is essentially public and may reveal relevant information. On the other hand, it is invasive, and candidates are rarely asked for permission to scrutinise their information.”

Cappelli says that hiring has been turned on its head. It used to be that candidates applied for jobs. Today, people are more likely to be approached by a recruiter who sounds them out on a possible move. He adds that employers are obsessed with new hiring technologies and driving down recruitment costs which defeats the purpose of trying to find the best candidate for the job.

He talks about “a new industry of vendors [that] offer an astonishing array of smart-sounding tools that claim to predict who will be a good hire ... they use voice recognition, body language, clues on social media, and especially machine learning algorithms – everything but tea leaves. The big problem with all these new practices is that we don’t know whether they actually produce satisfactory hires.”

Sydell says that “less headline grabbing” but scientifically evaluated assessment tools, such as psychology, other forms of HR tech and data science are a more reliable and fairer predictor [to all classes of applicants] of how well someone will fit into a role.

“It just can’t be summarised in a game. That’s a gross simplification of reality,” he says.