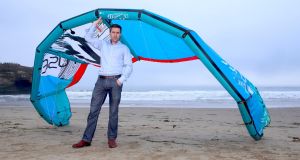 From kitesurfing camps to driverless cars, Philip McNamara has had his finger in many an exciting pie since moving to the land of coding, milk and honey in 2010.

“Like most people who came to Silicon Valley before me, I wanted to be the next tech billionaire,” he says. “I liken it to Hollywood for coders. Slightly less glamorous, but there’s a chance you could change the way people live their daily life if you tap into the right thing.”

Despite his aspirations, things didn’t work out quite as planned when McNamara first arrived. “I wanted to pitch a platform that scans barcodes from products and tells you where you can buy them. Essentially it would eliminate the process of going to a shop only to find it’s been sold out,” he says.

“I spent two years fine-tuning the product, thinking it would be a hit with retailers, but they didn’t want to give away their data,” he says.

He took a job as vice-president of business development US at Voxpro, an Irish multilingual business process outsourcing provider, which delivers customer contact solutions for more than 300 companies and organisations, ranging from local enterprises to multinational corporations in 2013. Clients include Airbnb, Google Cloud and Stripe.

When McNamara started, the company had 200 staff. Now there are 2,700 people working at the Cork headquarters of the business and at offices in Dublin, Bucharest and in San Francisco and Georgia in the US. In August, the company was acquired by Canada’s Telus International in a deal understood to be worth around $150 million.

“The acquisition accelerates our plans and will enable us to keep growing at the same scale as a lot of the partners we work with in the tech industry,” he says.

Because Voxpro has offices in Ireland, McNamara comes home at least four times a year. “That way I never get a chance to get homesick, which is great.”

Originally from Galway, he has a background in software engineering. McNamara studied at Galway and Sligo IT, before completing a masters in the science of marketing from KU Leuven in Belgium. He speaks some Dutch and Spanish.

“I co-founded four companies in Ireland, Britain and the US, including Inspire Nation, an international consulting company, which boasted the World Bank and Virgin Atlantic as clients. I also work with companies, helping them to expand internationally, especially into the Silicon Valley ecosystem,” he says.

McNamara was a keen kitesurfer before he arrived in the US and when he first moved to Santa Cruz on the Pacific Coast, he was able to go kitesurfing every day.

That love of kitesurfing was soon to become part of his business life after he came across a kitesurfing camp for entrepreneurs called Mai Tai, which hosted events across the globe in places including the Easter Islands, Richard Branson’s Necker Island and Hawaii.

“I was so inspired after an event in Hawaii, that I decided to create a kitesurfing event, where I got CEOs and venture capitalists together on Achill Island in 2013,” he says. “I received sponsorship from Silicon Valley Bank, the IDA and Fáilte Ireland. I’m hoping to something similar again soon,” he says.

McNamara, who is currently working with Ford, Porsche, Mercedes Benz and Tesla on putting together a conference on self-driving cars advises Irish people thinking of locating to Silicon Valley to do their homework.

“There’s no recipe for success. Competition is fierce over here and you have to be on top of your game, before you arrive. Luckily there are lots of networking opportunities here, especially within the Irish community.”

If you have a good product and you’re good at coding, there is a place for you. “Silicon Valley is always open to new ideas. Investors are always looking for the next best thing, and Irish people have enjoyed some great successes over here.”

A keen mountain biker, ski instructor and sailor, he says life in California is great, but you need money.

“Of course there are opportunities here, but it is expensive. I’m lucky in that I already had a green card from working here in 1999, so that process was eliminated. But you can still get sponsored in Silicon Valley. The average salary is $100,000 plus, but a two-bedroom apartment in San Francisco costs €5,000 a month. It’s not cheap here.”

The Irish community in Silicon Valley is very strong and supportive.

“There are fantastic networks people can be part of, so it’s important to show up at events and meet people. If I were to give advice to people thinking of coming over here, it’s to build a good team. Companies buy teams over here, not solo founders,” he says.

“Having a great CTO [chief technology officer] or being one is crucial, no matter what. Also learn to code, if you don’t, get someone who does. That’s what it’s all about here.”

And, if you get a good offer, take it, he advises. “Don’t wait around for your company to grow to a certain size. Things move quickly here and you could miss out.”