After succeeding as a high-flying stockbroker in San Francisco, Fiachra O’Sullivan made a career change to relationship expert and therapist 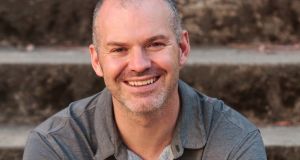 Fiachra ‘Figs’ O’Sullivan: ‘I find it easy to accept my success here in America. I find Americans to be cheerleaders. They cheer you on’

Fiachra “Figs” O’Sullivan grew up in Old Bawn in Tallaght in Dublin. “I’ve met lots of guys named Fiachra, my age, who are nicked-named “Figs”. I think its because Jacobs ran a huge ad campaign when I was young about “how do they get the figs into the fig roll?”. It was everywhere and the kids in my neighbourhood started calling me Figs!”

When O’Sullivan was 12, his family moved to Rathmines and he went to Stratford College.

“I remember the principal of the school called my parents in for a meeting because he said I needed to change my accent as it wasn’t appropriate for the school. It made me very aware of the class conscious set-up in Ireland and I felt at a loss to know where I fit.”

After graduating from Trinity with a degree in Business, Economics and Sociology, O’Sullivan moved to San Francisco.

“I always wanted to be in the first percentile for money made and I usually was but I lived in fear of being told one day that I had lost a lot of money for a client.”

Following his time at Merrill, O’Sullivan became a specialist in employee stock options for dot-com businesses.

“I helped a lot of the first Silicon Valley companies to develop their employee stock options. I worked with companies like, Citi Group, Smith Barney, Google, etc.”

However, from a young age, he always knew he would end up helping people.

“I always thought I’ll make money first and then do what I want to do in the world. My work in the financial sector was driven out of insecurity and it didn’t make me feel any better.”

When the dot-com bubble burst and 9/11 happened, O’Sullivan took the opportunity to move out of the financial world and he relocated to a remote part of California outside of Big Sur.

“I lived in Esalen. The Esalen Institute is a centre which was the birthplace of the human potential movement. I studied about myself there for a year and a half working with the healers, therapists and teachers I met there. I became involved in improvisational dance and theatre and the experiences I had there really laid the foundations for me becoming a therapist myself.”

By the time he turned 38, O’Sullivan says his second career as a relationship expert and therapist had finally allowed him to feel like he has found his place.

“I remember, during my training, I was volunteering in a centre helping people with their relationships and I had never felt so happy. I loved it so much. In my financial career, I had helped make a lot of rich people even richer. Now I help people love each other. It feels great.”

However, O’Sullivan’s grounding in business never left him and, after establishing himself as one of San Francisco’s most sought-after couples’ therapists, he has developed a digital brand Empathi. com.

“I realised that my therapy practice isn’t scalable in terms of impact or financially so I created Empathi.com in order to bring the wisdom of the therapies and psychotherapy practices I use to a much greater population”.

O’Sullivan launched the app Empathi earlier this year and found he had 6,000 subscribers in the first two months.

“That was our beta launch. We closed the subscriptions after that so we could re-assess what works and what people want and we are opening up for subscriptions again.”

Empathi.com allows users to take online self-assessments and courses. There are podcasts and live access to O’Sullivan at certain times.

“Working in finance in the US in the 1990s, I had the best sales training in the world. I built up my experience in business development, sales and marketing and now I’m applying what I learned in my first career to a business I believe in and I’m passionate about.”

While there are some other apps available to help couples with their relationships, O’Sullivan has created a way for couples to access what he says are the very latest science and clinically proven psychotherapeutic relationship therapies.

“I spent my time in the financial world trying to avoid my shame and feelings of unworthiness. Now I have successfully developed a unique online start-up that has been led by my vulnerabilities,” says O’Sullivan.

“By far my greatest success is being a husband to Teale and father to Grace and Kian. My wife Teale is also a couples therapist and we do a very un-Irish thing, we air our dirty laundry in public! We will sometimes do a joint podcast where we will discuss our own relationship issues and how we work through them. So, we do this work ourselves. We walk the walk!”

“It’s funny because I find it easy to accept my success here in America. I find Americans to be cheerleaders. They cheer you on. But there is still the fear that, in Ireland, people would be saying ‘who does yer man think he is?’”