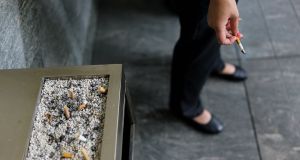 Smokers who are offered cash incentives are far more likely to give up cigarettes than those who are simply offered tips on how to quit, said a US study. Photograph: Chandan KHANNACHANDAN KHANNA/AFP/Getty Images

Non-smokers could be lighting up with joy at the thoughts of an extra six days holidays if an initiative launched by one Japanese company was to win favour here.

Back in September Piala, a marketing firm based in Tokyo, said it would give non-smoking employees an extra six days of paid holidays, to make up for the time taken by their smoking colleagues.

Smoking remains popular in Japan, with more than one in five of the adult population smoking, while the rate is higher among older workers. At Piala, it was estimated that each smoking break took a worker 15 minutes as their office is located on the 29th floor of an office block in the Ebisu district of Tokyo. The company recently indicated that so far, 30 of the company’s employees have taken additional leave since the measure was introduced.

Now an Irish pyschologist wants companies here to follow suit, noting that on average a smoker will work one month less a year then a non smoker due to smoke breaks. And there are still plenty of smokers; 27 per cent of adults are still lighting up according to a 2015 survey, one of the highest rates in the world.

“As the country that introduced the smoking ban we should encourage Irish based companies to do the same,” said Jason O’Callaghan from The D4 Clinic Blackrock, arguing that allowing smokers take breaks “adds up to massive waste of money for the companies and a severe drop in productivity”.

It would also lead to a healthier workforce, “as each smoker who quits would win back a month of working hours”.