Wild Geese: I went from being a storyteller to being an activist! 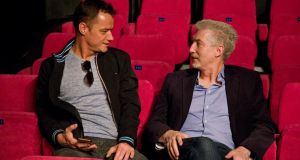 Rory O’Neill (aka Panti Bliss) with Garret Kelly ahead of a performance at the Sarajevo Irish Festival. Photograph: Nerma Sofic

* When asked how Garret Kelly would like to be referred to in this piece, he says, “I usually say I’m a social entrepreneur but recently I was referred to as an impresario.” Kelly was born in Ireland and, as a student, had ambitions of becoming a documentary film-maker.

“I phoned the BBC and I asked them what course should I do in college to become a documentary film maker and they told me ‘do something very broad like an Arts degree and then we’ll train you to be a producer’. So that’s what I did.”

However, during his years in University College Dublin, Kelly became involved in a number of student social movements.

“We were involved in a number of social activist movements, for example an initiative which later became the Green St Trust. We were advocating for people to be living in city centres at a time when the government wanted to build roads through the city. I went from being a storyteller to being an activist!” he says.

After college, an opportunity opened up to be an election observer in South Africa during the elections and, from there, he went on to do election work in Bosnia.

“That’s what brought me into the region,” he says, “and, since April this year, I’ve been here 20 years.”

Kelly spent over three years in Bosnia delivering a youth peace building programme which was later evaluated as best practice globally. He continued to work for the United Nations and held positions in Belgrade and in Kosovo.

“In Kosovo, we were on a ‘peace-keeping by money mission’. Our role was to keep everyone busy working with whatever they could do; painting, labouring, whatever, so that they could then be given $300 into their household.”

By the time Montenegro became independent, Kelly was the head of the UN for the region and involved in developing the UN’s first zero energy premises there.

“There is huge potential in the south-eastern European region in terms of solar and wind power as well as biomass and hydro energy production. However, there just isn’t the same emphasis here on energy efficiency as there is in other parts of Europe. For change to happen in this region we need to have a broad coalition of people from the private sector as well as the politicians,” explains Kelly.

SEE Change Net has become the go-to think tank in the region on sustainable energy policy. The organisation works with the Renewable and Appropriate Energy Laboratory (RAEL) in Berkley, San Francisco, as well as the Postdam Institute for Climate Impact in Germany and Imperial College London.

“Ireland’s cultural sustainability, I believe, is second to none. Our sustainability when it comes to energy is appalling. At the moment Ireland is ranked second from the bottom on the list of countries who have met the new requirements for sustainability. Ireland hasn’t met its targets on hybrids or renewables or in terms of importing less fuel.

“I’m not going to be popular for saying this but we need to diversify our dairy industry. It may be one of the things we are famous for but we need a cultural shift and we need to start planning this now. Ireland also has enormous potential for wind energy but we’re just not at the races yet.”

The region where Kelly lives includes Albania, Bosnia and Herzegovina, Croatia, Kosovo, Macedonia, Montenegro and Serbia and has already experienced so much. However, he believes the ending of the story for this region is yet to be written.

“It’s wide open. There are lots of possible endings. We have the opportunity to learn from the mistakes of ‘Old Europe’. There is the possibility of membership to the EU, Croatia having already joined, but the challenges to becoming a model for sustainability in a ‘New Europe’ are still substantial.”

Kelly has also produced a Bafta award winning documentary called Finding, Family much inspired by his experience of meeting Oggi Tomic. The documentary tells the true story of Oggi who was born in Sarajevo but went to live in Cambridge.

“Oggi lived in an orphanage across the street from me and he was a constant presence in my life for many years,” Kelly explains.

“I started these festivals for my children really, Sean is 16 and Lara is 11. They are very aware of the different cultures of Ireland and Bosnia and it gives us a chance to bring wonderful Irish people to the region to celebrate culture here. We have had lots of wonderful Irish people over the years including Rory O’Neil, Panti.

“I’d really like to get Edna O’Brien over this year. Her novel Little Red Chairs is remarkable and it references this region so much. So I’m putting a call out here if anyone knows her and can help, we would love to have her here this year!”

* This article was edited on September 22nd