Many young professionals have a new mandate: Drag the boss into the 21st-century 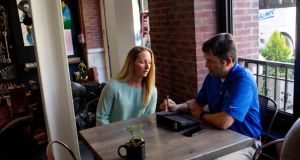 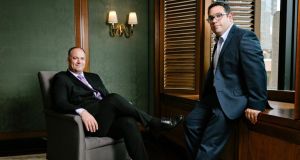 David Watson, left, a MD at Deutsche Bank, and Fernando Hernandez, an engineer at the bank who has mentored him. Photograph: Axel Dupeux/The New York Times

Junior office workers once had a fairly predictable set of daily tasks. Write the sales memo. Build the PowerPoint. Make the coffee. Now, many young professionals have a new mandate: drag the boss into the 21st century.

While businesses chase quickly fading market trends and grapple with a fast-moving future, millennial mentors, as many companies call them, have emerged as a hot accessory for executives. Young workers, some just out of college, are being pulled into formal corporate programmes to give advice to the top ranks of their companies.

Millennial mentorship programmes represent a formalised, mildly absurdist version of the advice junior workers have been giving their older colleagues for ages. Some executives want the views of young people on catering to new markets and developing new products, while others seek glorified tech support – Snapchat 101, Twitter tutorials and emoji lessons.

These programmes are not just a departure from the business world’s traditional top-down management style. They are also a sign of just how perplexed some executives are by the young people in their midst.

Companies such as Mastercard, Cisco Systems and Mars have experimented with these mentoring programmes. Inga Beale (54), chief executive of the insurance marketplace Lloyd’s of London, has said that her junior mentor, who is 19, has a “totally different perspective” and leaves her “inspired”.

Melanie Whelan (40), chief executive of SoulCycle, holds monthly meetings with her younger mentor, whom she has credited with helping her get “hip with what the kids are doing these days”.

“It’s like reconnecting with your lost youth,” said David Watson (38), a managing director at Deutsche Bank who has been mentored by Fernando Hernandez (29), an engineer in the Wall Street bank’s global markets technology division. He credited Hernandez with good tips for retaining young employees, like giving them more flexible work-from-home arrangements, and with helping him spot trends in the financial tech industry.

“It’s valuable information,” Watson said. “When you’re making decisions about budgets, or priorities, or hiring, you can actually put into practice what you learned.”

It was perhaps inevitable that older executives would turn to their young employees for advice. As technology has changed the way businesses run, it has also put power in the hands of digital natives, and left older, less tech-savvy executives angling for ways to keep up.

Couldn’t these executives just ask their children for tech tips? Sure. But workplace programmes allow executives to peer into the future of their industry and bond with a junior colleague simultaneously, with minimal embarrassment.

Reverse mentoring – another name companies give to younger people training older workers – is not a new concept. Jack Welch, while chief executive of General Electric in the 1990s, required 500 of his top managers to pair up with junior workers to learn how to use the internet.

But executives are especially eager to learn from millennials, whose dominance in Silicon Valley has given older workers a fear of obsolescence.

An entire cottage industry now peddles advice to youth-obsessed executives, with books such as Understanding Millennials and events like “Millennial Week”, a two-day festival meant to “promote and present ideas reflecting the impact of Generation Y on culture and society”.

Millennial consultants now advise companies like Oracle, Estée Lauder and HBO, charging as much as $20,000 (€17,000) per hour to give executives advice on marketing their products to young people. Overall, US organisations spent about $80 million on “generational consulting” last year, according to Source Global Research, a firm that studies the consulting industry.

Compared with the prospect of shelling out thousands of dollars for one of those outside consultants, many executives prefer the alternative of using the young people on their payroll.

“It’s a pretty smart thing for them to do,” said Malcolm Harris, author of Kids These Days, a forthcoming book about millennials and the economy. “If you can’t get a 25-year-old to run your company, you can at least tell people your chief executive is talking to 25-year-olds.”

She advised her on the proper usage of “Gucci” – a slang term used by teens to mean “good” – and gently corrected Nortman’s texting etiquette. “I told her, ‘You can’t send 10 emojis at once, that’s not okay,’” Zhong said.

For Nortman, who invests in and advises technology companies, Zhong’s lessons are not just academic. “We spend a lot of time talking about the psychology of a teen,” Nortman said. “It’s influenced a lot of perspectives around how to manage my own time, and how to invest.”

These mentoring arrangements can be initially awkward for executives who are accustomed to dispensing advice, not receiving it. When Watson, the Deutsche Bank managing director, was first paired with Hernandez through his firm’s millennial mentoring programme, he was sceptical that useful advice could come from someone nearly a decade his junior. But the experience opened his mind. Recently, he said, he had spent two hours having an impromptu chat with some younger workers in his division.

“To sit down with someone who’s on the org chart six levels below me is educational,” Watson said. “You learn about yourself, and how you differ from them.”

And the traditional mentoring benefit remains in place. “I can still learn from him, obviously,” Hernandez said. “But I hope I can teach him some stuff.”

Many of the new reverse mentoring arrangements include lessons on new technology and emerging market trends. Gerald Hassell (65), chairman of Bank of New York Mellon, asked his millennial mentor, Darah Kirstein, a 32-year-old vice-president at the bank, to help him streamline the information he got from the internet.

She set him up on TweetDeck, a Twitter app that allows for custom filters, and installed Flipboard, a digital magazine app, on his iPad. Eventually, Hassell began asking Kirstein for her thoughts on the direction of the company, and she became a trusted sounding board.

“A lot of our conversations were, how are millennials experiencing our organisational change? What advice do you have for better communicating?” Hassell said.

“The feedback was outstanding from both sides,” Sachse said. “It dispelled some of the misperceptions of millennials.”

As reverse mentoring programmes grow in popularity, some young workers still lack the traditional, top-down mentorship meant to help them rise in their careers. According to a 2016 report by Deloitte, the consulting firm, more than half of young workers said their leadership skills were not being fully developed in the workplace.

“It really is the opposite of the mentorship offer that firms have historically made to young people,” Harris said. “Now it’s just, ‘We want you to come work for us, and teach us how to do our jobs’.”

Still, many of the young mentors seem happy to dole out advice. For Kirstein, who works at Bank of New York Mellon’s Pittsburgh offices, the extra attention from Hassell, who is based in New York, has been its own reward. “I definitely get special nods here and there,” Kirstein said. “The last time Gerald was here, he called me out in a town hall in front of a lot of people. That makes you feel good.”

But millennials, traditionally defined as those born after 1982, may not have the upper hand for long. Zhong, who started a consulting firm, Zebra Intelligence, to inform businesses about teenage attitudes, says she’s already getting inquiries from people asking to be mentored by members of Gen Z, often defined as the cohort born after 1996. She is planning to start a mutual mentorship program to connect teenagers and young 20-somethings with senior-level executives, and hopefully outsource some of the work she’s been doing.

“I’m like an on-demand Gen Z support,” Zhong said. “But I can’t keep all my adult friends up-to-date on everything.” – Copyright New York Times 2017