Australia’s special power may be, as Johnson might say, its nanny-statism 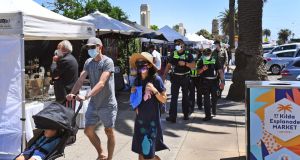 Officers patrol Melbourne’s St Kilda esplanade markets on November 8th, as Victoria’s state government announces an easing of restrictions with no new cases of Covid-19 for ninth day in a row. Photograph: William West/AFP via Getty

In a typical year, Australia makes as many ripples in British public life as you would expect from a rich, war-free country of 25 million people at the other end of the world, which is to say not many.

As a transplanted antipodean in London, this year has not felt typical.

It began with news from prime minister Boris Johnson that it did not matter if Britain failed to get the EU trade deal it wanted by the end of the year because it could always have what he called an arrangement “like Australia’s”.

This idea of an Australian-style trade deal took off like a dingo strapped to a Saturn V rocket. There were only four days in the entire month of October when the term did not appear somewhere in the British media, news databases show.

That is even more astonishing considering Australia does not actually have a comprehensive free trade agreement with the EU. And it was just the start of it.

Johnson government ministers also turned out to be interested in an Australian-style points-based immigration system and an Australian-style process of sending asylum-seekers to remote island outcrops. Then they made Tony Abbott, one of our most polarising ex-prime-ministers, a UK trade adviser.

These remorseless reminders of my homeland have in one sense been a comfort, especially since said homeland has slammed its doors shut so tightly in the pandemic that I have no clue when I will see it again.

After closing the borders in March, it has allowed just a dribble of flights from abroad to land each week, stranding so many Australians around the world for so long it has prompted questions from human rights officials.

In a more North Korean step, Canberra has also banned residents from leaving Australia’s shores, on the grounds they might spread the virus if they ever got home again.

Unsettling as these restrictions are, they raise a question I often hear from Down Under: why doesn’t Johnson have an Australian-style Covid policy? Or as a friend from the state of Victoria put it last week: “Is it really true you have 25,000 new cases a day there now?”

Australia has had fewer than 28,000 infections all year, and just over 900 deaths compared with more than 48,000 in the UK. There are many reasons for this but they include a level of basic competence that Johnson’s government has struggled to achieve, especially on the test-and-trace front.

Australia’s approach has by no means been perfect or uniformly popular.

When case numbers jumped to triple figures in Victoria’s capital of Melbourne in July, ministers imposed a blizzard of curfews, stay-home orders and travel bans that amounted to one of the world’s toughest lockdowns.

“We have to put a mask on to go from the back door to the car,” reported one stunned relative in a country town with more koalas than traffic lights, and zero daily cases.

Yet the rules endured, infections plunged and a semblance of normal life has now resumed. Could this happen in the UK? I am not sure.

If Japan’s history of mask-wearing and Taiwan’s experience of Sars helped to fight the virus, Australia’s special power may be its public safety policy prowess or as Mr Johnson might say, its nanny-statism.

Smoking has been banned on Bondi Beach since 2004. Victoria was the first place in the world to make it compulsory to wear a car seatbelt, in 1970.

In Victoria not that long ago, my other half and I went to a dinner party where he easily passed the home-kit breath test our host administered on the way out, and confidently got behind the wheel to drive home.

Within minutes he had been booked by a policeman on an empty road, for not dipping his headlights fast enough.

At the time I was livid. Today, as I start another month of lockdown life in London while Sydney friends hold US election parties, a rugged bit of Australian-style rigour has never looked better.