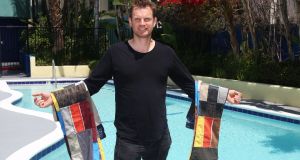 Gerry Kelly with two pairs of his signature patchwork jeans

When Gerry Kelly bought a pair of patchwork jeans in a vintage store in San Francisco in 2001, he had no idea they would change his life.

En route home from his travels around the world, Kelly ended up in California for a “couple of months”. He wanted to experience the famous counterculture festival Burning Man in the Nevada Desert for the first time and thought the jeans would be suitable attire for the week-long event.

“I was planning on staying in California for six months. Needless to say, nine Burning Mans and a pair of wrecked jeans later, I still had no desire to return to Dublin, but I did want to find a replacement pair of jeans,” he says.

His quest however didn’t bear fruit, so he decided to make his own.

“In the weeks leading up to yet another Burning Man, my wife Christine and I laid out all sorts of different colour denim patches on the living room floor and got a seamstress to put them all together. We got three pairs made in different patterns and colours.”

The pants generated huge interest and many people expressed interest in buying them. So Kelly and his wife got 100 made, and brought them to flea markets around San Francisco, where they sold like hot cakes.

“I was working in real estate at the time, but I quit to seize the opportunity to pursue my denim dream.”

Originally from Rathfarnham, Kelly left Ireland in 1996. “I had worked in a popular pub in Dublin for three years and had taken a night course in legal studies, but I wanted to travel. It was the perfect time and I took off on what was meant to be a month-long trip to Europe.

“I ended up working in London and Australia and a chance encounter in Fiji led me to San Francisco, where I ended up for 14 years in total.”

Once he created “Sonas”, which is Irish for happiness, Kelly got a mentor on board and, with his guidance, the patterns and fabrics were refined and soon a bespoke online fashion brand sonasdenim.com was born.

“We make the jeans for men and women almost exclusively from recycled or repurposed denim.

“A portion of Sonas Denim profits will go towards an animal sanctuary, which my wife, an animal rights lawyer and I are planning to start up soon.”

“Sonas denims target audience is between age 30 and 50, who love a festival- rock’n’roll vibe and are rebels at heart,” he says.

In 2014, Kelly, Christine and their four-year-old son moved to LA, the denim capital of the world, to take the business to a new level.

“I now work with independent cutting and sewing contractors and the jeans are entirely manufactured in downtown LA. Our ultimate goal is to get our own factory and expand the vegan patchwork line to include T-shirts, laptop bags, hoodies, couches and other furniture.

“We have already created an active fashionwear line, including leggings, which you can work out in or go to the club in.”

Sonas clothes have been exported to Australia, New Zealand, Europe and Africa.

Kelly says California is a great place to work, as people are oftentimes more open than they are back home.

“I think people in the US are more supportive of each other and interested in helping you succeed,” he says. “San Francisco in particular has a great entrepreneurial community. People love sharing ideas and you don’t get many naysayers.”

Kelly goes hiking every weekend with a group of entrepreneurs who “inspire and mentor each other”.

“It’s great. They want to help where they can. You feel really invigorated. It’s not something I’m familiar with in Ireland, but that could be down to the weather.”

Kelly says Californians are famously friendly and it permeates into all aspects of life. “That said, you have your setbacks and you come across people who talk the talk but let you down, but ultimately life is good out here, even if it gets too hot sometimes.”

Kelly and his wife had a clear vision of what they wanted to do from the beginning.

“I suggest anyone coming to LA or thinking of emigrating anywhere else should do the same. If you’re planning on coming over here, sort out your accommodation in advance. When I arrived, you could kip on someone’s couch or rent a place for cheap. Those days are gone now. It can be wildly expensive.

“I think in terms of the fashion business here, there are great opportunities, but you have to work hard. When I first came, I worked in bars until I got my green card, so have patience,” he adds.

There are some great accelerators and Irish networking groups in California with Irish people working across many sectors.

“These people are often very welcoming and helpful, but make contacts before you leave, or come over and check everything out first.

“If anyone wants to come to LA and start up in the fashion business, they can contact me. I might be able to give them some advice, or help them out,” Kelly says.