Wild Geese: Aircraft leasing company executive Diarmuid Hogan moved to the the US 14 years ago with his wife 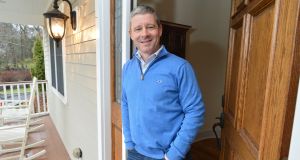 Diarmuid Hogan and his wife, Mairead, moved to the US for two years. That was back in 2003. Fourteen years later they are still there and are happily settled in Westport, Connecticut, with their two young sons.

Hogan (49) is chief financial and operating officer for the $50 billion (€44.4bn) global aircraft leasing company, GE Capital Aviation Services (Gecas), where he leads the 120-strong finance, IT and operations team of the world’s largest aircraft lessor.

Gecas has strong links with Ireland and with Shannon in particular. And prior to moving to the US, Hogan worked in financial planning and analysis with the company in Co Clare.

A chartered accountant by profession, he studied commerce at UCD before joining the audit department of KPMG in Limerick in 1989 and spending five years there.

“We got married in 2002 and my wife was based in Dublin and I was working in Shannon. I experimented with the commute for over a year – three days in Shannon and Monday and Friday in Dublin but these were the pre-M50 days and the drive was tough,” Hogan says.

“As we were discussing options, the opportunity to take a position with Gecas in the US came up. My wife’s company, Accenture, also offered her a position in their New York office and we decided to give it a go.”

Hogan’s move to the US was eased by the fact that he was already known within the Gecas organisation and had spent a lot of time in the States. The transition was much tougher on his wife, he says.

“I had a well-established social circle from playing soccer and golf and I had a lot of Irish friends there. When Mairead moved, she had my circle of friends, which was fine, but they weren’t her circle of friends and being based out of New York and living in Connecticut it wasn’t easy for her to set up her own social network. That turned out to be a lot harder on us than we had imagined.

“Being honest, it wasn’t until we bought our house and the boys arrived that our network of friends really expanded.”

With 25 international offices, there are plenty of opportunities for Gecas employees to travel. However, Tipperary-born Hogan says he needs to globetrot less than most as his role is not customer facing.

“The majority of my teams are based in Ireland so most of my travelling is back home which is very nice,” he says. “My primary focus is on helping to set the goals and strategy for the business in conjunction with the chief executive. This could be a one-year financial plan or a three-year strategic plan involving putting the framework around who we should lease aircraft to (or not!) and what countries or jurisdictions we are keen or less to work with.

“Most of my day is spent on the phone until Shannon closes and my working day is typically seven to seven. I try to get out by then to experience the joys of homework!

“The great thing about being part of a company like GE is that you get exposure to the whole organisation,” Hogan adds. “I have peers and good friends on the industrial side of GE who I talk to about how they manage an industrial manufacturing business verses how I manage a financial services team.

“Aircraft leasing is a fascinating industry and yes, there is a question as to whether the leasing market is now more or less fully penetrated. When Tony Ryan started doing it, we were talking about a 5 per cent penetration in the leasing space. Now it’s 40 per cent. So the open question is will there be multiple mergers and consolidations within leasing companies or will we still see newer entrants trying to take a share of that 40 per cent pie. I wish I knew the answer.”

Asked about the impact of the new US president on the business community, Hogan says, “With any new administration changes in policy are expected. It’s early in this administration and many of the changes that might potentially impact business are still in development or the early adoption phase. I am not anticipating any significant impact to our global commercial operations.”

Hogan says that any young Irish person contemplating a move to the US needs to be “aware of proposed policy changes and examine the impact for themselves and their families”.

“I would say that goes for anywhere. We are in an era of significant change across the globe (Brexit for example) and the change in the administration here is just one of those.

“I think the quality of our education system gives young people a head start in a variety of industries but there’s also no substitute for a willingness to work hard. There are good opportunities for people here in tech, pharma and financial services.”

Hogan sees his career in financial services continuing and has no desire to ditch it all and start his own business.

“I’m very risk averse by nature which is why getting into the accounting world wasn’t the worse move for me,” he says. “Unlike my siblings, I tend not to be the risk taker. I’m the eldest and I don’t think there’s an entrepreneurial bug waiting to come out.”