‘The Dutch have tremendous confidence in their own ability’ 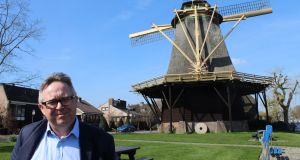 John Kiernan was two years into an engineering degree at UCD when he left to join Bank of Ireland. He didn’t walk away from education though, completing his studies in systems analysis and qualifying as an accountant.

Through the bank’s international services subsidiary, he worked in Eastern Europe and also with small American banks developing their international business.

In 2000, he realised that if he didn’t move from his position he probably never would.

“I joined a banking software company and then a financing outsourcing company where I worked for great people and learned a huge amount,” he recalls. In 2004, he moved to ACCBank and ended up as chief operating officer for Rabobank in Ireland in charge of retail operations and its European service centre.

“Working with a great team, I was able to help establish Ireland as a centre of operational excellence within the group.”

Moving abroad wasn’t on the Howth man’s agenda but it happened organically.

“I guess I’ve done things in reverse,” he says. “Usually the kids emigrate when they grow up; in our case, my wife and I did it in our fifties. Leaving our son Colin in Ireland, we brought the dog with us.”

Many of Kiernan’s classmates in the 1980s had had to emigrate and he always wondered “what if?”.

“I had developed good relations with [the bank’s] head office in Utrecht and several Dutch colleagues suggested making the move to Holland. And so I found myself in Utrecht in January 2016.”

Now head of corporate banking services with responsibility for how to service their Dutch corporate clients and food and agri customers worldwide, Kiernan says it’s “a challenging role with a global dimension. A single day can see me prioritising changes to banking systems for New York, and Latin America, advising our Asian offices on how to implement more global ways of working and ensuring our award-winning trade commodity finance service can remain so successful.”

Kiernan suggests that the necessary simplification of the businesses in Ireland indirectly led to his moving to the Netherlands.

“Increasing regulation, more onerous capital requirements and prolonged low interest rates provide huge challenges for all banks and we must constantly review the value of all our activities. It’s adapt or die.

Encouraged by their success in Ireland, Rabobank is using more and more disciplines such as Lean, formal productivity analysis and service management techniques in Utrecht to ensure it is fit for the future.

It’s a much more consensus-based way of making decisions; everyone has an opinion and expects and is expected to give it

“On a personal level, I worry about the uncertainty of Brexit on my daughter Sally and her friends who live and work in the UK. You really have to see the commercial barge traffic on the Rhine canal near where we live and also the endless chains of HGVs on the local motorways to understand the value of a single market. It’s hard to appreciate this when you’re living on a peripheral island.”

For Kiernan, the main difference between business culture in Ireland and the Netherlands is what they call “the polder model”.

“It’s a much more consensus-based way of making decisions; everyone has an opinion and expects and is expected to give it. It’s quite different to the more autonomous culture I was used to.

“Yes, it can slow down decision-making at times, but it encourages openness. The Dutch may have a reputation for being rude but they really aren’t, they’re just being direct. I find the Dutch have tremendous confidence in their own ability. Perhaps it comes from being such a successful and prosperous country over the centuries. In fact, the first options and forward contracts were based on the price of tulips in the early 1600s.”

As a prospective choice for emigration, Kiernan thinks the Netherlands might be too easy to move to.

“Everyone speaks English and it’s so near to Dublin. I’d say try to learn the language. It’s difficult and you don’t have to, but it really establishes rapport. My company were good enough to provide tuition to me and my wife, Jean, including sending me to a convent for a week.”

He takes advantage of being at the centre of Europe and enjoys being able to hop in the car to visit Paris or Heidelberg or even down to Switzerland.

There are other advantages to working in the Netherlands. “Unemployment is low (5.3 per cent) and Amsterdam is the centre for many fintech and consulting firms with English as the established business language.

“There are superb technical and business schools in places like Amsterdam, Delft and Groningen and they provide a good entrée to commercial life here.”

Kiernan and his wife have also joined InterNations, which is mainly a social community for expats and Jean is also a member of International Women’s Contact, an organisation for women who live internationally. Through this, she is working for a charity called “Not For Sale” to help trafficked women.