Wild Geese: ‘I am eager that financial services are seen as a force for good’ 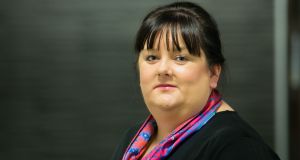 Head of commercial banking at HSBC Amanda Murphy: her 20-year career with the bank has taken her and her family to the Middle East, North America and Asia

When Dubliner Amanda Murphy left Queen’s University Belfast with a degree in law, she had no clear idea of what she wanted to work at. The Midland Bank’s graduate training programme caught her eye and, suitably impressed by what it offered, she applied.

That was in 1995. Some 20 years later her career with the bank, which has since become part of HSBC, has taken her to the Middle East, North America and Asia, where she was head of commercial banking in Indonesia.

Murphy has been based in Britain since 2013 and, prior to her promotion to head of commercial banking earlier this year, she was head of corporate banking. In her new role, she will manage a division with more than 5,000 staff and a million customers and will relocate from London to Birmingham with her husband, Andrew, three young children and two dogs.

What first attracted her to the bank’s graduate programme, she says, was its diversity.

“It offered opportunities to work in different parts of the business and to try different things. This struck me as a good way to find your calling,” she says. “From the graduate scheme, I successfully applied for HSBC’s international management programme. This has been a great experience, giving me the opportunity to live and work in Hong Kong, Canada and the UAE.

“It has also allowed me to work in many parts of the bank, including retail and corporate, risk management, training, product development and now leading a team that looks after all our commercial customers in the UK and Northern Ireland. Our customer base ranges in size from newly founded enterprises to multinational companies operating across the globe.”

With Brexit now a step closer, Murphy is not underestimating the challenges that lie ahead in her new role.

“Brexit has posed many questions for our customers, specifically around risk management and investment decisions,” she says. “The value of sterling has seen volatility since the referendum and this has made businesses using different currencies rethink their strategies. It has also led to questions about work visas and the timing around moving into new markets.”

Asked how companies can best ensure they emerge from Brexit unscathed Murphy says: “I would encourage them to consider their unique skills, what makes them different and how they can turn this into a competitive advantage.

“It is also a great time to consider doing business in markets outside Europe.”

However, she qualifies this with some of advice: “Business cultures around the world are diverse. Wherever you do business it really pays to understand the nuances of that country.”

“We’ve had a lot of different moves and sometimes Andrew [who works in strategy and consulting] has given up his job and come with me. Other times he has followed and we’ve had months of separation.

“When we were in Indonesia, he commuted to Hong Kong for work. It wouldn’t suit every couple and it hasn’t always been plain sailing, but we’ve made it work for us and our children have grown up in a diverse and multicultural environment where they don’t recognise differences of skin colour or religion and don’t have any of the baggage that goes with it.

“We have also realised how lucky we are to have had the background, education and opportunities we’ve had. It’s easy to take them for granted but they aren’t available to everyone.”

When it comes to job opportunities in the UK for Irish people, Murphy says “the UK is a great place to be an entrepreneur. A significant portion of the UK economy is made up of SMEs so there is a strong entrepreneurial community”.

“There are also many opportunities in the banking and finance sectors. I’ve found the UK a welcoming place to live. It is fair and objective. If you work hard and are good at what you do, you will get the right opportunities for advancement. I don’t think Brexit will impact on that for Irish people. There are too many of us here.”

Banks are still not flavour of the month with many people and Murphy acknowledges that dealing with that negative sentiment will be part and parcel of her new job.

“You are the public face of commercial banking for HSBC in the UK and it’s really about how we communicate the message that we’re there to support people and show them the benefits of having good partnerships and relationships with their bank.

“We are pretty consistent with our appetite for risk and I am eager that financial services are seen as a force for good. We want to help individuals and businesses achieve their dreams; whether that is buying their first home, planning for retirement, exporting into new markets or listing their company on the stock exchange.

“Our primary aim is to understand our customers and their business. Our secondary aim is to support communities and our staff did over 25,000 hours of voluntary community service last year.”

Having just been promoted, Murphy says she is committed to living in the UK for the foreseeable future. However, she is not ruling out more globetrotting.

“In the future, who knows?” she says. “I’ve always wanted to work in New York and would definitely love to return to Asia at some point and I’ve never lived in South America.”