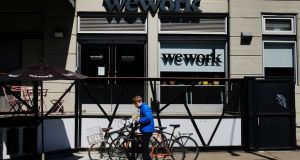 WeWork continues to advance its plans to float in 2019, despite shaky IPOs from Uber and Lyft

The New York-based shared work space manager company, founded in 2010 by Adam Neumann, who grew up on a kibbutz in Israel, and Miguel McKelvey, who was raised on a commune in Oregon, leases office space or entire buildings, splices and dices them up and rents them out on more flexible leases than traditionally offered by landlords – for higher prices.

It has more than 400,000 members spread across over 400 locations globally – including Dublin, where hot desks cost as little as €390 a month and private office space starts at €1,520 – and last year surpassed JP Morgan as the largest occupier of office space in Manhattan. While the company initially focused on start-ups as clients, with amenities such as art-filled communal areas, ping-pong tables and beer on tap to rival Silicon Valley, more and more big corporations, including Amazon, IBM, General Electric and HSBC, are signing up to use its space.

In Europe alone, the number of serviced and co-working offices has soared by over 200 per cent in the last five years, according to real estate broker Colliers International. WeWork has helped to drive this growth.

Valued recently at $47 billion (€42 billion) in a private fundraising where Japanese conglomerate SoftBank bought $2 billion of stock, it counts among the most valuable private companies globally. But, like Uber and Lyft (shares in which tumbled 18 per cent and 33 per cent, respectively, within weeks of their flotations and whose IPO investors remain out of pocket), WeWork has yet to make a profit.

Reuters reported on Friday that WeWork, or rather its parent company We Company, plans to host an analysts’ day for Wall Street banks on July 31st, indicating that it wants to leave nothing to chance after other high-profile initial public offerings (IPOs) struggled or were scrapped this year, amid pushback from investors over eye-watering valuations sought.

The first thing analysts will be looking for is a timeline – absent in both Uber and Lyft’s investor pitches – for when it expects to start making money.

Second, they should be seeking answers as to why Neumann, as widely reported on Thursday evening, has cashed out more than $700 million (€624 million) from WeWork in recent years, including share sales and taking out borrowings against some of its holdings.

While public documents relating to a company bond sale last year said that Neumann owned most of WeWork’s voting stock, his current holding is not known.

The development should raise a red flag for potential investors in a property rental business that is being valued as if it were a technology company. While WeWork’s revenues doubled last year to around $1.8 billion, it is burning through huge sums of cash and losing money.

By contrast, the world’s largest serviced office group, IWG, which operates under the Regus brand, has a unit called Spaces that is comparable to WeWork, and – more importantly – is profitable and generating pretty good cash flow, is currently valued at £3.2 billion (€3.6 billion) on the London Stock Exchange.

Neumann, also WeWork’s chief executive, said in a New York Times interview last year that to assess his company on conventional valuation metrics misses the point. WeWork, rather, is a “state of consciousness”, he argued, a generation of interconnected, emotionally intelligent entrepreneurs.

How do you put a price on that?

Manifold’s thinly-veiled barb at the Swedes

Building materials giant CRH confirmed on Tuesday that it was selling its low-margin European distribution business to private equity firm Blackstone for €1.64 billion, payable in cash. It should cut the group’s net debt to 1.7 times earnings before interest, tax, depreciation and amortisation (ebitda) by the year end, from two currently.

“The transaction . . . demonstrates the continued execution of CRH’s strategy of creating value for our shareholders through active portfolio management, the efficient allocation of capital and creating a simpler and more focused group going forward,” said chief executive Albert Manifold.

One can’t help but think that Manifold had Swedish activist investor Cevian, which disclosed an almost 3 per cent stake in CRH in February, at the forefront of this thoughts as he penned that line.

Last month, Cevian’s managing partner Christer Gardell said publicly that CRH “has become too complex, both structurally and operationally, which hampers performance and traps value”, and that “far-reaching structural and operational improvements are needed for the group’s assets to reach full potential”.

It’s not as if Manifold runs an unchecked roll-up acquisitions machine. While CRH has spent €13 billion on acquisitions since the Dubliner took charge of the group at the start of 2014, it has also sold €5 billion of low-yielding and unwanted assets that could no longer justify their existence in the group.

Will CRH’s latest sale – which, in fairness, was first flagged 14 months ago when the company started a strategic review of European distribution – be enough to appease Cevian? With the Swedes saying last month that they’ll be pushing for measures that could double its market value in three to five years, it’s unlikely.

1 Brother is dragging his heels as executor of uncle’s will - is there anything I can do?
2 Stocktake: Has Warren Buffett lost the magic touch?
3 Pet product firm’s directors restricted from involvement in companies
4 Should my mam wait for house prices to drop before buying?
5 Thailand attempts to lure travellers with luxurious lockdown options
6 Pinterest seeks new office for Dublin EMEA headquarters expansion
7 Irish whiskey sales near milestone of 12m cases a year
8 ‘I’m so lucky to be in the Caribbean – a million miles from Derry Girls’
9 Supermarkets see fastest pace of sales growth in 15 years
10 Health insurance customers to get €180m in refunds
Real news has value SUBSCRIBE