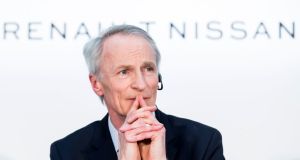 Renault-Nissan-Mitsubishi chairman Jean-Dominique Senard is trying to put the Ghosn saga behind him.

It is hard to imagine two men more different than Carlos Ghosn and Jean-Dominique Senard.

The previous head of the Renault-Nissan-Mitsubishi alliance is under house arrest in Tokyo, facing multiple corruption charges. On Thursday, the day Ghosn announced he was suing Nissan and Mitsubishi for what he views as unfair dismissal, Senard, who replaced him as CEO of Renault last January, received journalists from the Anglo-American Press Association in the company’s board room.

Senard talked about the huge challenges he faces: making the world forget the Ghosn scandal, smoothing relations with Renault’s Japanese partners, which have been stretched almost to breaking by the Ghosn saga, and steering an automotive alliance with a combined turnover of €57.4 billion last year through uncertain times.

Ghosn’s grandfather, Bisharra, left a poor Maronite village in Lebanon for Brazil at the beginning of the 20th century. He became a successful businessman. Carlos Ghosn was born in Brazil, grew up in Lebanon and was educated in France.

Ghosn and Senard were born a year apart, in 1954 and 1953. Both worked for many years with the tyre manufacturer Michelin. But where Ghosn is bold and brash, Senard is understated. Ghosn was hired to shake things up, Senard to calm them down.

Ghosn became famous in France and Japan for his flamboyant lifestyle, including bespoke Louis Vuitton suits, his daughters’ debutante balls at the Crillon Hotel and his wedding in Versailles, for which he allegedly charged Renault €50,000.

The Financial Times called Ghosn “the boss among bosses”. He was awarded the French Legion of Honour and an honorary knighthood in Britain.

Ghosn spent 100 nights a year commuting between Paris and Tokyo in a Gulfstream jet that cost €44 million. Last November 19th, he was arrested on the tarmac, accused of having cheated on Japanese taxes. Charges of misappropriaton of funds followed.

Senard has made it known he pays every penny of tax he owes.

Ghosn received salaries from both Renault and Nissan, which meant he earned up to €15 million annually. Like the late New York hotel heiress Leona Helmsley, he seemed to think that only little people pay taxes.

Senard wears a discreet gold signet ring with the seal of a papal count, the title he inherited. His family has owned a chateau and vineyards, which produce prize-winning rosé wine, at Saint-Rémy de Provence since the 17th century. Two prominent business executives in Paris whom I asked about Senard’s reputation gave the same answer: integrity.

Senard is almost shy, but affable. There is something priestlike about his gaunt features and his devotion to saving the Renault-Nissan alliance. At €450,000 per year, his salary is a fraction of Ghosn’s.

When he arrived at Renault last January, “the situation was worse than I thought”, he says. “Clearly that was linked to the Ghosn issue… There is no point me going back over it. From the beginning, I did my best to try to separate the judiciary aspects (investigations into Ghosn’s alleged financial misdoings) and the other story, the future of Renault.”

Ghosn claims to be the innocent victim of a plot by nationalist Japanese automotive executives to wrest back control from the overweening French.

There are press reports of a nationalist clique surrounding Hiroto Saikawa, the chief executive of Nissan. “Is everybody in Nissan convinced that the alliance is the future?” Senard asks. “If I say Yes, you would think I am crazy, so I’m not going to say that.… The sense of urgency is getting stronger because the performance of (Nissan) is such that the status quo seems impossible.”

Nissan attributed a 45 per cent drop in annual profits last year to the Ghosn scandal.

Senard is determined to mend the frayed relationship with Nissan. He speaks to Saikawa almost daily, and they dine together often in Japan. “Long-term relationships with Japanese companies can work very well, as long as everybody understands that the playing field is level, and nobody is humiliating anybody,” he says.

In the beginning, Saikawa and Senard talked a lot about Ghosn. “We could not imagine doing otherwise. But it’s no longer the case,” Senard says. “When I think about my recent conversations with Mr Saikawa, we did not even utter his name… People in the company want to think about their future.”

Two structural issues have constituted a “poison pill” for the Japanese: Renault owns 43 per cent of Nissan, but Nissan holds only a 15 per cent, non-voting stake in Renault. The French government’s 15 per cent stake in Renault has also been a recurring source of friction.

Senard says there is no question of addressing these issues at present. “The priority is to make sure we get things right in terms of performance. It’s better to discuss matters in a context where the business is healthy, where direction is clear, where strategy has been set.”

Senard minimised French state interference, but his first big initiative at Renault – a projected €30 billion merger with Fiat Chrysler Automobiles in June – fell through when the French government asked for more time.

Senard said a merger between Renault and Nissan is not in the cards. He is regretfully resigned to the failure of the Renault-FCA merger.

“This deal was a good one… It’s a pity that it was not possible to go further… Very clearly, I have not changed my mind… You can always dream about things, but facts are facts.”

Under Senard, the board of the alliance has been reduced to just four people: himself, Ghosn’s former deputy, Thierry Bolloré, who is director general of Renault, Saikawa and Osamu Masuko, the head of Mitsubishi.

“The previous structure was much too complex,” Senard says. Ghosn’s organisation resulted in “silos” and an inefficient “huge mess” that “frustrated everybody… because they were in the middle of nowhere and they didn’t even know to whom they reported”.

Senard says the present board is “conscious that they have a fiduciary duty”, an obligation to act in the best interests of the alliance, and that executives must not obtain personal benefits at the expense of the company or clients.

“That notion was probably not the first priority of the previous organisation,” he says.

When he was CEO of Michelin, Senard started an annual conference in Montreal called Moving On, to address mobility issues. “The automotive industry used to lead that reflection,” he says. “Now it’s a huge ecosystem… It’s about insurance companies, banks, telecommunications, you name it… We are facing a real revolution. The question for the automotive industry is what sort of leadership will it take… All these questions are linked to software.”

Senard says he worries that car manufacturers may not invest enough in new technologies “because, if the automotive industry does not bear these investments, somebody else will… anyone, even players that do not yet exist”.

Senard says the need for mass investment motivates his determination to strengthen Renault’s alliance with Nissan and Mitsubishi.

A global automotive executive survey last year showed that 78 per cent of auto executives believe fuel cell hydrogen vehicles are the cars of the future. Though the technology is in its early stages, a fuel cell combining hydrogen and oxygen can power an electric car. Unlike other electric vehicles, the range and refueling of hydrogen cars are comparable to those of conventional vehicles.

“One thing is for certain,” Senard says. “We are going to reduce the fossil link of mobility. That is in Renault’s DNA today. This company showed the direction to promote electric mobility, a very positive move.”

Carlos Ghosn built a reputation as a cost-cutter, shutting down five factories and firing 21,000 employees. Senard says no industrial leader can ever promise he will not close plants, “because markets change, cycles happen. But we can make sure that nobody suffers from that. The rule in my mind has always been, never make people suffer from economic situations, never”.

In France, Senard is viewed as a social liberal who shares the philosophy of president Emmanuel Macron. Last year, he co-authored a report on Business in the Collective Interest with the former trade union leader Nicole Notat.

Senard says he will continue to fight for what he calls sustainable capitalism. Business leaders must “be conscious of the social and environmental impact of your activities”, he says. He attributes the advent of populist movements like the gilets jaunes in France to neglect of social policy.

Europe is culturally well placed to foster sustainable capitalism, as opposed to “Anglo-Saxon capitalism” and the state capitalism that prevails in Asia, he believes.

“Europe must show the way. That is the small combat that I am trying to bring as far as I can. . . We must show it’s in the interest of our corporations to create value for people and not just for shareholders. If we don’t, we’re preparing a nightmare for the future.”

Senard quotes the father of the automobile industry, Henry Ford, in the 1930s. “A company must be run for profit, because if not, it will die. But if it is run only for profit, it will also die, because it will have forgotten its purpose.”

Carlos Ghosn (65), former CEO of Renault-Nissan-Mitsubishi, announces he is suing the Japanese carmakers for breaking his contract. Ghosn demands €15 million in damages.

John Elkann, CEO of Fiat Chrysler Automobiles (FCA), walks away from a merger with Renault when the French government asks for more time.

Ghosn is freed on bail for the second time, but remains under house arrest in Tokyo.

Nissan announces a 45 per cent drop in annual profits, to $2.8 billion, citing “the impact of recent corporate issues on sales”.

Renault says Ghosn spent €50,000 of company money on his 2016 wedding at Versailles and accuses him of diverting millions of euro to family members via a car dealership in Oman.

Ghosn resigns as CEO of Renault. He is replaced by Michelin CEO Jean-Dominique Senard, who turned 66 in March.

Nissan and Mitsubishi demand that Ghosn reimburse €7.4 million in salary, saying he signed the contract with himself.

Nissan, then Mitsubishi, fire Ghosn as CEO of their companies.

Ghosn is arrested in Tokyo on suspicion of under-reporting his income to Japanese regulatory authorities. He is imprisoned twice, totalling 130 days, and now faces four separate indictments in Japan, including two charges of aggravated breach of trust.