Why should less efficient airlines get bailout cash when Ryanair loses out?

Opinion: Ryanair and IAG unlikely to share in bailout largesse 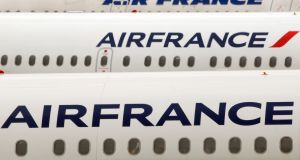 Air France-KLM and Lufthansa could end up with almost €20 billion of taxpayer cash between them. Photograph: AFP via Getty

Michael O’Leary knows plenty about state aid. Ryanair has been the focus of various subsidy disputes over the years, related to the small airports it serves. Still, you can understand his frustration at the way European governments are showering bailout money on a handful of mostly inefficient carriers, while those he views as more deserving airlines go without.

He’s threatened to go to court to force France and other wealthy countries to share rescue money out more equitably, it was reported last week, and he’s compared cash-strapped Deutsche Lufthansa of behaving like a “crack cocaine junkie”.

Thanks to the largesse of Paris and Berlin, Air France-KLM and Lufthansa could end up with almost €20 billion of taxpayer cash between them, even though they had inferior profit margins and balance sheets prior to this crisis.

It’s not just Ryanair that’s losing out. International Consolidated Airlines Group, which owns British Airways, is more profitable than its French and German rivals and it probably won’t get anywhere near as much bailout money (and isn’t asking for it). IAG, like other airlines, is making use of government wage subsidies for furloughed employees.

The disjointed way Europe is going about these rescues threatens to distort competition and makes a mockery of the imperative that responsible companies must save for a rainy day. Ultimately, it’s who you know and where you’re from that counts.

Last month the European Commission relaxed state-aid rules to help hard-hit industries overcome a crisis it deems not of their own making – though that’s debatable for airlines, which help spread the virus around the world, albeit unwittingly. As long as they abide by certain conditions, the commission is content for governments to replenish whatever cash flows out of the door because of coronavirus restrictions and to recapitalise businesses.

So far it hasn’t created a centralised pot of money to finance and adjudicate these rescues more fairly across the European Union. Instead companies have to ask their national governments for the cash.

Compared to some weaker European nations, France and Germany have more financial firepower to write big bailout checks and fewer worries about whether the funds they provide will be repaid. They also appear to have few philosophical qualms about propping up domestic companies, which in turn gives those businesses a remarkable amount of leverage in bailout talks.

Lufthansa has brazenly threatened to seek creditor protection if the details of a more than €8 billion German rescue aren’t to its liking. In contrast, the terms of Oslo’s support for Norwegian Air Shuttle are severe.

Similarly, Britain says airlines will get help only once they’ve exhausted other avenues, including tapping billionaire, tax-haven domiciled shareholders for more cash. On Tuesday, British Airways warned that it wouldn’t be getting a bailout and said as many as 12,000 jobs would be cut.

Unlike in the US, most European airlines haven’t frittered away their money on share buybacks because they didn’t have much money to begin with. The industry is more fragmented and hence profits have generally been meagre. Barring a few exceptions such as IAG and Ryanair, airlines haven’t been flush with cash.

Even before the Covid-19 crisis, Lufthansa had €6.7 billion of net debt, a similar amount of pension liabilities plus about €4 billion of advance customer payments, much of which it must now refund. It has about €4.4 billion of liquidity left, half as much as IAG. The market value of the German carrier’s shares is less than €4 billion.

It’s not surprising that governments want to protect airlines because they provide vital international connections for passengers and trade links. But they’re also heavy polluters. While Air France-KLM’s bailout includes environmental commitments, massive amounts of taxpayer cash are being diverted to propping up a dirty industry whose prospects were starting to look less rosy before the pandemic struck.

Some airlines will go bust, reducing competition, but passenger demand will probably be lower for years. Long-haul and business travel will probably take longest to recover as companies worry that it’s not safe to put staff on planes. After being bailed out, Lufthansa and Air France-KLM will have to divert more of what little cash they generate to servicing a bigger debt pile. No wonder banks and capital markets aren’t willing to lend airlines more cash without government guarantees.

Before this crisis, Ryanair’s strategy was to expand quickly and drive down fares so that rivals with higher costs would go out of business. That strategy falls down if states recapitalise less efficient airlines when they get into trouble. The lesson for the famously abrasive O’Leary is to devote less time trying to be more competitive than his rivals and more time getting cosy with politicians. – Bloomberg