Amazon ready to deliver blockbuster earnings at a high cost 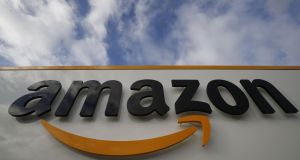 Amazon is expected to book 25 per cent more revenue in the quarter compared to the same period in 2019. Photograph: AFP via Getty

Amazon is poised to report both soaring expenses and blockbuster earnings on Thursday, making clear the initial costs of its breakneck expansion to meet the heavy demands of the coronavirus crisis.

“It’s a tale of two cities,” said Brent Thill, an analyst at Jefferies. “The top line is going to be fantastic, but I think investors are braced for a bad bottom line.”

Wall Street analysts overwhelmingly rate Amazon a strong buy due to its status as a lifeline to the stuck-at-home public and a backbone for businesses moving their operations on to the cloud.

But coronavirus-driven wage increases – which have already cost an additional $700 million (€645 million), up from an initial estimate of $350 million – are just one factor that could see the company’s costs spiral throughout the year.

“We’re looking at $1.5 billion extra each quarter,” said Scott Mushkin, chief executive of R5 Capital, which is so far the only major Wall Street analyst to give Amazon a “sell” rating ahead of Thursday’s filing.

Mr Mushkin argued that rising unemployment globally, and particularly in the US, could have an effect on the growth of Amazon’s $119-a-year Prime membership scheme, the driver of record revenues last year.

However, incredibly high demand for the basics mean the company is expected to book 25 per cent more revenue in the quarter compared to the same period in 2019, according to Wall Street estimates.

To meet that demand, Amazon has invested heavily – and swiftly – in staffing. The company is on course to hire more people in the first half of 2020 than it did in the entirety of 2019, a year that was in itself considered a period of extremely rapid growth as Amazon built out its delivery network.

Since March the company has taken on 100,000 new full and part-time staff, and recently announced it would take on 75,000 more.

However, the degree to which Amazon will keep its new workers on board beyond the coronavirus crisis is unclear – it has sometimes described the workers as “seasonal” and suggested unemployed retail workers could join the company for a short while before going back to their old jobs.

In addition to new personnel, Amazon has needed to install new equipment, such as thermal cameras, at warehouses to monitor staff health more quickly. Previously, it was using handheld thermometers.

Shift patterns have also been staggered in an attempt to prevent crowding at entrances and break times. Eventually, the company hopes to set up in-house Covid-19 testing capabilities - a necessary step to “get the economy back up and running”, chief executive Jeff Bezos told shareholders in his annual letter.

These changes might not come quickly enough to keep Mr Bezos’s operation running smoothly, with pressure mounting from legislators in Europe and the US, in response to complaints from workers groups. In France, all six of Amazon’s warehouses are currently closed until at least May 5th due to a safety dispute.

Adaptations to keep locations up and running have put great strain on the efficiencies upon which Amazon’s empire is built, said Mr Thill of Jefferies.

“Over time, we think they can get more efficiency and scale,” he said. “But short-term, there’s no real offset to the tax that has been placed on their supply chain.”

Non-retail expenses could also be a drag on Amazon’s outlook, said Dan Ives of Wedbush, with businesses hurriedly moving more of their operations into the cloud and a heavier demand for remote working, meaning Amazon has to invest further in data centre capacity and other related costs.

“Don’t think of it like it’s just ecommerce and warehousing,” he said. “There’s been a massive acceleration to the cloud. With AWS being the leader, along with Microsoft, there’s an increased expense profile that goes along with that as well.” – Copyright The Financial Times Limited 2020