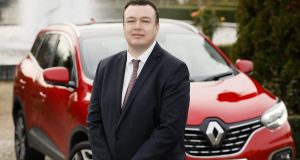 Paddy Magee: has called for a two-month cut in VRT introduced in line with the new 202 registration period starting on July 1st to support jobs in the motor trade.

A short-term cut in the tax paid on new cars is needed to save thousands of jobs in the motor trade, said Renault Ireland boss Paddy Magee.

Mr Magee, Renault’s country operations director, warned the impact from the coronavirus crisis is going to be as devastating as the financial crisis a decade ago, when new car sales fell by 60 per cent and dealers were forced to lay-off staff, while others closed.

“Our industry never fully recovered from that hit and now we are facing another equally severe crisis,” he said.

Motor dealerships are closed, apart from appointments for urgent repairs. Mr Magee said it was likely that servicing operations would resume in line with the reopening of National Car Test centres.

He said dealerships, due to their spacious showroom layouts and appointment systems, were well-suited to implement social distancing and therefore should be part of the initial wave of businesses allowed to reopen.

The new car market is down nearly 30 per cent on last year, with April registrations currently down 96 per cent.

Mr Magee is calling for a two-month cut in VRT introduced in line with the new 202 registration period starting on July 1st to support jobs, help replace older more polluting cars in the national fleet, and protect the Government’s tax income.

Amid fears that July new car sales could be down over 60 per cent even if showrooms reopen, he estimated that with an average tax take of €10,500 per new car sale (€5,500 in Vehicle Registration Tax and €4,500 in VAT), it will reduce the Exchequer’s tax take by over €162 million for the month. By offering a €3,000 tax VRT rebate, he argues fall in sales could be reduced to 30 per cent, reducing the drop in tax receipts by €22 million.

“A VRT reduction of say €3,000 in July ( 5 per cent of the average VRT on new vehicles) would see the customer getting something back, reduce CO2 levels across the current carparc, and the process would work from a Revenue level, with the tax take for the Government increased.”

He said the Government and the motor trade had worked well together on the new NOx taxes.

“The short term VRT reduction is the motor trade saying that we can support in the current climate but only if this proactive approach is taken. This short-term incentive is needed to protect the industry from dramatic job losses and to give customers support.”

He said a VRT rebate was likely to be more effective in reviving new car sales than a scrappage scheme.

“There is a reason why people currently drive an eight year-old car; they can’t afford a new one, so a scrappage scheme doesn’t really make enough difference to them.”

Renault has introduced its own incentive scheme running until July 31st, offering a three-month deferral on payments for new passenger cars purchased through the company’s bank, with a 2 per cent APR interest rate and €1,000 cashback. It is offering a similar three-month payment deferral offer on vehicles in its Dacia brand, along with its Renault Selection range of used cars.

Renaults says its in-house banking arm has been contacted by 1,500 current customers seeking deferrals and is currently working with them on these.