When it comes to the business of aviation, only the sky is the limit 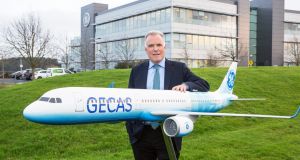 Alec Burger: “There is no shortage of liquidity in the industry. Whether it’s lending, whether it’s on the equity side, the demand, I think, for exposure to aviation finance seems very robust.” Photograph Liam Burke/Press 22

As Alec Burger settles down for our interview, he eyes the video conferencing screen in the meeting room we are using and wonders aloud if such technology is a good idea. It could potentially lessen the need for people to fly, and that would not be good for his business.

Burger is president and chief executive of Gecas – General Electric Capital Aviation Services. Gecas owns some 1,500 aircraft, worth a total of $42 billion (€40.2 billion), which it leases to airlines. To put the size of that fleet in context, Europe’s four biggest carriers – Ryanair, IAG, Air France-KLM, and Lufthansa and its subsidiaries – have about 1,450 planes between them. Clearly, Gecas is a company to which flying is very important indeed.

The US company, a subsidiary of General Electric, took over Irish aircraft leasing giant Guinness Peat Aviation (GPA), the brainchild of Ryanair founder Tony Ryan, following its failed flotation in the mid-1990s. The purchase placed the Republic, and Shannon in particular, at the heart of Gecas operations. More than 40 per cent of its 600 staff work here.

“Shannon is the epicentre of the Gecas business,” he says. “We have got 250 employees in Ireland, and the split in that is about 220 in Shannon and about 30 in Dublin. In terms of the aircraft, I think just over 50 per cent of the total aircraft are registered in Ireland.

“Shannon has been a huge part of our business for the last 20-plus years, certainly since the acquisition of GPA. Our operating centre is here, our deal underwriting and credit process is here, the majority of our finance team is here, the legal team is in Ireland.”

Burger took over the helm a year ago. He says he was struck by his colleagues’ genuine feel for the business. The old line about aviation people having kerosene in their blood seems particularly apt in Shannon HQ, he says.

Dublin is home to its helicopter leasing division, Milestone, which Gecas bought in 2014 just as oil prices started falling sharply, hitting one of the mainstays of that business: oil production and exploration. Burger is happy at how the company coped with the challenge. Gecas is now set to take advantage as the tide turns in its favour.

The core business is leasing aircraft. Simply put, Gecas buys aircraft from manufacturers such as Boeing in the US and Airbus in Europe, and leases them to airlines in return for a rent. In some cases, the carriers themselves buy the planes and sell them to Gecas, which then leases them back to the airline.

The key element is that the company owns the assets while the airlines rent them. The business also has a Luxembourg-based operation that loans airlines the cash to buy aircraft. The debt is secured against the individual planes and operates in much the same way as a mortgage: once the borrower clears the liability, they own the asset.

Typically, lessors use a mix of their own equity and debt to pay for the planes they provide to airlines. The balance generally breaks down as 75 per cent debt, 25 per cent equity. In Gecas’s case, GE Treasury, another part of its parent group, provides all the funding for its aviation finance businesses.

Burger points out that India is producing a strong stream of first-time fliers as many of its 1.2 billion people join the middle class. China, with a population of 1.6 billion, is producing new airline customers just as quickly. “I think that the demand drivers for pretty decent growth are still in place,” he says.

One perceived risk to the industry as it currently stands is Basel IV, the next set of rules governing banks and their capital. According to some, the new requirements will limit banks’ ability to lend to aircraft lessors (despite the secure nature of the returns from those businesses), forcing them to look elsewhere for the cash they need.

Will the changes have an impact?

“I think today that there is no shortage of liquidity in the industry,” Burger says. “Whether it’s lending, whether it’s on the equity side, the demand, I think, for exposure to aviation finance seems very robust.

“We see that in pretty much every corner of the world and across the product spectrums. There are certain deals out there where you are going to end up with irrational levels of competition. There are deals where you scratch your head and say, ‘I just don’t get it’, and you walk away.

“I would say that PK, which is our lending business, is in the same camp. If there is a modest trend in the lending business, it is that the opportunities look like they are slightly more attractive today than they were 12 months ago. I don’t know if that is the banks pulling back – it’s modest, right – but there are attractive opportunities. I think the returns are going to look pretty strong for the foreseeable future.”

This may open the door to other opportunities for the leasing operation. Burger believes it can continue to expand by bringing in a partner. “Almost all of the existing business is funded internally by GE Treasury. We’ve got $42 billion of assets and, within that, a modest amount of serviced assets. So look at it like this: how can we accelerate the growth of serviced assets where we continue to have the customer relationship?

“The key point is recognising that, from a GE perspective, we don’t want to go much beyond the scale of the balance sheet that we have today. But it is still a growth industry. We want to be part of the growth, and there is no reason why GE has to have 100 per cent of every deal invested. Why not have something less than that and attract somebody to invest some of their money alongside us?”

Assuming it does attract someone, they will come in as a partner with Gecas. Does he have anyone in mind? “I would say, having been on the road for six weeks looking for potential partners for this vehicle, I’d be pretty pleased with the response.”

Gecas does business with more than 250 airlines. Of those, 15-20 account for a large number of the aircraft it finances. The group as a whole offers a range of services to the aviation industry. A consultancy, Avia, will advise on how setting up an airline in the first place, through to financing the planes, and even breaking them down for parts when they have reached the end of their useful lives.

Although he jokes that Gecas has to sneak into airline car parks in the dead of night, it seems like they welcome Burger and his colleagues. “We get great access,” he says. “I’d like to think that it is not just because we have been around a long time, but also because of the calibre of people we have.”

He sees no evidence to support the view of aviation as basically divided into recently arrived, nimble low-cost carriers and lumbering legacy airlines. Burger has met many of the sector’s chief executives and chief financial officers over the past year and says there is no complacency.

“I haven’t met anybody who sits there fat, dumb and happy in the corner office,” he says. “You don’t sense that anywhere. There’s a constant changing of the guard in terms of how do we reinvent ourselves, how do we find a niche that allows us to win?” For most airlines, he adds, the key issue now is offering value to their customers.

Burger is a 25-year veteran of GE. Originally qualified as a mechanical engineer, he worked for the consultancy Bain & Co before joining GE’s equipment leasing arm. He moved to its property division in 2000, rising to become its president and chief executive. GE sold the division in 2015 in order to refocus its operations and Burger moved to Gecas.

He spent much of his first year on the road getting to know the business. Just like property, there were basics to learn as he went along, a stimulating experience he compares to “drinking from a firehose”.

“Looking at the two businesses, there is an entrepreneurial bent in both industries,” he says. “Both actually have a surprisingly concentrated group of people who really matter. The airline industry is, to me at least, a surprisingly small industry. There are a lot of conferences that I’ve had a chance to go to and you do tend to see the same people.

While you can talk about spreadsheets and returns, Burger says it is the people sitting down together who win or lose those deals. “It’s the element of trust that it’s going to get done, it’s the human touch.”

On that basis, we can assume that video conferencing will continue to take second place to face-to-face meetings for some time to come.

Why is he in the news? Burger is one year in the job this month and will be one of the many industry leaders in Dublin for the 19 Annual Global Airfinance Conference on January 17th-19th.

Career: Graduated in mechanical engineering from Trinity College in Hartford, Connecticut. Worked for Bain & Co before joining GE, where he began in equipment leasing. He moved to real estate in 2000 and rose to lead that division before taking the reins at Gecas on January 1st, 2016.

Family: Married for 25 years with two sons in their early 20s.

Interests: Burger is heavily involved with the Multiple Sclerosis Society (his father had the disease), loves all sports and is reputedly a good tennis player.

Something you might expect: He is a big NFL fan.

Something that might surprise: His other favourite sport is rugby. He spent the first 13 years of his life in the UK, courtesy of an English mother.